The 2017 World Junior Championship is just around the corner and Wild fans will find plenty of exciting prospects going for gold in Toronto and Montreal. For just the eighth time in the 16 tournaments the franchise has been around, the team will have at least four drafted players in the tournament (two tourneys featured five prospects and one had six).

But it’s not just the numbers that matter. The big pre-tournament news for the Wild is that two of the four prospects at World Juniors are set to captain their national squads. Luke Kunin, captain of the University of Wisconsin Badgers, will captain Team USA. Meanwhile, Joel Eriksson Ek, who made his NHL debut earlier this season, will captain the Swedish side.

It’s the first time since 2013, when Christoph Bertschy captained Switzerland, that the Wild will have a prospect captaining a team. And it will be just the second time in franchise history that they’ll have more than one player serving as captain. The other time was the 2012 tournament when three Wild prospects wore the “C”: Mikael Granlund (Finland), Johan Larsson (Sweden) and Jason Zucker (USA). 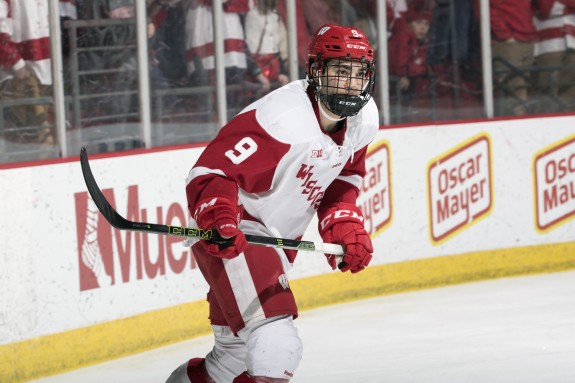 When the Wild selected Kunin in the first round of the 2016 draft, it wasn’t his scoring prowess or defensive play that was the first talking point for many. Instead, it was his character and leadership skills being praised. Talking about leadership, character and being a “locker room” guy can frequently be a euphemism for “has no other skills,” but that’s not the case with Kunin.

Selected 15th overall, the sophomore is putting up more than a point per game with the Badgers, who are digging themselves out of the basement after a disappointing 2015-16 campaign. Kunin’s team-leading 11 goals (11-6-17) in 16 games is a great start for the future Wild.

“We have a lot of leaders in that locker room so we’re all excited and ready to get going,” Kunin told NHL.com. “I don’t think I need to change anything too much [as captain]. I just need to play my game, be the hardest working guy and most competitive guy whenever I step on the ice. I’ll do my thing and hope the rest of the guys follow.”

He’s well-respected by teammates everywhere he goes and it shows. This summer he became the first sophomore captain of the Badgers in 41 years. He’s also worn the “C” for the U.S. National Development Team Program and for Team USA at the U18 World Championship. It’s a good sign for a young player who should also be a leader on the scoreboard during the tournament as the U.S. looks for a medal again this year.

Eriksson Ek’s cup of coffee in the NHL may have been too short. He was excellent, showing a developing defensive game and an ability to create offense as he posted two goals and five points in his first nine NHL contests.

His return to the Swedish league is an effort to see his offensive skills continue to flourish. The 2015 first-round draft pick is expected to be a star for the Wild in the not too distant future and should be a roster regular next season if he continues moving in the direction he already has. (Though his production with Färjestad has been tepid since scoring in his first game back.)

At August’s evaluation camp in Plymouth, Eriksson Ek was repeatedly a standout. His strength, speed and agility will mean that the Swedes lean on him in all situations.

In last year’s tournament, Eriksson Ek was an important piece of the puzzle for Team Sweden, starting on a line with the Nylander brothers (one of which was injured in the Sweden’s opening contest). He didn’t score a ton — he posted just one goal and one assist in six games — but he played solid two-way hockey and had far more opportunities than the final stats show.

This year presents a special opportunity for Eriksson Ek to be a juggernaut as Sweden tries to track down a medal after finishing fourth in the last two tournaments.

As mentioned earlier, the Wild have two other prospects expected to be in the lineup when the tournament kicks off on Dec. 26. Potential late-round steal Kirill Kaprizov is expected to be a top-line wing for Russia and big Jordan Greenway will take on a significant role for Team USA on the wing as well.

Greenway was a standout at August’s evaluation camp (as well as at the Wild’s development camp). The 6-foot-5 19-year-old wing is a strong player and against players in his age group he’s been able to use his size to protect the puck and control space in front of the net, like he did on the below goal at August’s national team evaluation camp.

Kaprizov, who is likely to spend at least one more season in the KHL, has been incredible playing in Russia. This season he has already posted 15 goals and 30 points in 37 games. Those 30 points rank third all-time for a U20 player in the KHL. The only two seasons ahead of him are both from Evgeni Kuznetsov, putting him above performances from Pavel Buchnevich, Vladimir Tarasenko and Artemi Panarin, among others.

Kaprizov has been outstanding and should be one of Russia’s top producing forwards at the tournament.

Having prospects who are the best player on their team isn’t something that’s happened for the Wild in quite a while. Now, that class of 2012 — including Granlund, Zucker and Jonas Brodin — have significant roles with the NHL club. That should be enough to get Wild fans excited for the World Juniors with hopes that the club is seeing the next generation of stars emerge as the calendar rolls over to 2017.