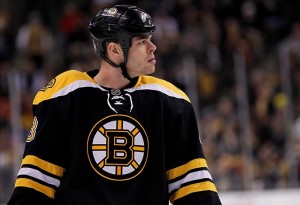 Nathan Horton knows about being clutch. You’ve heard this narrative before.

“You did it again! I can’t believe it,” said Thomas.

Horton did it again on Tuesday night.

In the team’s sixth game of the season against the New Jersey Devils, Horton scored the game-tying goal with less than five minutes remaining in the third period, sending the game to overtime and an eventual 2-1 Bruins win.

“That’s what it’s all about,” said a smiling Horton after the game. “That’s what we talked about, you’re not always going to be at your best, but we pull through. You’re down a goal, you’re down two goals, it doesn’t matter you just work hard and fight back. That’s the kind of team we are and the kind of guys we are on our team. We all know we can come back when we’re down and I think that’s what makes us so good.”

The same player who was concussed just a little over a year ago causing him to miss the remainder of the 2012 season and postseason, picked up in 2013 exactly where he left off–helping his hockey team win games.

“What he’s been through,” said Bruins coach Claude Julien, “starting back a few years ago with that hit in the Finals and then to come back last year and going through that again; to see how he’s recovered and how well he competes, he’s going in the corner and he’s battling, he’s physically involved. We know he’s got good strength, he’s a great skater, great shot and he’s utilizing all his tools right now. Doesn’t seem to be anything holding him back”

In the shootout, it was Brad Marchand who beat Johan Hedberg in the sixth round to clinch the win for the Bruins who improved to 5-0-1 on the season.

“All I could hear was Segs [Tyler Seguin] saying ‘go high, go high,’” said Marchand after the game. “But, I just kind of blacked out. I don’t know what happened.

“I just made a move and shot and looked back, and it was in.”

It wasn’t easy for the Bruins who looked tired after playing in their first set of back-to-back games this season. The team looked tired for most of the duration, stretching out passes, getting out-muscled on the chase to the puck and not generating enough of momentum in the offensive zone.

“They are a hard team to play against, and that’s why I think I’m really proud of the way our guys handled it tonight,” said Julien. “Because they were here waiting for us, well-rested, and then we had to come out extremely good to beat them. So I give our team a lot of credit, because they played a good game, and until the last few minutes of the third they were leading us one-nothing.”

Tuesday’s game also marked the first time the Bruins allowed a goal on the penalty-kill, a streak that snapped at 24 perfect conversions to start the season. David Clarkson had the only goal of the game for the Devils, a nifty tip-in from Marek Zidlicky’s shot on the point.

But still, it was Horton who was the star once again for the team. The returning winger has already made his presence felt this season, riding a four-game point streak and being tied for team lead in goals with three alongside Brad Marchand.

“It feels great to contribute and help the team,” said Horton. “Whether it’s anything, a hit. I’m just trying to work hard and do the best I can and not let my teammates down.”