The Canadiens are about to face a major challenge. Monday, the club announced that center Alex Galchenyuk is out indefinitely with a lower-body injury.

They’ve offered few details, but he went for tests Monday in St. Louis and the team will update his situation in the near future.

He suffered the injury Sunday afternoon against the Los Angeles Kings.

It’s a major blow for the Habs. Galchenyuk leads the team in both goals (9) and points (23) on the season. It will put extra pressure on the team’s other top forwards — Alexander Radulov (5-16-21), Max Pacioretty (7-11-18), Brendan Gallagher (5-9-14) — to produce offense in front of outstanding goaltending from Carey Price, whose .942 save percentage ranks second in the NHL.

After signing a one-year deal worth $750,000, Enroth has played in just six games behind Frederik Andersen. He’s posted an .872 save percentage and hasn’t looked at all like the goalie who posted a .922 save percentage in limited appearance with the Kings last year.

There are reports that former Flames netminder Karri Ramo is about to get medical clearance to play for the first time this season. With offseason surgery, Ramo didn’t get a new contract in free agency but has practiced with the Leafs earlier in the season. That’s fueling speculation that the Leafs may offer Ramo a contract and put him above Enroth on the depth chart. 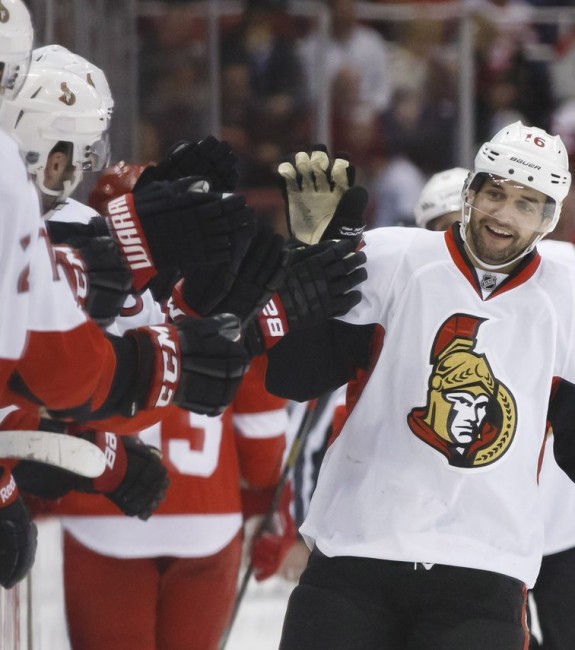 Senators forward Clarke MacArthur is eyeing January for a return to game action.

MacArthur missed all but four games last season dealing with concussions and was dealt a major setback after taking a headshot during training camp from teammate Patrick Sieloff. That’s prevented him from playing any games so far this season.

Despite suffering a couple of concussions, MacArthur is determined to get back on the ice. “That’s my full intention if they will clear me to play. I want to play for sure,” MacArthur said to Bruce Garrioch of the Ottawa Citizen. “Things are slowly getting better. They never know when they’re going to actually clear you but I’m going to keep taking the next steps and hopefully get into contact by the end of the (California swing). We’ve got to do the tests but if I’m medically cleared, I’m for sure playing.”

Ottawa could use the offensive boost. Their 2.24 goals per game in all situations ranks 27th in the NHL.

In an 8-2 drubbing at the hands of the Flames, Ducks goaltender Jonathan Bernier was offered no quarter. Coach Randy Carlyle couldn’t extend a reprieve because John Gibson, serving as backup, had a stomach bug.

“We had to leave Bernier in the net because Gibson had diarrhea and had the flu all day,” Carlyle candidly said after the game, per Postmedia’s Kristen Odland. Had Gibson not been beset with bottom issues, Carlyle says he would have pulled Bernier after the fourth goal at 12:55 of the second period.

Dorsett to Have Surgery

Vancouver winger Derek Dorsett has spent all but 14 games of the season on injured reserve. The team announced Monday that he will undergo “cervical disc surgery in his neck.”

“The decision to perform surgery was made after a thorough review of Derek’s options including non-surgical treatment and rehabilitation,” said general manager Jim Benning. “Derek, our Canucks medical team and Dr. Watkins believe that surgery offers the best outcome both for his career and long-term health. Derek is an important member of our team and we are confident in a full recovery.”

The team did not offer a timeline on his recovery but noted that a timeline will be assessed after the surgery has been completed.

The 27-man roster has a rogue’s gallery of high-end forward talent, as well as top draft prospect goaltender Jake Oettinger from Boston University.

“This is a talented, versatile group of players that has found success across all levels of hockey,” said Jim Johannson, USA Hockey’s assistant executive director of hockey operations and the general manager of the WJC team. “There is depth at every position, and while we still have some difficult decisions to make, we feel each of these players can fit the style of hockey Coach [Bob] Motzko first implemented at our National Junior Evaluation Camp last August.”

The AHL’s Hersey Bears have held their annual Teddy Bear Toss and set a team record by collecting 20,662 teddy bears in the avalanche of stuffed animals that followed a first-period goal from Garrett Mitchell.

– The Flames have assigned Hunter Shinkaruk to the Stockton Heat of the AHL.

– Hockey Canada has announced the roster for the U18 women’s team for the 2017 IIHF U18 Women’s World Championship. The tournament is scheduled to kick off Jan. 7 in the Czech Republic.

– USCHO rankings for men’s collegiate hockey are out for the week and see Duluth clinging to their spot atop the nation for the third straight week.