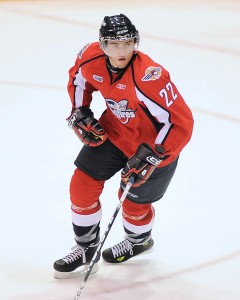 Originally from Livingston, New Jersey, Nick Ebert has taken his game to a whole new level in the last few years. Ebert was playing in the USHL with the Waterloo Black Hawks at the age of 15, a remarkable feat, and now he’s taken his talents north to the OHL, playing his first season with the Windsor Spitfires in 2010-2011. He was lighting up the New Jersey high school circuit just a couple of years ago, once scoring two shorthanded goals on the same penalty-kill. Now that he’s playing at a higher level in the OHL, Ebert is still getting better every game. During the 2010-2011 season, Ebert put up 41 points in 64 games while scoring 11 times. Some of Ebert’s current hockey idols include Drew Doughty and Jack Johnson of the Los Angeles Kings, and one of his all-time favourites is former Devil, Scott Stevens. Scouts believe that Ebert can be a similar player to Johnson, and maybe even a little bit better. Like Stevens, Ebert is a great two-way defenseman who certainly isn’t afraid to get involved in the physical side of the game.  For now Ebert looks to build on his skills, get stronger, solidify his spot as America’s top NHL Draft prospect, and hopefully hear his name called early in the 2012 NHL Draft.

If there’s one specific thing that Nick Ebert will look to improve upon this season, it’s his decision-making on the ice. There’s no doubt he has the skills to play pro hockey for a long time, but some scouts worry that because he tends to turn the puck over, and doesn’t always make the smartest passes, Ebert might have difficulty adjusting to the next level. With the Windsor Spitfires trading away star players Jack Campbell (to the Soo), and Tom Kuhnhackl (to Niagara) this week, Ebert is now being looked at to be a leader on what has become a young, and apparently, rebuilding team. Even though he hasn’t even been drafted into the NHL yet, Nick will have to take on the responsibility that typically belongs to older, more experienced players, and he’ll have to do it quickly. This can only help Ebert’s growth as a player, as it will force him to be more responsible on the ice, as well as staying responsible off it, and it should certainly help him make better decisions with the puck, because he’ll know that younger teammates will be using him as a role model to better themselves as players.

Nick Ebert is currently ranked ninth overall in the International Scouting Services’ rankings of prospects, putting him ahead of players such as Griffin Reinhart and Matia Marcantuoni. There is no question that Ebert can be picked ahead of both of those players in June, and he’s still expected to move up a few spots in the rankings over the course of the season. Through 18 games this season, Ebert has 8 points, and even though Windsor head coach Bob Boughner might like a little more point production from him, Ebert’s still holding steady on the ISS’s list due to his low plus-minus rating.

Ebert first skated at around three years of age, and was playing full-equipment hockey at the age of four, playing up a year in age every season he played travel hockey. He’s still a big-time New Jersey Devils fan, and Ebert admits that he thinks about things such as playing in the World Junior Championships, or playing in the Olympics, everyday. But at the moment, his main goal is to walk up onto that podium in June, and have his name on the back of an NHL jersey. Don’t expect him to play in the NHL next season (it’s very unlikely right now), so it is possible that Ebert could be wearing a “C” on the front of his jersey for the Spitfires in 2012-2013. Current team captain and fellow defenseman Adrian Robertson will be a good role model for Ebert this season, meaning Ebert could be ready to take the reins from him soon.