Nobody would’ve predicted it. Ganger started the evening with just 5 goals and 17 assists for the entire season. Only one of those points, an assist, came against the Blackhawks in the past 3 match ups. 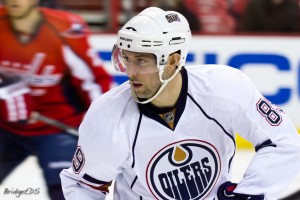 Thursday night in Edmonton, however, Gagner scored no less than 4 goals and 4 assists – having a hand in every single one of the Oilers’ 8 goals for the night, putting him in the Oilers record books alongside Wayne Gretzky and Paul Coffey and  for a team record. Moreover, it was the first time it had happened anywhere in the NHL in 23 years. To top that off, it was only the second time in league history that one player scored in all 8 points that their team scored – a feat first performed by Mario Lemieux. (Lemieux not only scored 8 goals in one game, but he did so three times in his career. Gretzky did it just twice.)

If the first period was any indication, this should have been Chicago’s night. Jamal Mayers opened the scoring at 6:29 in the first, and Patrick Sharp stretched the lead to 2-0 at just 0:40 into the second. Everything up until that moment pointed to the Hawks being in command for the game; they were outshooting the Oilers 15-9, they had the majority of puck possession; they were dominant in the Oilers end.

Taylor Hall then broke the seal for Edmonton at the 2:22 mark, with an assist from Gagner. While a soft goal can help slow or change momentum, it has to be unacceptable to the Blackhawks for it have swung as far in the opposite direction as it could after that point. The next goal, at 7:26 in the second, was Gagner’s first goal. At that point, the Hawks started looking shaky, and then Ryan Whitney scored, with an assist from Gagner, at 12:23. The Blackhawks tied it back up with Sharp’s second goal at 15:33, but it would be the last time the two teams would be tied.

Corey Crawford was still in net as the third opened, but after goals to open the third by Gagner and then Cam Barker, he was yanked and Ray Emery sent in. Dave Bolland gave fans brief hope with a goal at the 5:57 mark to draw the game within one goal (5-4), but Gagner’s hat trick goal at 6:25 completely deflated the Blackhawks. From that point out, it just looked like the Blackhawks were trying to prevent more scoring – unsuccessfully, by the way, as Gagner put in his fourth goal at 14:31, and then contributed to Jordan Eberle’s goal at 16:15.

Where to begin on Chicago’s issues for the evening? As messy as the goaltending was, the Blackhawks also couldn’t stay out of the box, taking an unusual seven penalties, meaning they spent almost a quarter of the game shorthanded. The last time the Blackhawks were in Edmonton, they gave up 4 PPG; on Thursday, they managed to give up just 1 goal (85.7% PK) , so that was the one bright spot (however small) in the evening.

After the game, team Captain Jonathan Toews stated, “We just didn’t do the right things at all. We let them do whatever they wanted. Tap-in goals, left and right. We hung our goaltenders out to dry. It comes down to us. The attitude we came in with is all we’re thinking about is scoring goals, and we’re not worried about our own end.”

Whether or not the team has realized it themselves prior to this point, the Blackhawks season has all too clearly been full of games played that way. Perhaps it is inevitable that on a team full of offensive powerhouses, that at times, the desire to score – and score big, especially in a barn where your team was previously humiliated – might override the sensibility that defense needs to come first, that once you take care of the little things, that scoring will naturally follow.

Naturally, fans are calling for a bag skate, although that really isn’t an answer. Fans are also calling for a goalie trade, not feeling confident about Crawford or Emery. Every fan has an opinion about what will magically “fix” the team, but ultimately, the fix has to come from within. The players need to have a team meeting and set themselves straight. Every player on the team has to accept their share of the responsibility for the nagging little problems that have plagued the team all season. The Blackhawks always have swagger, but they need to have confidence – in themselves, in each other, in their goalies – and it needs to show.

There is no doubt the team has personal chemistry. If you attend a practice, you can see it by how relaxed the players are around one another; how they’ll joke around and share smiles and laughs. The players hang out together off the ice. The atmosphere compared to the 2010-2011 Blackhawks is noticeably different. During last season, at open practices, it was clear that the team was playing with the weight of their Cup win and the loss of their teammates over the summer hanging over their heads. The players added to the mix never seemed to fully “fit”; the sweet chemistry of the 2009-2010 team was gone.

There are a few players who are questionable at this point. Bryan Bickell’s season has been a mess. Michael Frolik is struggling to score again. Daniel Carcillo, who was a more positive addition than expected, saw his season end through injury. Andrew Brunette isn’t putting up his usual numbers. Patrick Kane hasn’t been scoring goals at his usual clip, although he’s been chipping in plenty of assists. Corey Crawford is having a bad sophomore slump (worse than Jimmy Howard, but definitely better than Steve Mason.) Coach Quenneville is starting to get the heat from fans, too. In fact, to listen to fans, you’d think it would be easy for Stan Bowman to just package all those players up and swap them off to some other, unsuspecting team and get back the magic pieces that will complete the puzzle.

Bowman can move around all the pieces he wants. The team is still looking for another defenseman, ideally in the mold of Brent Seabrook, but whether the team will find one by the deadline without giving up something big in return is a question mark.

But at the end of the day, the Blackhawks need to take a good, long look in the mirror. Then they need to look at each other, and as the saying goes in Chicago, “Commit to the Indian” — and most of all, recommit to each other,  commit to support, support, support each other on the ice. Hockey is a team game; it is not about singular glory. As Toews stated tonight, the focus should not be on scoring goals. Scoring goals will come if the basics are taken care of first.

There is no magic player who can be brought in at the trade deadline and *voila!*, instantly transform this team. No matter what happens, the Blackhawks have to find it within themselves. They have to find that drive, that desire, that turned them into champions in 2010, and they need to channel it once again.