The last Toronto Maple Leafs home victory over the San Jose Sharks was back on January 29, 2002. That streak did not end the first time San Jose faced Auston Matthews and Frederik Andersen in Toronto.

The Sharks would be without their best defenseman, Marc-Edouard Vlasic, who missed his first game of the season. The loss of the defensive presence that Vlasic provides cannot be overstated. The offense struggled all night (except Mikkel Boedker) to get any real sustained pressure but still found a way late in the game to salvage a point.

The Sharks and Leafs started awkwardly as the two teams lost a forward early to injuries. San Jose’s Tommy Wingels would be dangerously hit from behind by Matt Martin and headed off the ice. Martin would get a minor penalty for the infraction, and during the ensuing power play, Zach Hyman would block a Brent Burns shot and drop to the ice in a heap. Both Hyman and Wingels would return later in the period.

Toronto would be the first on the board as William Nylander would dish to San Ramon, CA native Auston Matthews. Matthews’ shot would be tipped by defenseman Dylan DeMelo and be tipped again by Zach Hyman past Martin Jones for the game’s opening goal.

After blocking a shot earlier in the period Zach Hyman gave the Leafs a 1-0 lead. #TMLtalk https://t.co/USAHrwHuKq

The Sharks power play would have a pair of chances to get the Sharks on the board but little came of the four minutes of man-advantage time.

Toronto would buzz around the net for much of the final three minutes of the first period forcing Martin Jones to be sharp. The Hyman-Matthews-Nylander line would be especially dangerous with Matthew’s strong drive to the net with 1:31 left in the first nearly being the second point of the period for the 2016 first overall pick.

Frederik Andersen stopped all 14 shots he faced in the opening frame but gave up some juicy rebounds that the Sharks could not convert into goals.

The Sharks would start to get their feet under them to start the middle frame. Mikkel Boedker would get a second good chance on Andersen with a power move to the net, but the former Anaheim Ducks netminder would stymie the snakebitten Sharks forward again.

The Sharks would catch a break when Nazem Kadri‘s goaltender interference penalty would waive off the Morgan Rielly goal, despite Leafs coach Mike Babcock’s challenge of the call. The Leafs would kill off the ensuing Sharks power play.

With both Tommy Wingels and Matt Nieto in the penalty box, Auston Matthews would catch Martin Jones for his 13th goal of the year. Jones left pad was off the ice anticipating a pass across the crease and Matthews quick shot went under the Sharks goaltender.

Auston Matthews fakes the backdoor pass and then fires it past Martin Jones pic.twitter.com/kxjwk5z48F

Zach Hyman would have one of the best chances on a Sharks power play with a shorthanded breakaway, but Jones would take away the five-hole and stop the quick winger.

Boedker would continue his impressive play with a pair of strong chances on net, but no reward for the Sharks best forward of the night.

The Sharks would get good pressure to kick-off the third period trailing 2-0. San Jose’s pressure would get Andersen and the Leafs defense running around in their zone but again would come up empty handed in the first six minutes of action.

The Sharks would continue to press and finally would break the shutout at 12:43 of the third period. Justin Braun joined the rush and after a slick saucer pass from Chris Tierney he unleashed a spinning bar down backhander that seemed to surprise everyone one the ice, including himself.

You're not stopping that. Unreal backhand.

Just 2:07 later on their sixth power play of the night, Brent Burns would wrist a shot on net that would be tipped by Joe Pavelski to tie the game 2-2 with just over five minutes left.

As is the custom for the three-on-three overtime period, the action would be fast and furious. Jones would stone Reilly’s toe-drag move for the best chance for the Leafs and Kevin Labanc would have a pair of good chances for the Sharks, including a partial break.

Despite the numerous chances for each side, nothing would be decided and the Sharks would head to the shootout for the first time this season. On the back of three saves by Martin Jones and a Logan Couture shootout goal, the Sharks amazingly would leave the Air Canada Centre with a pair of points. 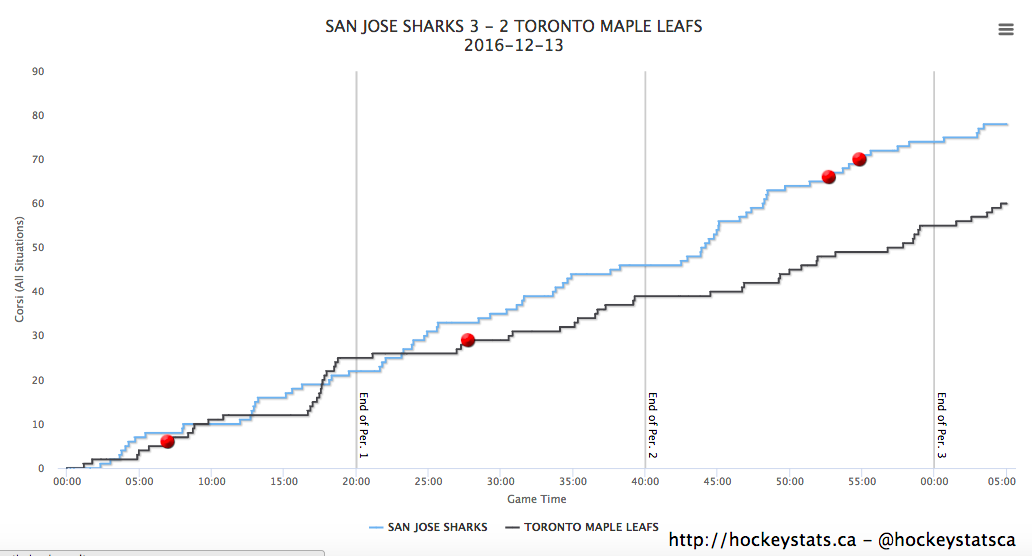 Nikitas Soshnikov – Save by Jones