What is the most entertaining aspect in hockey for the non-traditional fan? Other than fighting, it is goals. For that reason, the National Hockey League is clamoring for more of it. The league has explored — and is still exploring — nearly every avenue of the game to alter in order to amount more scoring.

Already, the league has put restrictions on goalie equipment, limiting the size of the leg pads. Before the rule change, goalies were allowed to have at most 11 inches of coverage above the center of the knee. In the 2013-14 season, that number was changed to just nine inches. That meant approximately a four-inch loss in five-hole coverage.

However, that has proven to not be enough. Goalies are increasingly getting bigger and better, making it more difficult for shooters to score.

So, the league is looking at other alternatives.

At the annual fall general managers meeting in November, the main topic of discussion was the possibility of larger nets. Though it may sound far-fetched, the league is not ruling it out in the future. However, there are several issues with this proposal.

The entire aspect of goaltending changes with larger nets. It alters the angles and skating mechanics of how goalies play. Everything about goaltending is muscle memory. When the only responsibility a goalie has is to keep the puck from entering the net, changing the size can only lead to disastrous results and quite possibly the end of some careers for those not able to change.

Lastly, larger nets will change the record books. Yes, goalies have gotten significantly better and equipment has evolutionized from when Wayne Gretzky potted 92 goals in 1981-82 but so have the players. If Alexander Ovechkin played during the 1980’s, he could arguably put up well over 100 goals year after year.

An alternative take on how to solve the league’s scoring problem came from hall-of-fame defenseman and current Florida Panthers television color commentator Denis Potvin — why not shorten the length of hockey sticks?

“Only five or six teams in the NHL have a power-play higher than 20-percent, which is pathetic,” said Potvin. “The penalty-killers have such an advantage because you can have a really long stick. You’d have more offense because the shorter sticks won’t allow you cover as much ice.

“In the ’70s [and] ’80s, sticks were 55 inches long from the heel of the stick to the end of the shaft. I’ve tried [the longer sticks], and for me, they’re very uncomfortable. They are just too long. Let’s say you force every player to 60 inches, it would still leave a player with plenty of hockey stick [to use].”

No stick shall exceed sixty-three inches (63″) in length from the heel to the end of the shaft nor more than twelve and one-half inches (121/2″) from the heel to the end of the blade. Requests for an exception to the length of the shaft (only) may be submitted in writing to and must be approved by the League’s Hockey Operations Department prior to any such stick being approved for use. Only players 6’6” tall or more will be considered for exception. Maximum length of a stick granted an exception under this rule is sixty-five inches (65”). 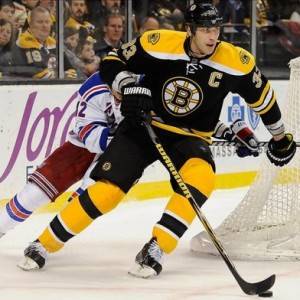 Boston Bruins defenseman Zdeno Chara, who stands 7-feet on skates, has the longest stick in the league at 65 inches.

Shortening the height of sticks by two or three inches will not be as significant of a difference to the game compared to altering nets and goalie equipment. This rule would make it more difficult for defenders to deflect pucks away and will result in more offense, thus more goals.

“If you want to generate more offense, don’t make the net bigger and make the goaltenders have less equipment,” said Potvin. “Just let the players move the puck around even more.”

The game is fine the way it is. But if the league desperately wants more goals, shortening sticks will give them that result without affecting the overall game greatly.

Colin Fitts is a Nashville Predators staff writer for The Hockey Writers. You can follow Colin on Twitter, @FittsTHW, and e-mail him at 22fitts@gmail.com.

Colin Fitts is a Nashville Predators staff writer and is a credentialed media member of the Chicago Wolves. From Nashville, Tennessee, Colin majors in journalism and public relations at Columbia College Chicago. Follow him on Twitter, @FittsTHW. Email: 22fitts [at] gmail [dot] com.