The Tampa Bay Lightning are just more than a quarter of the way through the 2016-17 regular season, but have faced their share of adversity to get here.

After coming one win shy of a return to the Stanley Cup Final during last year’s playoffs and after beating the odds this offseason to ice virtually the same roster for the third straight year, expectations have been sky-high.

So after being outscored a combined 9-4 in two-straight losses to the Columbus Blue Jackets and the Boston Bruins, is it time to be concerned?

The Lightning opened the regular season by rattling off three wins in a row for the second straight year and five of their first six games, but from there, things got a little more interesting.

They dropped six of their next nine games, while losing Jonathan Drouin and Anton Stralman in the process. Drouin was injured on Nov. 1 and missed eight games before returning to the lineup, while Stralman suffered an upper-body on Nov. 12 and has missed the last eight contests.

The team has managed to win five of their last eight games, despite losing captain Steven Stamkos to a right knee injury on Nov. 15, with an expected recovery time of at least four months. For the Lightning, it’s an unfortunate situation they have been in before, having ended the 2015-16 regular season and playing all but one game in the playoffs without Stamkos.

In the 2015-16 regular season, the Lightning were 11-9-3 through 23 games. At that point, they had a healthy Stamkos and Stralman in the lineup, but were battling injuries to Tyler Johnson (who was playing through it) and Ondrej Palat. There were also distractions off the ice with the uncertainty of the futures of Stamkos and Drouin.

This year’s team is 13-9-1 and in third place in the Atlantic Division with 29 points. If the playoffs started today, and they don’t, the Lightning would be the sixth seed in the Eastern Conference. It’s not a bad place to be in after being without a top-six forward and a top-pairing defenseman for more than a third of the season and their captain for the foreseeable future.

The two biggest strengths of this Lightning team, outside of their depth, have been the goaltending tandem of Ben Bishop and Andrei Vasilevskiy and the performance of their special teams units.

Bishop and Vasilevskiy give the Lightning one of the strongest goaltending units in the NHL and this has been on display on a near nightly basis through the first 23 games of the season. Bishop is the starting goaltender and has gotten the call in 15 games, while posting a 7-8-0 record with a 3.04 goals-against average and .902 save percentage. In eight games of action, Vasilevskiy is 6-1-1 with a 1.50 goals-against average and a .951 save percentage.

Both goaltenders have made tough saves and have often come up big in tight games or when the Lightning’s offense has lacked. The speculation continues about Bishop’s future with the organization, but it’s possible you see both goaltenders on this roster through the end of 2016-17.

The ability to roll with a 1-A and 1-B is a luxury the team has now, but becomes solid gold in what they hope is a deep playoff run. If general manager Steve Yzerman receives an out of this world offer, he will listen, but holding on to both netminders seems like the more probable outcome.

The Lightning have benefited from their special teams units through the early part of 2016-17 and it’s part of what has earned them 13 wins. The power play unit, often one of the team’s weakest areas in 2015-16, is operating at a 23.5% success rate and is fourth in the NHL, while the penalty killing unit is 11th at 83.3%.

Cooper has acknowledged the team’s power play as being an important aspect of their game, and much improved with the addition of assistant coach Todd Richards, who joined the team this offseason. The power play has converted in important situations this year, giving the team a needed spark after slow starts.

The penalty killing by players like Brian Boyle and Ryan Callahan is relied upon for eating up important power play minutes for opposing teams and blocking shots from reaching the Lightning net. When they kill off a penalty, it helps add some juice to the Lightning bench.

The two biggest weaknesses of this Lightning team have been their inconsistency in games and from game-to-game and the injuries the team has sustained through 23 games.

The Lightning have played just two “stinkers” in the words of head coach Jon Cooper — the first being a 6-1 drumming by the New York Rangers on Oct. 30 and the other, a 5-3 loss to the Columbus Blue Jackets on Nov. 25.

These were games where the Lightning were outplayed and deserving of a loss. In the other 21 games, Cooper likes what he sees for the most part and when you listen to him talk, you hear the calmness and quiet confidence of a coach who knows his players and believes in the process.

However, the Lightning’s inconsistency within games has been an issue at times. Cooper called it the team’s Achilles heel after the Lightning beat the Philadelphia Flyers 4-2 on Nov. 23, after a lapse in the second period where they were outplayed by the Flyers.

Putting together a complete 60-minute game has been a challenge for this team in the early going, losing them some games because of sluggish starts or short-term mental lapses, but not something that can’t be improved upon as the team continues through the season.

Part of the inconsistency may be attributable to being a team that is pretty banged up at this point and not playing with a complete lineup — something out of the team’s hands and part of life in the NHL. Oftentimes, it comes down to simply having bad luck. That’s certainly been the case as the team started the season without Callahan and suffered injuries to Boyle, J.T. Brown, Drouin, Stralman and Stamkos early into the season. 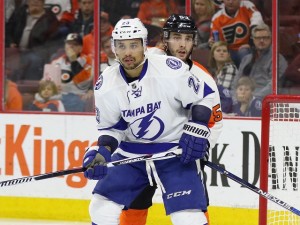 The Lightning are traveling with Stralman and he may make his return during the current road trip. With the announcement that Erik Condra was re-assigned to the Syracuse Crunch on Monday, this opens up speculation that one of or both, Brown and Stralman are ready to return to action.

The absence of Stralman has been felt a bit the last eight games, as the team has missed one of their most valuable players. Stralman is regularly the blueliner helping to lead the Lightning out of their own end with smooth breakout passes that help kickstart the movement into the neutral zone. The Lightning have struggled with that, particularly against the Blue Jackets and Bruins in their past two games.

The Lightning will play four games in the next six days — with only a Dec. 3 matchup with the Washington Capitals at home. The team faces the Blue Jackets on Tuesday and the St. Louis Blues on Thursday, before playing the Capitals and Carolina Hurricanes in back-to-back games. It’s the condensed schedule that teams are facing across the league this season.

Each of those teams has a winning record at this point in the season and the Lightning will be facing off against the Blues, Capitals and Hurricanes for the first time in 2016-17. It’s another demanding stretch of games for a team that is already battling injuries to important players early on.

While the Lightning aren’t off to the galloping lead in the standings that some people may envisioned as they read many of the season previews written about the club, it’s important to keep things in perspective.

The NHL regular season is an 82-game marathon, not a sprint. There are things going well for the team and areas where they need to improve, but now is not the time to panic.

The Lightning are weathering the storm.