When the Tampa Bay Lightning selected Mathieu Joseph in the fourth round of the 2015 NHL draft, there was little hype behind the pick. In his draft year, Joseph posted 21 goals and 42 points in the QMJHL, which was enough to draw the attention of the Lightning but were far from mind-boggling scoring numbers. During the next two seasons, though, he exploded onto the scene, scoring more than 30 goals and 70 points with the Saint John Sea Dogs while also representing Canada in the 2017 World Junior Championship.

This impressive play led the Lightning to give Joseph a three-year entry-level contract during his final year in the QMJHL. Before playing his first professional game, though, he helped the Sea Dogs capture the President’s Cup, before wrapping up his QMJHL career after a semifinals loss in the 2017 Memorial Cup.

Just a few months later, Joseph made his professional hockey debut with the Lightning’s AHL affiliate, the Syracuse Crunch. At any given point in the season, the Crunch had as many as 10 rookies starting, many of whom were selected in the 2015 draft alongside Joseph.

Despite a slow start to the year, the young Crunch team eventually found success on the ice. In particular, Joseph stood out for his strong two-way game and ability to make the right decisions with the puck to lead to a goal. In 70 games, he scored 15 goals and led the team with 53 points, both unexpectedly high numbers for the fourth-round pick.

After a slow start to his professional career, Joseph would go on to lead the Syracuse Crunch by scoring 53 points in the 2017-18 season. (Reinhold Matay-USA TODAY Sports)

Joseph would continue this regular season success into the playoffs, where he scored three goals and seven points in seven games before the Crunch were swept out of the playoffs in the semifinals by the eventual Calder Cup Champions, the Toronto Marlies. Despite this disappointing end to their playoff run, Joseph put himself firmly onto the Lightning’s radar with his ability to take on both offensive and defensive zones at crucial times in the game.

Heading into the Lightning’s 2018 training camp, there seemed to be little space available for a new player to break into the opening night roster. With the team largely unchanged from the one that made it all the way to Game 7 of the 2018 Eastern Conference Final, it was expected that the majority of the players would retain their spots in the line-up when the regular season started.

This, however, didn’t stop Joseph from fighting his way onto the Lightning’s opening night roster. In five pre-season starts, he scored a team-high five points while making himself noticed on every shift. 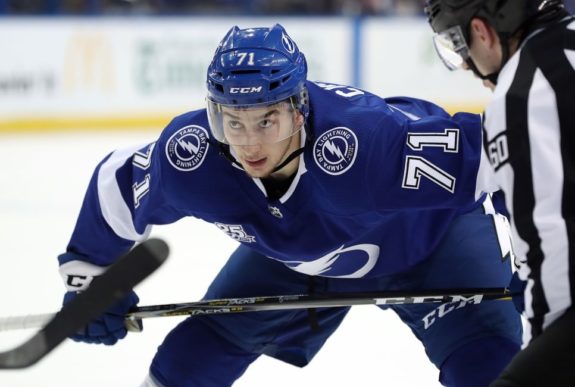 Fellow rookie Anthony Cirelli found success alongside Joseph in the AHL, and they continue this trend by playing together on the Lightning’s third-line and on the penalty kill. (Kim Klement-USA TODAY Sports)

Quickly, he went from an outside chance to make the roster at the start of pre-season to a guaranteed lock by the end. His speed and defensive acumen fit perfectly on the Lightning’s third line and penalty killing unit, alongside fellow 2015 draftee Anthony Cirelli. By the time that they took on the Florida Panthers on opening night, Joseph was all set to make his NHL debut.

Joseph Still Has Much to Prove to the Lightning

In his first 10 games as an NHL starter, Joseph made himself known to the hockey world as a defensive specialist. By utilizing his incredible speed, he scored his first NHL point off a perfect pass to Steven Stamkos on a penalty kill against the Carolina Hurricanes. 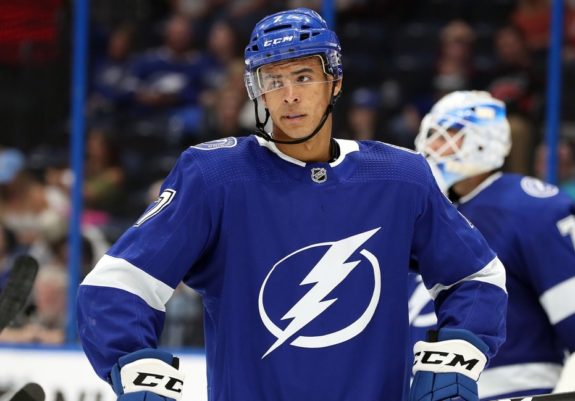 Even if he unable to score for the Lightning in a meaningful way this season, Joseph will continue earning ice-time with the team based on his strong defensive play alone. (Kim Klement-USA TODAY Sports)

Besides this one assist, though, Joseph has been unable to break onto the scoresheet. This doesn’t mean that he is playing poorly, however. In the 10 to 12 minutes of ice time he is given each night, he has largely looked impressive, lacking the jitters one would expect out of a rookie. Even if he has been unable to score his first goal, he has been incredibly close on multiple occasions and is primed to start scoring in a meaningful way for the team.

The good news for both the Lightning and Joseph is that he isn’t expected to be an offensive juggernaut this season. As long as he can continue to play a smart, defensive focused role, he will continue earning playing time each night. If his first 10 games are any indication, there’s no reason to believe that this former fourth-round draft pick will be sent back to the Crunch anytime soon.