The mystery that is new Pittsburgh Penguins Head Coach Mike Johnston is about to be revealed. While he has spent much of the summer getting to know the city of Pittsburgh and the players he will be coaching, he has been avoiding revealing too much about the systems he will employ this season.

The first priority for Mike Johnston in training camp is to begin the process of educating the Pittsburgh Penguins players as to how they are expected to play. While a great deal is known about Mike Johnston’s offensive philosophy based on his Coach’s Corner blog when he was with the Portland Winterhawks. Very little appears known about his defensive system other than his belief that a good offense starts deep in the defensive zone.

Looking into the past for insight

Back in 2010 Mike Johnston co-authored a book with Ryan Walter titled Hockey Plays and Strategies. Granted this was four years ago and might not be exactly what Mike Johnston has in store for the Penguins, however it does give some insight into how Johnston thinks defensively. Here is a description of the book.

Based on this it is easily inferred that the Pittsburgh Penguins will not become a “trap” team of any sort under the guidance of Mike Johnston, which is great news for everyone.

I will walk you through some of the key points in the book surrounding defensive zone coverage and give you my interpretation on how things may apply to the Penguins this coming season.

The key to this principle is that only one defensive player will be leaving the “inside” of the defensive zone to pressure the puck carrier along the boards. This leaves an ample amount of defenders in the high percentage scoring areas in the event that the offensive player tries to move the puck to his line mates in those areas.

They key is that puck pressure in the defensive zone becomes a one on one battle. This means you need defenders that are solid skaters and able to handle the puck if and when they are able to force a change in possession during their one on one battle.

Both Kris Letang and Paul Martin will be relied heavily on to win these battles and get the play moving out of the Penguins zone. Both players led the Penguins in success rate of zone exits as tracked by Corey Sznajder. Letang had a 33.2% success ratio while Martin was successful 27.4% of the time. The next best defender still on the roster was Simon Despres at 25.4% efficiency.

Outside of these players the Penguins have a largely unproven defense core. While Olli Maatta has been praised for his level of play during his rookie season he was better than only Brooks Orpik and Rob Scuderi at 21.1% successful zone exits. He also had a highest turnover rate at 9.3% which is not surprising for a young defender in the NHL. Penguins Head Coach Mike Johnston will be looking for progression from Olli Maatta and better puck management.

With Letang, Martin and hopefully improvement from Maatta the Penguins have one player for each pairing that should be able to be relied upon to be efficient with the puck once they have forced a change in possession in their one on one battle.

The impact of losing long time Penguin Brooks Orpik should be minimal based on his 18.5% success rate on zone exits. The only current Penguin that concerns me when it comes to this one on one style of defense along the board is Rob Scuderi. He was the worst Pittsburgh defender last season as he was successful on only 12.4% of his zone exits. He was also just behind Olli Maatta, and NHL rookie as compared to the veteran Scuderi, with a turnover rate of 9.1% on his zone exit attempts.

Perhaps pairing him at five on five with one of Paul Martin or Kris Letang may be a way to mitigate the negative effect his skill set could have on this style of defense.

Defensive coverage principle – Stay between the puck and the net 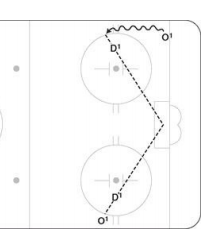 This leads directly into being ready to block shots and coincides with keeping your stick on the ice in the defensive zone. By staying in a direct line between the opponent and the net you put yourself in a great position to block a shot. As well, if your stick is on the ice you cover more space and have the greater potential to intercept an opposition player trying to force a pass to the high percentage scoring areas.

This is a very common mistake that I saw all through my years in minor hockey right up until today. In front of the net defenders need to be between the offensive player and their goaltender to maintain good defensive body position. However when a rebound comes to the front of the net the defender often tries to “knock that forward on his butt”.

Think about it, this is the NHL, offensive players are more than skilled enough to score from their butt. The key is and always should be to tie up the stick first. At the very least if you have their stick they cannot shoot the puck and they cannot hit your goaltender. That’s a winning situation in my book.

Once you have their stick you can then look for the rebound and get to it first or simply let your goalie freeze the puck. This seems like a very simple concept but it is amazing when you watch hockey just how often the “macho big hit” is put ahead of getting the stick tied up. 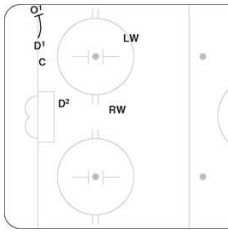 To the right shows the zones all three of the low players work in the defensive zone. This helps to 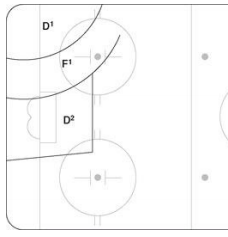 spread out the defensive players and keep all the attacking players out of the high percentage scoring areas.

The defender in the corner only has to think about taking his man and creating a turnover in possession. The forward placed between them and the net needs to be the second line of defense if the defender loses his battle on the boards and needs to cover the closest offensive player that may receive a pass.

The defender in front of the net should never leave that area even if the first defender and then the forward are both beaten. The goalie now has a one on one battle with the shooter at a poor angle. The defender in front of the net should not leave that area and focus on taking away the pass to the high percentage scoring area in the slot. The forward on the weak side will drop into the lower slot area in the event of a breakdown described to support. 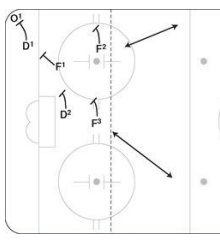 This system is very similar to the Three-Two coverage system. The key difference is in the two wingers, they both drop below the faceoff dots. This is usually employed when the puck goes behind the goal line. Unlike the last system the weak side defender can now move over to help support the strong side defender and forward and the weak side winger drops down to cover the front of the net.

The key issue I can see is that a good passer on the attacking team can find a seam to the weak side defenseman who could have plenty of room to walk into the high percentage scoring areas before the defending team adjusts. 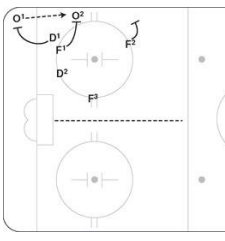 This system is best utilized on teams that like to cycle the puck along the boards and then move towards the front of the net when there is an opening. The set-up is very similar to the last coverage however both of the defenders and forward pressures the puck along the wall. This creates little room for the attacking team to create plays to get to the net.

As this system leaves a back door play wide open for the opposition it should not be utilized against great passing players and a defender with a strong point shot. If the attacking player along the wall can find a lane to pass to his defender it leaves a two on one situation for the single forward protecting the slot. 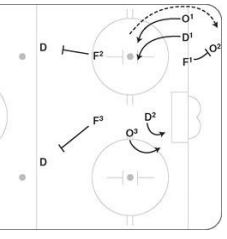 The key to this system is taking away time and space from your opponents. In order to be effective a team must have good skating defenders. In general, aside from Scuderi, the Penguins defense core is made up of relatively good skaters.

The downfall of this system comes against teams with elite skaters and a great deal of movement in this offensive zone system. The defending team is tired out fairly quickly as they are skating with the elite skaters throughout the zone in a man to man coverage scheme.

Penguins are in good hands

After reviewing these schemes they appear well thought out with an emphasis on puck possession as opposed to physically beating down your opponent. A great deal of the strategy is working to create turnovers that can quickly lead to a breakout and offensive chance.

Granted none of these coverages or concepts is revolutionary, however I believe Mike Johnston will be a far more than adequate NHL head coach. It would not surprise me to see the Penguins start slow out of the gate with a new coach for the first time in five years.

However by December I would expect that Pittsburgh will have adjusted to the new way of doing things and will be flying high once again.