In the NHL, the role of a team captain is to display traits which represent the direction of his team and the character of his fellow teammates. The captain is undoubtedly looked upon as the leader of a given team, responsible for leading by example both on and off the ice.

This means that on the ice, a captain should be amongst the best players, not only on his team, but also within the league itself. His play should illustrate the hard work and determination which contributed to being appointed to the role itself. Along with his strong individual play, the captain must be able to stand up for his teammates when needed, rally the team in tough times, and display confidence by emphasizing team strategy and strong communication with management and game officials in order to provide his team the best opportunity to win.

Off of the ice, the team captain must be the definitive leader of the hockey team. Providing insight and encouragement to younger players is a must, as the lessons commonly taught by team captains tend to impact the career path of young players. Further to this extended leadership role, the captain must have a strong off ice presence is one’s community, further displaying the integrity and identity of his team through charity and other social events throughout his home city.

It is these on and off ice qualities which make a great NHL captain. Throughout history we have seen many great captains, such as Steve Yzerman and Nicklas Lidstrom with the Detroit Red Wings, Joe Sakic with the Colorado Avalanche, and Ray Bourque with Boston Bruins among many others.

Yet putting these qualities together is extremely difficult, and not all players make successful captains, as seen most recently with Joe Thornton and the San Jose Sharks and Vincent Lecavalier with the Tampa Bay Lightning in 2001.

The following three current NHL captains are players which I believe are largely inadequate in meeting the criteria of a strong NHL captain: 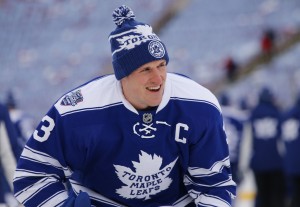 Dion Phaneuf has become a lightning rod for criticism over the past few seasons in Toronto. While some defend the choice of Phaneuf as team captain, the vast majority oppose his captaincy, and for good reason.

Since being named captain prior to the 2010-11 season, Phaneuf’s offensive production has been steadily decreasing. Following back to back 17 goals season in Calgary, Dion has netted over 10 goals just once in the past four seasons, with 12 in 2011-12. Averaging around 30 points per season over his past three seasons, Phaneuf finished in a 45th place tie in defenseman scoring last season, less than relatively less notable defenseman in Roman Josi and Marek Zidlicky.

Other than an obvious decrease offensively, Phaneuf’s defensive play has also regressed. Although it is known that Phaneuf’s quality of competition on a game by game basis is amongst the highest in the league, Dion’s Corsi% has continued to decrease over the past two seasons. Corsi is essentially measured by the shots for versus against differential while a given player is on the ice. As a result, a lower number represents that a player is on the ice for a greater number of chances against than he creates. Further to this, Dion has struggled to a minus rating in four of his last five seasons, while any Toronto Maple Leafs fan would agree that Dion looks extremely vulnerable in his own end. 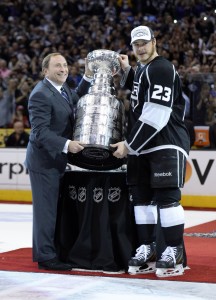 Dustin Brown was named the captain of the Los Angeles Kings in 2008. However, Brown does not resemble the typical NHL captain, especially so because he is a captain leading a veteran laden team.

I know what you’re thinking. How can Dustin Brown, the captain of a team who won the Stanley Cup two of the past three seasons, be an NHL captain undeserving of his role? Here’s why: Brown’s on ice production has ground to a halt over the past two seasons. After scoring 33 goals in 2007-08, Dustin’s production has become stagnant and basically disappeared. Last season, Brown posted 27 points. 27 points for an NHL captain! This put Brown in a tie for 268th in NHL scoring. Due to this, Brown was often demoted to the third and fourth lines last season, as well as during the playoffs, having little positive impact on his team’s success late in the season.

On top of this, the Los Angeles Kings currently boast a bevy of veteran players with not only more NHL experience and leadership, but also offensive production, most notably Justin Williams, whose leadership both on and off the ice make him one of many excellent candidates for the captaincy.

Simply put, Brown’s production does not represent the high quality production expected of an NHL captain. As we’ve discussed, a captain should be amongst the best players on his team as well as in the league. Brown simply does not fit this description, as little offensive production and being demoted for lack of production typically aren’t the best ways to lead your team on the ice.

You’ll get no argument from me here. Dustin Brown is a great leader, albeit off the ice. Brown won the Mark Messier leader of the year award this past season, awarded to a player who shows great leadership within the sport and more importantly, within society. Dustin is known for his social work, making him a great leader off of the ice.

Yet similar to Phaneuf, Brown’s inability to lead by example on the ice in being a productive player for his team is what leads to Dustin undeserving of his captaincy role. Winning the leadership award is an honor, don’t get me wrong; but many NHL players make significant contributions in society and are off ice leaders, however as an NHL captain, Dustin Brown must match his off success with his on ice efforts if he is to one day be considered a great NHL captain.

This should really come as no surprise. Since being awarded the “C” of the Washington Capitals in 2010, Alexander Ovechkin has become widely known as the NHL captain most undeserving of his role.

Alexander Ovechkin is a fantastic hockey player, there is no question; yet the “Great 8” has become an increasingly one dimensional player since becoming team captain. Although Ovechkin scored 51 goals last year, which led the league, Alex has become known for his extremely poor play defensively.

The season prior to being named team captain, Ovechkin registered a +45 rating, while in the following five seasons has only managed a plus rating 3 of 5 seasons, while posting a -35 plus/minus rating this past season, third worst in the NHL! Alex’s play simply has not represented that of a worthy NHL captain, as other than scoring goals, Ovechkin has been a poor on ice leader, becoming well known for his extremely poor back checking and defensive positioning, as seen in the following, hilarious video:

In terms of his on ice production, Alex has struggled offensively in comparison to his standards. His goal scoring totals have remained pretty stable, yet his point totals have come no-where near where they were prior to his captaincy. Gone are the 100 point seasons, as it has now been five NHL seasons since Ovechkin eclipsed the century mark, once again showing that his game has become strictly about scoring goals rather than distributing the puck, having become a largely selfish player.

The type of player Ovechkin has become is one which does not reflect the ideal NHL captain, as Alex tends to put himself before his teammates and even his coaches, a trend which has become increasingly stronger in recent years.

Off of the ice, Ovechkin has become the face of the franchise for his on ice goal scoring abilities, rather than for his social work and ability to lead his teammates. As we’ve talked about, an NHL captain must be as strong off the ice as he is on it, supporting players through non hockey related matters, being a public figure and supporting the direction and leadership of his coaches and management.

Yet Ovechkin is not a strong off ice leader. It is rare for Ovechkin to make significant contributions in the Washington area, spending the majority of his time away from the rink at home in Russia, particularly during the offseason, contributing little to his local community. Further, Ovechkin is known for his inability and unwillingness to interact with coaching and management, often going against their coaching decisions which have led to the recent hiring of Barry Trotz, the fifth coach of Ovechkin’s career.

“If Ovi is willing to listen, he’s going to have a chance to do some great team things”  – Barry Trotz

Simply put, Alexander Ovechkin is an NHL captain who plays as an individual. Despite his goal scoring prowess, Ovechkin has nothing to show for his career other than, you guessed it, individual awards. Sure Ovechkin is a talented player, but both his on and off ice conduct are that of an individual player, rather than the leader of a team of players. Until Alex decides he wants to lead his team, both on and off the ice through his play and societal contributions, he will remain as the NHL player most undeserving of his role as team captain.

48 thoughts on “The Top 3 Most Undeserving NHL Captains”