When Vancouver Canucks defenseman Dan Hamhuis scored into an empty net to seal a 5-3 victory over the hapless Toronto Maple Leafs last night, Leaf winger Kris Versteeg chased the sliding puck in vain and smashed his stick over the crossbar as it entered his own net. Who says the Leafs can’t hit the net?

Ha ha. The Leafs have become a national joke. It’s obvious from the unprecedented number of fan comments on major sports sites that hockey fans are reveling in the Leafs’ misery with no mercy. If you take the time to read them all, you can witness a kind of schadenfreude that is developing with NHL hockey fans everywhere. They’re taking a lot of pleasure in the misfortunes of this pathetic team. This time, even the most die-hard, blue-and-white blooded, Leaf-forever fans are having a hard time defending. 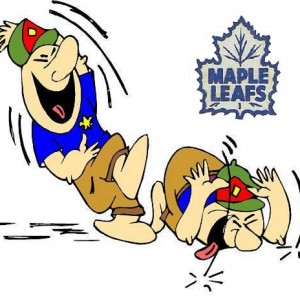 The rainbow at the end of the storm is a very long way off. With his questionable player transactions so far, third year Leafs General Manager Brian Burke has sucked the hope out of even the most avid Leaf fans. The losing streak is at eight and good hockey fans can easily see, this team is going nowhere but to the bottom of the standings once again.

I live in the Greater Toronto Area. I have a life-long love of hockey and I’ve watched every Leaf game so far this year.  I’ve also made good lunch money playing Pro-line and betting against the Leafs. It’s never been easier.

More than one fan response after successive Leaf losses this past week have called this version of the Toronto Maple Leafs the worst of all time. It’s difficult to compare, given the relatively new concept of the three-point game and how much the game itself has changed over the past couple of decades. One thing hasn’t changed in the franchise’s 94-year history. What brings fans out of their seats clapping and cheering is goal scoring. This season’s outfit may very well be the most difficult team to cheer for in nearly a century. Even when the Maple Leafs finished the 1984-85 season last overall in the league at the height of the franchise’s gloomiest years, they still managed to score an average of 3.16 goals per game.  So far this year, they are only averaging 2.19 G/G for 28th best in the league. It’s worse than disastrous, it’s comedic, especially given last season’s dreadful 29th place finish.

Out of utter desperation, the Leafs called up their brightest prospect Nazem Kadri from the AHL for last night’s game, despite valid arguments that this kid is nowhere near NHL-ready. He wasn’t exactly tearing it up in the minors. The news came out today that Kadri has been suspended for his next two AHL games for mouthing-off at a referee. New Leaf joke; he may be the first ever player to be demoted and suspended in the same day.

We can’t help it. Laughing at the Leafs has become a national pastime, especially given that the TML continue to be the most profitable team in the NHL. Some lesson to teach your kids, eh? You can be most successful by forever being lousy at what you do. 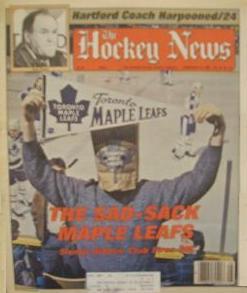 The saddest part this time is the fact that most Leaf fans were truly on side a couple of years ago with a long and patient re-build through wise drafting and player development. By way of his large ego and impatience, Brian Burke has once again tossed away the future by going for it all right now, a futile Leafs tradition. So far, the results have been tragic. It will still take a couple of years before we see the full impact of the Phil Kessel deal. Right now though, with two high first round draft choices in the bank, the Bruins and their fans are set for the future and joining everyone else in laughing at the Leafs. Let’s face it, really good players make their teams better by themselves. Phil Kessel has been anything but a franchise savior in Toronto. He’s very good, but the team appears to be worse with him. He’s just not a franchise-type player to build around.

So bring on the Leaf jokes. Hey, did you know the Leafs were in last night’s game almost right to the end because Canucks’ coaches called for an optional skate? Yuck yuck.  The Leafs have trouble winning on days that end with the letter “y”. (hee hee) Maybe the current losing streak will extend to 44 games, a fitting symbol to a franchise that hasn’t been to a Stanley Cup final since The Mamas and The Papas were still in diapers. “And with this year’s second round draft choice, the Toronto Maple Leafs are proud to select… a new General Manager!”  Ahh, the laughter that unites us all.

3 thoughts on “The Worst Maple Leafs Team Ever?”