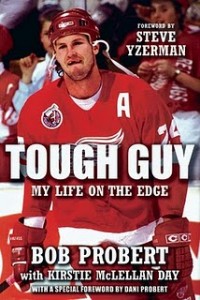 Bob Probert was arguably the best enforcer in the History of the NHL. He finished fifth all time with 3,300 penalty minutes and was in 238 fights in his career. Not only was he a fearsome fighter, he could play. In 935 career regular season games Probert scored 163 goals, 221 assists for 384 points. But of all the fights Probert fought in his life, the toughest one was with addiction.

Tough Guy is a page turning journey of the life story of legendary NHL enforcer Bob Probert. As a hockey fan reading this book, I was intrigued to read about what life in the NHL was like. Many hockey fans dreamed of playing in the NHL when we were kids. I am no different and so I decided to read Tough Guy and see what it was like from an enforcer’s point of view. The book does not disappoint in that regard as there is many references to hall of fame players who were friends and teammates of Bob’s such as Doug Gilmour, Paul Coffey and a forward by Steve Yzerman.

I quickly began to realize that the fact that Probert made hockey his career that was of secondary focus for the story. His autobiographical tale recounts his lifelong battle with alcoholism and substance abuse. At times the emotional range of this book caught me off guard. I found it very difficult to read about his final day on his boat with his family. I tried to read that chapter a loud  but at times was unable to say the words. Other times I found myself laughing out loud at some of the antics that you would expect.

Bob Probert died on July 5th 2010 of heart failure while boating with his family near his home in Windsor Ontario. He left behind his wife Dani Probert and their four children. He was forty-five years old. He began writing his book with co-author Kristie McLellan Day to tell the raw truth about his life. As his kids grew older they began to hear a lot of stories about their Dad. Not all of them were true so Probert wanted to write a book to set the record straight. To tell his story the way he wanted it told.

The story follows his life from the age of eight when his father dies. His experiences with alcohol begin early in life and become a problem before he began to play midget AAA. The accounts of his many encounters with drinking, drugs and the law throughout the book give insight to the life of an addict. From crashing his car and later on a motorcycle while driving drunk, to being arrested while crossing the border with cocaine to being arrested and zapped with a stun gun three times while buying drugs, all while he was staying in a Florida rehabs center –  recount many of the poor decisions typically made by addicts.

It is sad to read about a person who has exceptional talent and ability and physical strength, a person who thrives on competition and challenge, a person who has all the tools to be incredibly successful and yet is incapable saving themselves from themselves. As I read Tough guy it made me remember similarly conflicted players such as Bryan Fogarty, and John Kordic. This past summer the tragic deaths of other NHL enforces Wade Belak, Rick Rypin, and Derek Boogaard also crossed my mind begging the question if there is a connection.

All pro-sports have their demons. The MLB suffers from steroid abuse, the NBA struggles with drug abuse as does the NFL. The NHL is no different. The lifestyle of a professional athlete begins at a very young age. These young men are faced with the challenge of incredible success at such an early stage of life. I can only imagine how horribly I would have managed such wealth and fame at such a young age. The fast living lifestyle of wealth, travel, riches, women and drugs would be overwhelming.

Reflecting on how life unfolded for Bob Probert I can’t help but wonder if I would have made my decisions any different than he did. Perhaps some people are more subjective to addictive tendencies than others. I don’t know.

From reading Tough Guy, I know that Bob Probert lived life fast and large. While I am sure he had regrets (don’t we all) I bet he would do it all over pretty much the same.