We’ve established that the 2013-14 season was downright awful for the Washington Capitals, culminating with a failure to make the playoffs. The team’s shortcomings have been discussed in great detail–poor coaching choices, awful defense, weak 5v5 play–but what about its upsides? Specifically, who are the Capitals’ Three Stars of the regular season? I named Alex Ovechkin First Star, but who’s next in line? 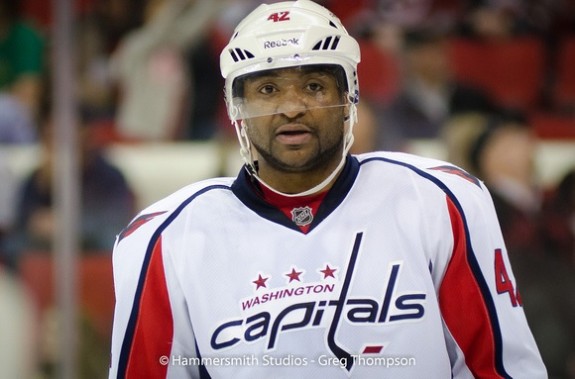 Naming Joel Ward one of the Capitals’ Three Stars may seem like a natural decision due to his high offensive production. Having posted 24 goals and 25 assists, Ward had a career year and was a standout for the Capitals. Among all Capitals, only Ovechkin and Nicklas Backstrom had higher point totals (tied at 77 points) than Ward (49 points). The depth and breadth of Ward’s contributions can’t be portrayed by simple statistics alone, so let’s begin by examining his linemates and their collective impact on the team.

Ward’s most frequent linemates were Jason Chimera and Eric Fehr. The trio comprised Washington’s third line, which was arguably its most effective . From strong backchecking to relentless dump-and-chase to delivering even-strength goals when they were needed, Ward’s line was invaluable – and Ward himself was central to its success.

Since I emphasized Corsi in my previous post, I’ll keep things consistent and do the same here. Ward’s Corsi-for percentage was 47.2%, down from 2013’s 50.2%. Ward has never been a huge driver of possession, but he definitely accounted for this drop by increasing his offensive totals. Remember, too, that many of Ward’s zone starts came in the defensive zone, which is bound to impact his Corsi. The fact that Ward had so many own-zone starts indicates that he was one of the team’s most effective defensive forwards. This is especially significant considering the amount of blame that’s been shoved on the Capitals’ blueliners. Forwards must play solid defense, too.

While the Capitals’ quality of play declined in their zone, Ward was an exception to this rule. Ward also played a pivotal role in preventing significant scoring droughts. In a year when the Capitals relied heavily on Ovechkin’s power-play wizardry, consistent even-strength production was difficult to come by. Ward provided this and spent additional time on the Capitals’ highly-ranked power play, often filling in for Ovechkin on the second unit. He also saw significant penalty-kill minutes, making him one of the team’s most valuable, versatile forwards.

Of all teams, the Capitals spent the most time on the power play (450:44.) Ward was on the ice 31.9% of that time and notched 10 power-play points (6 goals, 4 assists.) When the Capitals were on the penalty kill, Ward was on the ice 31.8% of the time. He certainly did his part to help earn the man advantage by drawing 17 penalties (sixth-best on the team.) Ward also finished the season with 16 secondary assists, good for second among all Capitals and bested only by Backstrom. His 67 blocked shots led all Caps forwards, and his total time on ice ranked eighth among all Caps players.

Consistent is perhaps the best word to describe Ward’s 2013-14 campaign, and consistency was a quality the Capitals sorely lacked. Nearly every Capital experienced success in making plays, lighting the lamp, and playing sound defense (at one point or another), but Ward’s consistency in all categories was unmatched.

With that being said, it’s only fair that linemate Chimera receive an honorable mention – his presence was crucial to Ward’s excellent play. When looking up many of the aforementioned stats, Chimera frequently put up similar numbers and was ranked closely to Ward. They were a great match, as Ward helped Chimera rebound from a poor 2013 season and Chimera contributed to Ward’s career year. Fortunately, the two didn’t spend much time apart. While Ward wasn’t subjected to erratic linemate changes, he excelled alongside Chimera with both Mikhail Grabovski and Fehr as centers.

In short, Ward was good – and consistently good, for all 82 games of the regular season. Was this year an anomaly in terms of production? Possibly, but the focus here is on this past season’s results, not what lies ahead. All in all, the variety and quality of Ward’s contributions were unmatched, which makes him a shoo-in for the Capitals’ Second Star.