As the trade deadline approaches, there have been numerous rumors floating around regarding which defenseman the Detroit Red Wings should target. Our friends over at Winging It At Motown have weighed the pros and cons regarding trading for various defensemen such as Marek Zidlicky, Keith Yandle, Cody Franson, and Tyler Myers. Pierre LeBrun over at ESPN discussed how the Red Wings might be interested in dealing for Toronto Maple Leafs captain Dion Phaneuf. However, I think we all have it wrong. While the Wings defense corps is not the strongest it’s ever been, they have been serviceable this season. The offense on the other hand has been a puzzling problem. How do the Wings fix it?

The Wings’ Problem On Offense

If you take a quick glance at the NHL team stats page, you might not notice a problem. Prior to their game against Montreal, the Wings ranked 9th in the NHL with 2.87 goals per game. Their powerplay is tops in the league at 26.0%, more than 2% better than the next best team. Even if you look at 5v5 Corsi For%, you’ll find the Wings are 4th best at 53.9%. Where’s the problem you might ask. Well, scroll over to the 5v5 goals per 60 minutes column and you’ll find that the Wings rank 25th in the NHL at 2.0 goals per 60 minutes.

There are a few things Mike Babcock can do to try and jumpstart the Wings at 5v5. This year, Babcock has been somewhat reluctant to juggle his lines. As of late, Babcock has been rolling with the following four lines:

While there has been some real chemistry with Tatar and Datsyuk, these line combinations are not the best that the Wings can field when thinking about puck possession. For example, we’ve all talked about the chemistry that Henrik Zetterberg and Gustav Nyquist have, but when you look at their numbers, you see that they aren’t the most effective tandem.

The fact is that right now, the Red Wings are not utilizing their best puck possession lineups. I’d like to advocate for the following line combinations based on their 5v5 ZS-adjusted Corsi For%. 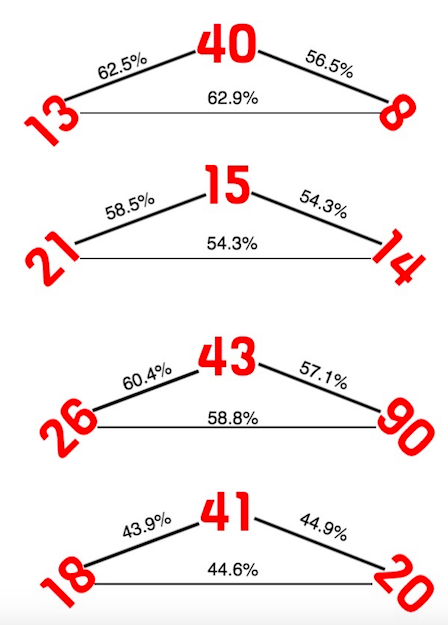 From this chart you can see the 5v5 ZS-adjusted Corsi For% for each combination of players on the line. On the first line, you have Henrik Zetterberg, Pavel Datsyuk, and Justin Abdelkader. Zetterberg and Datsyuk have a 5v5 ZS-adjusted CF% of 62.5%, Zetterberg and Abdelkader are at 56.5%, and Datsyuk and Abdelkader are at 62.9%. Using these line combinations, you see that the Red Wings boast an extremely strong top-3 lines with the lowest puck possession combinations coming from Nyquist-Tatar and Nyquist-Sheahan. However, of all the forwards who have played at least 100 minutes at 5v5 with Nyquist, the combinations with Tatar and Sheahan are his highest CF%.

I don’t know the Red Wings better than Babcock. That’s a given. The man is the best coach in the NHL and clearly has a great feel for his team. However, when you’re sitting at 23rd in the NHL in 5v5 goals/game, it might be time to shake up the lines drastically. The Zetterberg-Datsyuk-Abdelkader line is a proven commodity. The “Kid Line” showed last year that they can dominate the puck. Finally, it’s time that Jurco, whose puck possession skills I’ve discussed in length, deserves the opportunity to play with better teammates in Darren Helm and Stephen Weiss. The way I would spread the ice time would be as follows:

These are rough estimates that will be dictated by how the game is played, but if the Wings follow this, you’re looking at having the puck at better than 55% of the time for more than 52 minutes again. That will eventually translate into a better goal output.

If the Wings elect to trade for offense, a plan that I am not a huge advocate for considering the stable of prospects at hand, there are several options. My colleague, Tom Mitsos, discussed a possible scenario where the Wings deal for Toronto’s Phil Kessel. I personally think there are a few options that are better suited for Detroit, with one option in particular being very intriguing.

I’m going to preface this by saying that I am not a general manager, I will never be a general manager, and I, in no way, shape, or form believe that I have the skills to be a general manager. This trade speculation is the last you’ll hear out of me in an article. If the Wings do decide to go after offense at the trade deadline, the guy I think they should go for is…Colorado’s Jarome Iginla.

Before you throw your arms up in the air and complain that he’s 36 years old and on the downswing of his career, hear me out. Iginla can most likely be had at a cheaper price, due to the fact that he’s in a different conference and is a veteran looking to solidify his career with a Stanley Cup championship. He comes at a reasonable cap hit for the next two seasons at $5.3 million through 2016-2017. This season, Iginla has 18 goals and 40 points in 57 games, leading the Colorado Avalanche in scoring this season. Yes, he has more points than Matt Duchene, Gabriel Landeskog, and Nathan MacKinnon. His 18 goals would be 2nd on Detroit, and his 40 points would rank 4th. OH, AND HE’S A RIGHT-HANDED SHOT. What if the Wings utilized Iginla on the point on the powerplay, similar to Daniel Alfredsson last season?

As for the price for Iginla, I’d imagine that Colorado would be looking for at least a pick and a roster player. I talked this over with a couple of guys who cover Colorado and discussed this deal as a possible option:

Colorado gets another pick to add to their rebuild process while adding a great roster player in Darren Helm who can bring depth scoring to that team. The Wings unload Jakub Kindl to a team that can actually use him, thereby solving that problem. I understand that some of you may point out that Detroit is already without a 3rd round draft pick for this upcoming draft, and by trading the 2nd round pick, the Wings are down to just five picks in the 2015 draft.

I’d argue that the Wings make this deal simply because there aren’t too many years of Datsyuk, Zetterberg, and Kronwall left. If I want to put this team over the top, I think sacrificing one pick and the speed of Darren Helm could do it. With Iginla’s contract expiring after 2016-2017, the Wings will have a roster spot open to add the likes of Anthony Mantha, Dylan Larkin, and Andreas Athanasiou if they haven’t already cracked the big club full-time.

Again, this is all speculation and we have no idea if this would put the Wings over the top. I’d much rather juggle the line combinations and hope that provides all the offense Detroit needs. If it does come down to the trade deadline, I think a deal for Iginla could be one that is affordable, cost-effective, and does not mortgage the future.

Data from Hockey Analysis and War-On-Ice