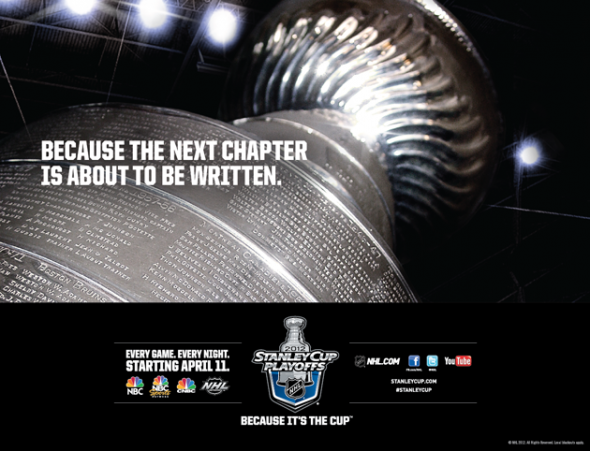 I recently began a subscription to the Sports Business Daily and Sports Business Journal. These are both great resources for relevant, timely sports business news. On the day I began reading, I came across an article about the National Hockey League’s proposed marketing campaign for the Stanley Cup Playoffs. (You may need a subscription to read this article, so for similar information, see Gary Wyshynki’s article on Yahoo! Sports, which is linked below). For the past two years, the NHL used the “History Will Be Made” campaign. This produced some great commercials centering on stars such as Steve Yzerman, Mark Messier, and Ray Bourque. The spots are seeped in history and make fans remember important Stanley Cup moments. But, therein lies the problem. The “History Will Be Made” campaign pulls at the heart strings of the real and knowledgeable NHL fans – the ones that not only remember players like Yzerman, Messier, and Bourque, but also know them. They know that Yzerman was the heart of Hockeytown, Messier was the charismatic Ranger who brought the Cup to New York, and Bourque was the ever-classy Bruin who finally won a championship with the Avalanche. If you don’t know the players, you probably did not care about the “History Will Be Made” campaign because it spoke to memories that you did not have or even care to have.

This year, the league is making a shift in focus. Now, the casual fan will be targeted with the “Because It’s The Cup” campaign. As Sports Business Daily and Gary Wyshynski describe, the new focus is the casual fan who will watch the games in a social setting. Watch the first spot in the campaign, which is provided in Wyshynski’s post on Yahoo! Sports. It feels so much different, doesn’t it? There are friends having a great time together whether it’s in their apartment or the local bar. The overarching message – watch the Stanley Cup Playoffs because it’s fun and your friends are doing it. Now, that’s speaking to a broader audience, which is what the NHL has been able to focus on over the last few years. After the lockout, it was important to get the die-hard fans back. Show them that hockey is back, healthy, and a place where fans should return to spend their money. With the expansion and success of outdoor hockey and this type of broad-based marketing effort, we see the NHL building their fan base past the die-hard fan. Gary Bettman proudly lets people know that revenues have grown each year since the lockout, and in fact, I’ve heard him say that first hand back in January. To continue that trend, the fan base needs to be larger, and “Because It’s The Cup” aims to do this. By incorporating MolsonCoors and DraftFCB, a major advertising agency, the NHL plans to show us that the Stanley Cup Playoffs are a social occasion to be enjoyed with cold beers and good friends. Promotion will even occur with more licensing of the Stanley Cup logo, as is evidenced by the Stanley Cup tap handles that will be seen in approximately 6,500 bars in North America. The NHL hopes to bring the casual fan into the playoffs to begin making new die-hard fans.

Right here in South Florida, we will have a real study about the power of the Cup to bring in the casual fans. It’s no secret that the Florida Panthers have struggled with attendance, but much of that struggle could be attributed to poor play on the ice. With the team leading the Southeast Division, attendance has been stronger than in years past, something that makes President and CEO Michael Yormark rightfully proud. With the Panthers likely to make the playoffs as the division winner or a seventh or eighth seed, we will see if the casual fan will become interested. A nice playoff run and excitement around the team will help the Panthers as they attempt to grow their own fan base and increase revenues associated with ticket sales and sponsorship. Will the Panthers pull new fans into the BankAtlantic Center? Will fans gather on Las Olas in Ft. Lauderdale and South Beach in Miami to cheer on Jose Theodore, Brian Campbell, and Kris Versteeg even if they can’t pick the players out of a crowd? The Florida Panthers and the NHL sure hope so because it’s the Cup!