The Columbus Blue Jackets are full of wonderful stories these days. Everywhere you look up and down their lineup, players at different points in their career are making a major impact. Collectively, they have jumped on the Washington Capitals by winning two straight from them at Capital One Arena. Game 3 and the momentum all shift to Nationwide Arena on Tuesday night.

Whether it’s Seth Jones playing over 30 minutes again as the anchor on the blue line, or Zach Werenski becoming just the 6th defenseman to ever score multiple playoff goals before his 21st birthday, stories with the Blue Jackets are plentiful.

Then there is Matt Calvert’s journey with the Blue Jackets.

Calvert is currently the elder statesman on the team. He made his debut way back on Jan 7, 2011 in Anaheim. He has seen the lowest of lows with the Blue Jackets in his time.

The Blue Jackets finished the 2010-11 season with a record of 34-35-13. Then they followed that up by finishing with the worst record in the NHL in 2011-12 at 29-46-7. From bad records to agonizing defeats, Calvert can share just how painful the lows were. Perhaps winning your finale in 2012-13 only to have Minnesota win their game ranks up there among the most agonizing.

Calvert has seen it all. Even when there were some good times in there such as making the playoffs in 2013-14, those ended up in pain and frustration.

Calvert has seen many players come and go. He’s seen coaches and general managers fired. Since 2010-11, the only constant on the Blue Jackets is Calvert.

And through it all, he’s been the same guy no matter who’s been around him. He’s a heart and soul player who knows his role and plays it well. The Blue Jackets know what they are going to get from Calvert. He’s not an offensive dynamo. He’s not someone who plays a glamorous role.

No, Calvert is someone who plays a gritty role with passion and energy. It’s infectious. Whether he’s killing a penalty and trying to score shorthanded on you or he’s using his speed to create plays, Calvert never does one lick of complaining. He truly embodies what it means to be a Columbus Blue Jacket. 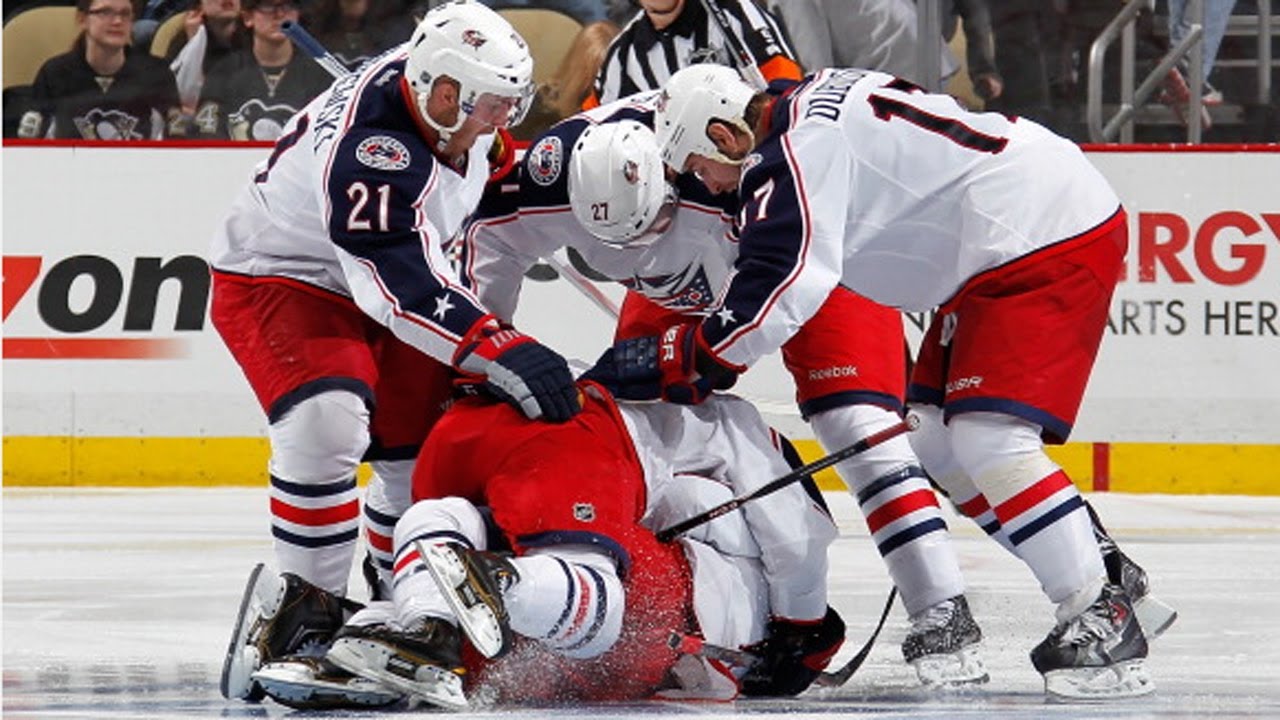 Three moments stand out above all the others in Calvert’s Blue Jackets’ career. Almost four years ago to the day, he scored the biggest goal in the history of the team at that time.

The Blue Jackets were down 1-0 in their series in 2014 to the Pittsburgh Penguins. They wanted to tie the series before heading back to Columbus. The game got to overtime. They had a chance. They needed a hero. Enter Calvert.

Thanks to a great play behind the net by Brandon Dubinsky, Calvert got the puck in front of Marc-Andre Fleury and banged home the winner in double overtime. That win marked the first ever playoff win for the Blue Jackets. The heart and soul of the team got the ultimate reward.

From Gashed to Game Winner

If you ever wanted to how just how tough Calvert was, look no further than the game in November 2016 against the New York Rangers. He took a puck in the face that required 36 stitches. With thoughts of all that lost blood or a possible concussion, there was no way he was coming back to that game.

That was until he came back to that game.

Calvert not only returned to the game with a head band on, he scored the game-winning goal. What a scene. After the game, pictures of him surfaced on social media showing the damage he took. It didn’t take the smile away from his face. Add warrior to his list of traits.

The Blue Jackets were on the verge of securing a 2-0 lead in their series with the Washington Capitals in regulation. But after one too many penalties against, T.J Oshie tied the game. The result wouldn’t be decided until overtime.

The Blue Jackets needed another hero. Could they find a way to regain momentum after eight power plays against and over 50 shots against? You better believe it. Look no further than to big game Calvert.

After Werenski made a great play to create a scoring chance, Calvert found himself in front with a golden opportunity. He was forced to make a play with just one hand on his stick. It ended up behind Braden Holtby for the game winner. After a review for offside, the goal stood and Calvert now had his second playoff overtime winner of his career. That is more than both Sidney Crosby and Alexander Ovechkin combined. Not bad for someone who isn’t known for his offense.

Calvert has seen it all. He’s seen the highest of highs and the lowest of lows. He’s been the brunt of fan’s frustration. He’s been cherished for his big moments. But through it all, he’s just Matt Calvert, a fun-loving player who is well respected in the Blue Jackets’ locker room. He’s plays every shift like it’s his last and leaves it all on the ice no matter what’s going on around him.

That is the Columbus Blue Jackets’ way. His effort, passion and energy know no bounds. He’s a monster in the community and always sees the positive of any situation.

It’s for these reasons that it’s appropriate for Calvert to get vastly rewarded with some of the biggest goals in franchise history. His numbers won’t wow you. But his demeanor and personality will.

What does it mean to be a Blue Jacket? Look no further than to Calvert. He embodies what it means to wear the star on the front. He is vastly underappreciated. Maybe when he’s gone will we truly appreciate what all he’s meant to the franchise. At this pace, he’s got many more moments to create for this team. And that’s good for everybody involved.