The 2018-19 NHL season is nearly four months away and pending a lack of offseason changes, the Detroit Red Wings roster is pretty much complete.

“I’m hoping and expecting that minimum of two, maybe four or five kids between the ages of 19 and 22 are on the roster next year that weren’t on the team to start this year,” general manager Ken Holland said during locker room cleanout in April.

While his comments may spark optimism for disgruntled Red Wings fans, they have to be taken lightly given the set roster.

Fourteen players are already under contract for 2018-19, not including the inevitable use of a long-term injured reserve spot for Johan Franzen. Among them are seven forwards in Henrik Zetterberg, Gustav Nyquist, Justin Abdelkader, Frans Nielsen, Darren Helm, Luke Glendening and Luke Witkowski.

Add in the five restricted free agents (RFA)—Dylan Larkin, Anthony Mantha, Tyler Bertuzzi, Andreas Athanasiou, and Martin Frk—and that brings the roster to 19 of 23 players. Including RFAs, the Red Wings will have 12 forwards, six defensemen and a goalie already on the roster heading into training camp. That means that, on the surface, all four open roles will be in a reserve spot. Before diving into roster hopefuls, let’s look at the depth chart as is. 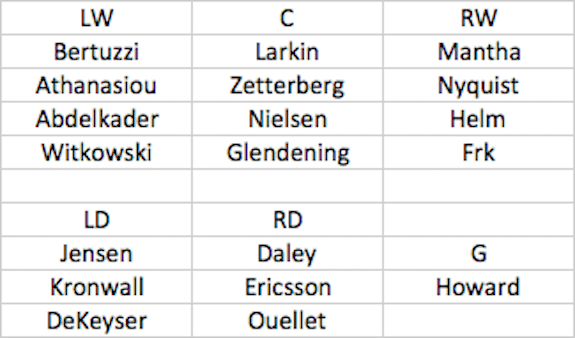 Not playing Witkowski and Ouellet in 2017-18 could mean they both take one of the reserve roles because no prospect will make the team just to waste away in the press box. That fills Holland’s quota of a minimum of two new faces and consequently, two of four roster spots.

The third spot will go to a backup goaltender, likely either recently signed Patrik Rybar or a free agent signing. With a couple of guys near NHL-ready both up front and on the backend, the final spot could be a 13th forward or eighth defenseman.

Evgeny Svechnikov, 21, and Michael Rasmussen, 19, lead the forward prospects for one—or two—spots in the top 12. But with just one regular spot open (assuming Witkowski is a regular healthy scratch), they’ll be in a battle. Svechnikov was the 19th overall pick in a loaded 2015 draft class and grew increasingly confident in a late-season, 14-game stint with the Red Wings.

Rasmussen was Detroit’s first top-ten pick (9th overall in 2017) since 1990 and scored four goals in seven preseason games in the NHL last fall. He scored 59 points (31 G, 28 A) in 47 games with the Western Hockey League’s (WHL) Tri-City Americans. He added another 16 goals and 33 points in 14 playoff games.

On the backend, one of the leading candidates is 20-year-old Filip Hronek, who is coming off a stellar rookie season with the Grand Rapids Griffins of the American Hockey League (AHL). Another is Joe Hicketts, 22, who got into five games with the Red Wings this season, bringing a refreshing, hard-hitting style.

Another potential defenseman to fill a spot is 2016 first-round pick (20th overall) Dennis Cholowski, 20, who took a huge step forward as a point-per-game player in the Western Hockey League (WHL) this season.

Lastly is Detroit’s sixth-overall pick this June which, unless a top forward slips to the Red Wings, will likely be one of the top defensemen in the draft.

The backup goalie have an important role as Howard enters the last year of his contract and will be 35 years old before the season ends. Neither Petr Mrazek nor Jared Coreau panned out and the lack of NHL-ready goalies in the organization poses a problem for the near future.

Rybar, 24, posted consecutive strong seasons in the Czech Republic’s top league and could prove to be Howard’s heir should his game translate to the NHL. Holland could look to free agency, however, where Carter Hutton and Jonathan Bernier lead the way.

Holland could look to move one or more players ahead of October. Detroit’s plethora of picks in this deep draft and the need to shed some salary and/or long-term contracts could mean Holland wheels and deals this offseason. Nyquist holds trade value with one year remaining. Abdelkader could be a more valuable asset with better talent around him and Helm could also be a depth upgrade for a true contender.

The truth is Detroit holds a lot of unfavorable contracts and hard-to-move pieces due to a combination of age, skill, salary and term.

But should Holland manage to pull off a deal or two, more roster spots could be made available for prospects, which would allow several more players to come in and prove their worth. 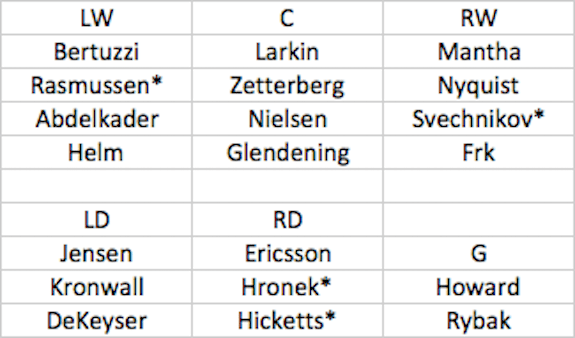 The chart shows a lot of youth which is exciting for Hockeytown, but Holland would likely steer away from such a move in fear of a long, ugly season. However, he’d be foolish to think that keeping the same roster after a 27th place finish would result in any real difference in regards to fighting for the postseason. The future is now.