The atmosphere in rinks around the globe are beginning to intensify as draft eligible players start out on their journey to realize their dreams of being selected by an NHL franchise next June in New Jersey. Leagues filled with draft prospects are already over one-quarter of the way through the season and scouts are expanding their lists as players continue to leave impressions with their standout performances. In North America, the Subway Super Series has commenced and all eyes are peeled on the Russian National Junior team talent and players from three Canadian Hockey League teams as these participating players compete for roster spots on their respective World Junior Championship squads. With the 2013 World Junior Championships six weeks away, draft eligible players have the opportunity to increase their value for the upcoming NHL Entry Draft if they are able to crack their national team’s rosters.

Over the course of the next eight months, scouting notepads will fill up, rankings will be revised (over and over) and players will continue to surprise and disappoint. The art and science of scouting remains an intense and delicate process that can test the mental stability of even the most confident hockey minds. After several months, thousands of miles traveled and countless rinks visited, it comes time to update my personal 2013 NHL Draft rankings to reflect my viewings of this year’s top prospects. In the following scripture, readers will discover my free-form scouting observations as they usually appear in my notebook and a prognosis on what type of NHL player these prospects could become in the future.

Scouting Notes: Explosive acceleration and deceptive quickness are two elements of MacKinnon’s elite skating abilities…able to create offense using his crafty feet…elite hockey sense allows him to read the play steps ahead of his competitors… remains the top offensive player of the 2013 NHL draft class.

Scouting Notes: Projects as a potential franchise all-situations, minute munching defenseman with great intangibles…able to play a complete game – physical, puck moving or as a power play contributor…owns ideal size and is mature beyond his years…his skating is extremely fluid that features strong pivots and allows him to find open lanes for passing or skate the puck into safety…Jones is one of the most touted defenders to come around in quite some time.

Scouting Notes: Big powerful centerman with elite puck possession skills…as one of the draft class’ youngest competitors, Barkov owns massive potential…good vision and offensive instincts keeps opponents on their toes as a shooter or playmaker…his slow heavy skating stride needs to continue to show improvement…Barkov has busted out of the gate in his draft season and will contest for a top 3 selection.

Scouting Notes: Showing early why Halifax wanted him in the lineup last year…tremendous offensive ability combined with tenacious work ethic results in a potent offensive prospect…good four-way mobility…complete shooting arsenal and great passing skills makes him difficult to read…his ability to find open space is uncanny… appears to have that it factor that stars possess.

Scouting Notes: Playmaking forward capable of playing centre or the wing…owns exceptional vision and can thread passes that only elite players can execute…displays elusive puck-handling abilities…an effective forward in all three zones and enters the draft as one of the most complete forwards… possesses some untapped potential and should push for a top five selection.

Scouting Notes: Formerly a forward, Pulock was converted to defense and is now one of the drafts class’ top offensive defensemen…fires an absolute howitzer from the point…offensive instincts are very good…possesses a quick crafty stick that helps the somewhat undersized defender win puck battles…Pulock remains a personal favourite especially in the NHL’s new era of puck-moving defenders.

Scouting Notes: Finnish defenseman that owns model NHL size and he uses it very effectively…has been touted from a very early age… can often make poor decisions (a flaw of these “project” types)…uses his size well to separate the puck from his attackers…good ability to operate the powerplay and transition the puck up the ice…remains a very raw prospect with great potential.

Scouting Notes: Prolific scorer with a knack for finding scoring areas…dynamic offensive winger with slick puck-handling skills that make him difficult to contain….owns great speed that he uses to separate from the opposition…will need to continue to produce and find ways to elude defenders with his less than ideal size.

Scouting Notes: Russian factor could result in him sliding from this spot but Nichushkin owns top 10 talents…lanky winger with a great reach that supports his wonderful puck possession game…drives the net with authority and features a terrific shot…could stand to improve his defensive zone coverage…very athletic player that showed extremely well at the 2012 U17 WHC.

Scouting Notes: Undersized and offensively creative forward with a bulldog-type of a game…owns some of the best vision of this draft class but is too individualistic at times…elite skater with the ability to change speeds quickly…extremely hungry player who can elevate his game during crucial moments…size remains a concern…Domi has the ability and skillset to challenge for a top 10 selection.

Scouting Notes: Confident mobile defenseman capable of playing mistake-free hockey…walks the line well on the powerplay and shows great poise in puck possession…shifty defenseman that understands when to rush and when to stay home….engages himself well physically…not the biggest defender…needs to improve body positioning and gap control to contain attackers.

Scouting Notes: Erne will be highly coveted as scouts love their power forward types…mature build with a skilful set of hands in tight…his development continues to trend upwards as he learns the ins and out of the game…relentless in puck pursuit and in battles along the wall…a very smart winger on both sides of the puck projects to be a relatively safe pick…lacks the ideal finesse game of a top 15 pick but competes hard making him difficult to play against.

Scouting Notes: Fantastic skater with a solid two-way game…remains an offensive threat with his creative passing abilities…proves to have a relentless puck pursuit and wants the puck on his stick at all times.

Scouting Notes: A “coach’s player” that rarely gives up anything on either side of the puck…impressive compete level, drive and intangibles…limited offensive upside but can raise his level of play during critical moments…engages in the cycle with great success…has very good NHL likelihood and that will see him drafted high.

Scouting Notes: Dickinson holds enormous professional potential and his future looks bright…potential draft board riser…continues to show tremendous progression…great work ethic and mind for the game…trustworthy in all situations…competes hard and owns the size and skill to become an effective top-6 forward.

Scouting Notes: Sturdy and powerful versatile forward that remains my personal favourite…utilized in London as a shutdown forward, Horvat showed his offensive skill set at the 2012 U17 WHC…elite hockey sense and defensive prowess…incredible strength on the puck…can dominant along the half-boards…opportunistic shooter….proficient faceoff prowess…his underrated offensive skills will emerge eventually for all to see…a type of player that wins championships

Scouting Notes: Hägg has shown well internationally as one of Europe’s top skilled defensemen…great skater that features quickness and agility…very cerebral player with a knack for finding seams as he transitions up the ice flawlessly…owns a hard and accurate shot … strong positional game …great size and skill…projects as a two-way defenseman that can control the pace of the game and log big minutes.

Scouting Notes: Lekhonen was a scoring star in the Finnish junior leagues…well-rounded player with a plethora of offensive skills but also has great intangibles (work ethic, leadership, etc.)…owns very good hockey sense…displays good skating ability but could engage physically more…projects as an above-average playmaker as he is very effective at finding open seams.

Scouting Notes: Every draft class has one of these hard-working win-at-all costs type of player…Compher lacks ideal size but he shows no hesitation to muck it up and compete hard for every puck…owns good offensive skills and can often become a difficult player to play against…fantastic character player with great versatility.

Scouting Notes: Santini plays in an NHL-ready body that highlights his great size and strength…two-way defenseman who relies on his physicality to keep defenders in check…moves the puck up the ice with very good efficiency…rarely makes mistakes, a testament to his great hockey sense…able to play in a shutdown role or as a puck mover…excellent in all three zones.

Scouting Notes: Rychel is an opportunistic scoring winger…the puck appears to follow him around the ice…uses his size well at times but needs to sustain it throughout the entirety of the game…possesses a dangerous shooting arsenal (snapshot, slapshot, backhand and wrist shot)…relies on teammates too much to get him the puck…occasionally shows errors in judgement forcing passes rather than making the simple play…he is most effective when involved physically (often too inconsistent)…owns a promising package of size and skill. 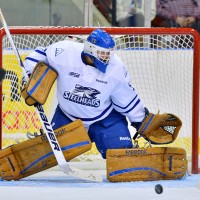 Scouting Notes: Athletic goaltender backstopping a stacked Halifax Mooseheads team…poised and calm between the pipes…butterfly goaltending style and quick lateral mobility takes away the lower portion of the net…will have the chance to showcase his big-game potential playing on a strong team.

Scouting Notes: Mantha is an emerging raw prospect with fantastic scoring abilities…smooth skater with quick feet…owns great pro-size that complements his opportunistic scoring style well…has a knack for sneaking into scoring areas and pounces quickly on loose pucks…uses his quick release to fool defenders often faking a shot and opting to pass to an open teammate…needs to play with a consistent work ethic as he occasionally floats while waiting for the puck to come to him…could improve his physical game…promising power forward prospect with a scoring touch.

Scouting Notes: Gauthier has been one of the biggest risers in this draft class…skating in a massive frame, Gauthier is a good skater for his size…shows a complete game in all areas of the ice…plays an effective game using his hockey sense and vision as his best weapon…good hands with an average shot….raw player with the potential to be an impactful two-way forward.

Scouting Notes: Duclair remains one of the class’ top skating forwards…uses his speed to create offense and is successful doing so at top speeds… his smaller stature will challenge him as a pro…owns a real flair for finding the back of the net.

Scouting Notes: Kujawinski has been highly touted since arriving in Kingston after a trade from Sarnia when he immediately started posting great numbers…impresses with his great physical build and above-average hockey sense…his wavering confidence and inconsistency leaves us wanting more but his raw skills are certainly there…drives the net well and protects the puck effectively using his large body…Kujawinski will need to show improved consistency and increased hunger for the puck to warrant a first round selection.

Scouting Notes: Competing on a less-than-stellar Screaming Eagles team, Carrier possesses a well-equipped toolbox featuring good size, strong skating skills, and advanced hockey sense…his game is well-developed and he can be trusted in all situations…packs a very good shot (especially his wrist and slapshot)…needs to play with more energy at times and engage himself in the physical play…lacks the offensive upside of other first rounders.

1 thought on “From the Scouting Notebook: 2013 NHL Entry Draft Rankings”