It’s really tough to make a National Hockey League roster as a teenager, let alone make a consistent impact as one. Calgary Flames left wing Matthew Tkachuk has achieved both feats this season, quietly cementing himself as a very valuable addition to the Flames lineup. While Tkachuk’s consistency throughout this season has earned him some accolades, he hasn’t really gotten much praise for how well he stacks up against other recent Flames freshmen.

As you can see, he stacks up incredibly well against some recent rookies in Calgary.

Through 52 games, Tkachuk has 10 goals and 34 points with a 57.1 Corsi For percentage. He’s played primarily with Mikael Backlund and Michael Frolik and has had 35.1 percent offensive-zone starts (the proportion of shifts that begin in the offensive zone, as compared to the defensive zone). Only a handful of Calgary’s players start more often in the defensive zone than Tkachuk. No Flames player has better possession stats than he does and he’s fourth on the team in scoring — just four points behind Backlund for the team lead.

Extrapolating his production over the remainder of the season, Tkachuk is on pace for 15 goals and 51 points. He’s also on pace for well over 100 penalty minutes, a testament to his agitating, pain-the-backside style of play that has made him a noticeable force in most of the team’s games this season.

Should Tkachuk reach his projected 51 point total, he’ll have the sixth highest-scoring rookie season since the Flames moved to Calgary. However, while Tkachuk is a 19-year-old kid fresh off playing in the Ontario Hockey League and being drafted, the five players that will likely stay ahead of him in the Flames all-time rookie scoring standings were all older and more experienced.

In recent seasons, the best comparisons scoring-wise are players that jumped straight from junior into the NHL. Dion Phaneuf was 20 in 2005-06 (his debut was postponed by the 2004-05 lockout) and had 49 points. Sam Bennett was 19 in 2015-16 and had 36 points, but played in the playoffs in 2014-15. Effectively the only appropriate apples-to-apples comparison for Tkachuk is Sean Monahan, who went straight to the NHL in 2013-14 after being drafted and turned 19 just after the season began. Monahan had 34 points over a full rookie season, as many as Tkachuk has through two-thirds of this season.

Effectively the only appropriate apples-to-apples comparison for Tkachuk is Sean Monahan, who went straight to the NHL in 2013-14 after being drafted and turned 19 just after the season began. Monahan had 34 points over a full rookie season, as many as Tkachuk has through two-thirds of this season.

Bearing in mind that contextual data for players only really exists for the last decade and a half, Tkachuk stacks up really well against recent Flames rookies when you ignore pure point production and focus instead on each player’s deployment, role and puck possession statistics.

The common theory on developing young NHL players is as follows: youngsters are typically brought along slowly and sheltered with strong linemates, lots of time in the offensive zone and a chance to generate goals and points against the other team’s lesser lights. Once that player has built their confidence up, then they’re transitioned into more challenging roles. 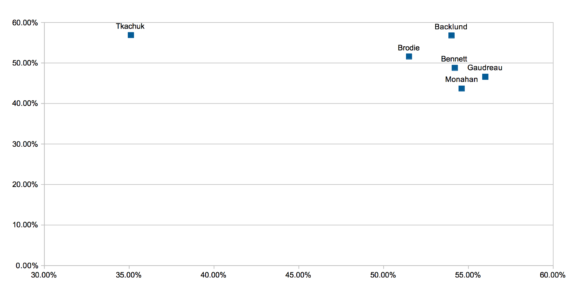 Gaudreau, Monahan, Bennett, Backlund and T.J. Brodie were all more sheltered in their rookie seasons in terms of having more favourable offensive zone starts and less crucial roles. Despite this, every single one of those players had worse possession stats than Tkachuk has in their rookie seasons – Backlund is the only player who performed almost as well as Tkachuk in his rookie year and he had the benefit of more offensive zone time. Tkachuk is on pace to exceed all of their offensive outputs save for Gaudreau.

It’s hard to project how Tkachuk will develop over time, but he’s off to a fantastic start to his NHL career.