Martin Brodeur is arguably one of the greatest (if not THE greatest) goalies to ever play the game of hockey. On the other hand, Mariano Rivera has been widely considered by many to be the greatest closer that the game of baseball has ever had.

While comparing hockey to baseball can be like comparing apples to oranges, Brodeur and Rivera have often been the players that have shut the door on the opposition when a game is on the line. Even though Martin Brodeur is out on the ice for a longer time than Rivera is on the mound, both players have played a pivotal role in the long-term success of their respective teams.

Here’s a breakdown of what value both players bring to their respective teams:

3.) Regular Season Stability – Saying that Brodeur and Rivera are just “stable” options for their teams would be doing the players a great disservice. However, the two players bring much stability to their teams as they are the players that are counted on the most when their team is in a precarious situation.

Martin Brodeur has always been a reliable option in net for the New Jersey Devils as the netminder has only had one regular season where his GAA has been above 2.50. Brodeur posted a 3.36 GAA in 1991-1992 in his first season when he played in only 4 NHL games and started in only two of them. In comparison, there have only been two seasons (1995 & 2007) where Mariano Rivera has had an ERA over 3.00. Rivera’s career-high ERA of 5.51 was established in his first year with the New York Yankees and his 2007 ERA (3.15) was still not that bad for a closer.

In contrast, Mariano Rivera is judged in part by his ability to convert a save opportunity. Throughout his career, Rivera has managed to save 608 total games (most all-time) and has saved 40 or more games in the regular season 8 different times. Even though Rivera has been a lifelong Yankee, he spent his first two years as a starter/reliever and did not start his career as New York’s closer until 1997.

Brodeur and Rivera might play two completely different sports, but the two players have enabled their respective teams to qualify for the postseason on countless occasions through strong and consistent regular season play. 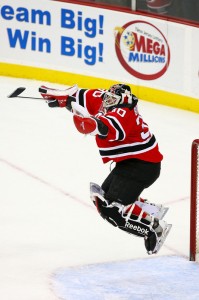 2.) Post-season Dominance –Both Rivera and Brodeur have set the bar for outstanding postseason performances in their respective sports.

Brodeur’s play in the Stanley Cup playoffs has been extraordinary as the goalie possesses a lifetime 113-91 W-L record with a 2.02 GAA and a .919 Save Percentage. Brodeur has also won the Stanley Cup three times, made five overall appearances in the Stanley Cup Finals, and has compiled the most shutouts in playoff history (24).

While Brodeur’s playoff statistics speak volumes about the goalie’s play, it is important to note that Brodeur’s play in the postseason is statistically better than his regular season play. Even though there is more room for error in the regular season, a true impact player will shine in the playoffs. Since the 1996-1997 season, Brodeur has led the Devils to the playoffs in 13 out of 14 NHL seasons and has been an iron-man for New Jersey as he has appeared in 184 total playoff games.

Much the same can be said about Rivera who has registered 42 postseason saves and has held his ERA to a measly 0.70. More importantly, Rivera has only blown one game in all of his postseason appearances (2001 vs. Arizona Diamondbacks) and has only given up a grand total of 2 home runs in the MLB playoffs. Much like Brodeur, Rivera has consistently helped his team get to the playoffs and win multiple championships. Even though Rivera played on some star-studded Yankee teams, he is a 5 time World Series Champion and has historically performed at a much higher level for his team in the playoffs.

Rivera’s success could be due in part to the product that the Steinbrenners have put on the field, but it would be unwise to disregard the reliever because of his supporting staff. Even though Martin Brodeur never had the crop of players that Rivera had around him, Brodeur was fortunate enough to play alongside defensive stalwarts such as Scott Stevens and Scott Niedermayer. Playing with forwards such as Patriak Elias, Jamie Langenbrunner, and Ilya Kovalchuk isn’t too shabby either, but it would also be rash to compare the marketability/spending power of the New York Yankees and the New Jersey Devils.

1.) The Best at His Position – Not much else can be said about Rivera and Brodeur as positional players. Whenever Rivera and Brodeur decide to retire, they will leave the game as legends and will have set records that will be hard to break in the near future, to say the least.

If Martin Brodeur decides to retire after his current contract expires, then he should definitely be considered as the game’s greatest goalie. Brodeur will probably never get to touch Patrick Roy’s record of 151 postseason victories, but the netminder has meant the world to his team during his time in New Jersey. The Colorado Avalanche teams that Patrick Roy won with were stacked with some of the game’s best talent, but Martin Brodeur was not afforded the same type of players. Brodeur achieved a huge amount of success while playing in some defensive oriented systems, and his steady play in the Atlantic Division of the Eastern Conference is more than noteworthy.

Furthermore, Brodeur has been able to adjust and consistently win games in the post-lockout NHL, and will still have some memorable performances to treat fans to until he retires. Even if opponents don’t shudder at the thought of facing Brodeur, every shooter, defenceman, and opposing goalie knows that the veteran goalie is still an elite player in the NHL.

Athletes in any sport will inevitably feel the effects of aging, but the greats set themselves apart from the rest during the latter part of their careers. With his 4-0 shutout of the Florida Panthers, Martin Brodeur took sole possession of the most postseason shutouts in the NHL. With every passing NHL season, Brodeur has proved that he still belongs in the NHL doing what he loves. Even though Brodeur will be 40 years old in a couple of weeks, there is no doubt that the Canadian netminder can still play his position exceptionally well and there is even fewer doubt that Lou Lamoriello wouldn’t want to being back the lifelong Devil if he felt up to par for another season of play.

A League of Their Own

Some might be asking themselves, why compare Martin Brodeur to Mariano Rivera since the former has been around longer than the latter? Well, Mariano Rivera is highly regarded as baseball’s best closer and it’s about time that hockey and sports fans alike realize that Martin Brodeur will leave the game of hockey as the best goalie.

Much like Rivera has set the benchmark for relievers and modern day closers, Brodeur has also set the benchmark for future goalies through his tremendous play in goal. Brodeur had to pass Patrick Roy on his way to hockey immortality, just like Rivera had to pass Trevor Hoffman’s all-time saves record in order to be cemented as the games greatest closer. Therefore, there should be no doubt in anyone’s mind as to why Brodeur deserves to be crowned as hockey’s best netminder when he decides to retire.

Martin Brodeur has been a model of consistency throughout his lengthy NHL career and will undoubtedly be enshrined in hockey’s hall of fame. Father time cannot keep Brodeur or Rivera away from the sport that they love and it is apparent why. Both athletes are simply in a league of their own and have dominated the opposition for years on end. Both athletes have transcended their level of play into the modern day and have kept up with the changes in their respective sports.

Not only have these two athletes been able to keep up a solid level of play throughout their careers, Brodeur and Rivera are two of the most humble players to ever grace their sports. If Rivera and Brodeur decide to close the books on their careers after this season, they will have earned the right to do so and will retire having displayed a loyalty to their team that is hard to come across in the modern day.

In closing, Martin Brodeur is to the New Jersey Devils what Mariano Rivera is to the New York Yankees. Without both of these players, the Devils and Yankees might not have won the championships that they amassed in the 1990s and the 2000s. If there will be anyone that surpasses Brodeur or Rivera on their way to sports immortality, then it will likely happen in the distant rather than the near future.

1 thought on “Is Martin Brodeur the Mariano Rivera of Hockey?”