Over the years, many athletes have been used as pitchmen for products. There was Ty Cobb for Coca-Cola, Joe Namath for Beautymist pantyhose, Joe DiMaggio for Mr. Coffee, and a host of others. In Toronto, it’s no secret that Maple Leafs players are among the most recognizable of all athletes, and there have been a number who’ve appeared in memorable print and television ads.

We’ve focused specifically on advertising gigs here, not team ads. And we’re also not talking about restaurants or things connected to the player through his name – we all know Tim Horton and the chain that bears his name, and there have been numerous other players who’ve built successful businesses since leaving hockey. And while some of these players have indeed run successful businesses, they’ve been seen in numerous endorsement spots. Not surprisingly, many of them are Hall of Famers and among the greatest Maple Leafs ever.

Often regarded as one of the greatest post-expansion Leafs, Darryl Sittler was a star for Toronto during the turbulent era of Harold Ballard’s ownership. Sittler performed on the CBC intermission feature ‘Showdown’ and was generally a good soldier through tough times. He is second in franchise scoring, a Canada Cup winner and a Hall of Fame player.

Certainly at the time this ad for Weetabix came out, the Leafs were not especially known as ‘golfers’ the way they may later have been. Here, Darryl teams with then-current Leaf Norm Ullman.

How about a deal on a car? (A Molson ad appears before Sittler’s ad. Note the thinly-veiled references to Sittler’s often strained relationship with Leafs management.)

And why not make your own pizzas at home?

Arriving to the Leafs in a trade for the very popular Wendel Clark, it took a only little while before Mats Sundin became a big star in Toronto. He became the face of the franchise, and he’d go on to capture the franchise all-time scoring title. He joined other Leafs greats in the Hall of Fame, had his number raised to the rafters, and appeared in some memorable television spots.

There was this famous one, starring Mats and The Great One at Maple Leaf Gardens and a little friendly competition.

A very funny series of commercials starring a fictional Habs goalie forced to give up the game due to nemesis Sundin.

And Mats makes a short cameo in this:

The man who brought hope back to Toronto after being drafted first overall in 1985 has always been associated with the Leafs, and even today his name and face can be found around the city. In fact, Wendel may actually be more involved in endorsements and appearances than our top 2 pitchmen, but he’s significantly more quiet about it, ranking him 3rd on this list.

In addition to 2 locations of Wendel Clark’s Sports Bar and Grill, Wendel has something of a marketing empire brewing at his website. Arguably one of the most popular Leafs ever, Clark interacts with fans at his establishments, plays hockey and golf with groups, is available for product endorsement, and lends his support to charity events. Additionally, he is employed by the Maple Leafs as a Community Representative.

Clark is very active in the area surrounding Toronto, and can be seen in commercials and events promoting Dove Men+Care® products.

Edward Shack had quite the reputation for his energetic play and willingness to scuffle. He wasn’t called ‘the Entertainer’ for nothing. And though he wasn’t a superstar scorer, he won 4 Stanley Cups and in 1966, the novelty song Clear the Track, Here’s Comes Shack hit number 1 in Canada and was on the charts for 3 months!

The only non-captain on the list, Eddie was quite adept at making a buck. He’s sold cars and Christmas trees, and was part owner of a Toronto-area golf course. But many in Ontario of a certain vintage recall these TV commercials for The Pop Shoppe:

Shackie also famously shaved off his moustache in promotions for Schick razors, lent his name to another small chain of donut stores, and his sense of humour was evident in this 1990 ad:

He arrived in Toronto and put the Leafs on his back, carrying the team to consecutive Conference Finals appearances and becoming an instant star. Easily among the most popular players in Maple Leaf history, Gilmour wasn’t just a star on the ice, he became a major pitchman around Toronto, and continues to be.

There was Dougie looking good:

He did TV spots for Bob McCown‘s morning show in 1993 (then-Toronto Blue Jay Rickey Henderson also did a similar spot). And he was featured in memorable print ads that appeared in Toronto transit shelters and magazines as part of this Milk campaign:

In 2004, Gilmour joined the ownership of Toronto-area lender MonsterMortgage.ca and appeared in their television ads. Currently he appears in commercials for Canadian security company AlarmForce as well as this one for the Asus TAICHI tablet: 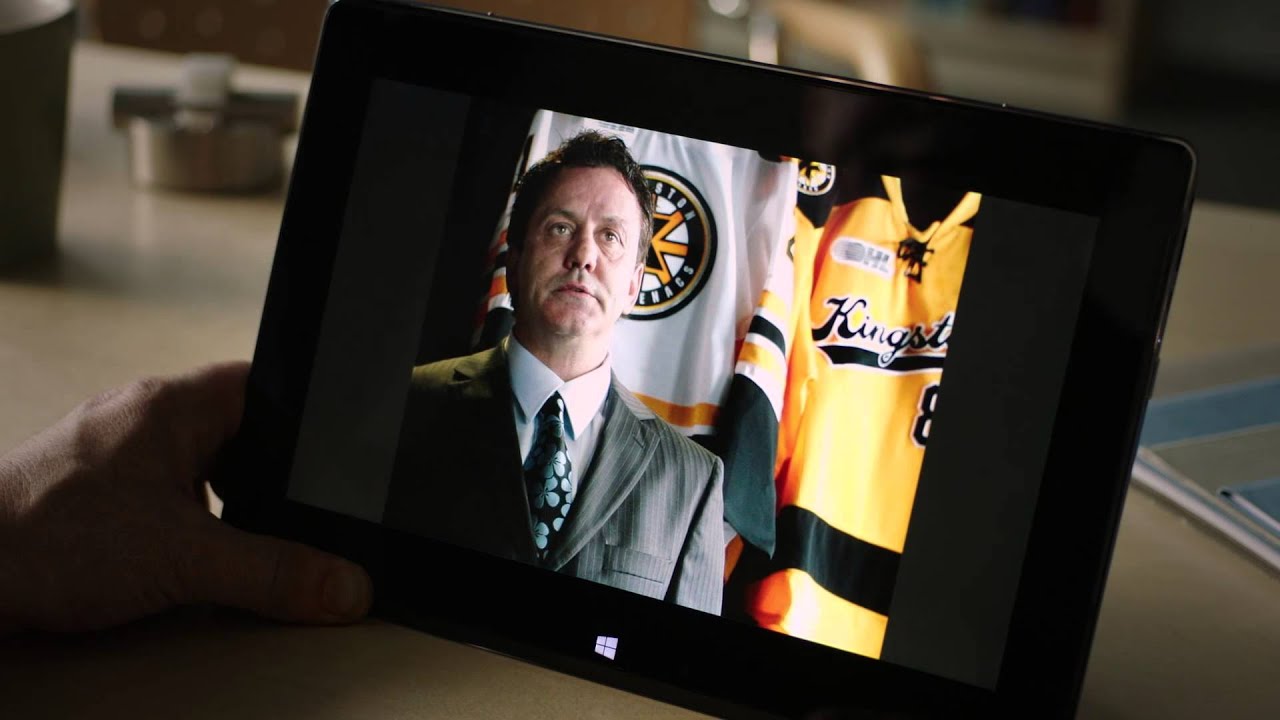 The way Dougie is still getting commercials in the Southern Ontario market, no doubt he must be regarded as one of the most recognizable pitchmen who ever skated the ice in Toronto.

We’ve named our top 5, but if you have other favorite Leafs in commercials or print ads (especially pre-expansion era), please leave a comment below, or on our Facebook page.