Habs fans have been telling everyone they know that the preseason doesn’t matter much. While wins may indeed be irrelevant, trends are not.  One observation is that the Montreal Canadiens, as yet, have not found their feet defensively. One challenge is a lack of top 4 talent at the position. Sure, Victor Mete has emerged as an exciting prospect. Likewise, Jakub Jerabek is likely to make the team. However, it turns out relying on a slew of slow-footed depth defensemen wasn’t a great idea. Who knew?

The best way to understand what the future may hold for the Habs is to look at the Bruins’ past. It does appear that raw talent is less important to head coach Claude Julien, than the successful deployment of his defensive system.

The Bruins under Julien played a collapsing zone defense. Everyone had a role. Defensemen protected the front of the net and suppressed shots from the crease. The center supported the defensemen down low. The wingers’ first priority was to collapse into the slot.  Goals against mattered less in the short term while players adapted to the system. Over time, Julien has used this system to deny shots on goal, win games, and bring a Stanley Cup to Boston. 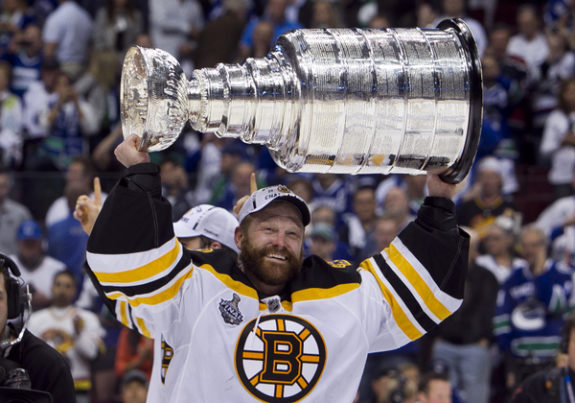 Julien’s formula for success is based on his “clarity of expectation.” Players need to understand their role and perform it. For Julien,“It’s not complicated, it really isn’t… we try and …eliminate the gray areas, make it black and white.”

A scenario here is useful: Imagine that a player from an opposing team carries the puck over the blue line and slams on the brakes. This offensive zone entry is sometimes called a “high delay” and is meant to encourage the defenseman to challenge the puck carrier. If they do, this can create odd-man opportunities down low as the other opposing forwards drive to the net. Under Julien’s system, the defenseman should never take the bait. Instead, the defenseman should stay low to seal off net-front drivers and protect against 2-on-1s.

Prioritizing defense means more than protecting the front of the net. Typically, it means that teams divide the ice in the defensive zone into quadrants. While each player defends specific territory, it can become confusing to track quick-moving players who cut through 2 quadrants with speed. If a defenseman closes in on a puck carrier, a forward is expected to cover for him, instead of anticipating a turnover and blowing the zone. This is by definition a conservative approach to puck management. It requires players to commit to their role as part of Julien’s system.

Julien’s approach is to create defense through solid structures and systems. Here is a useful overview of the Boston Bruins’ approach in each zone.

As Fluto Shinzawa points out, the Bruins prioritized protecting the front of the net in their own zone. One defenseman stayed in the front of the net while his partner pressured the puck. The strong­side winger and center focused on the puck while keeping an eye on the points. The weak­side winger collapsed into the slot. By staying in formation, Julien’s team in Boston always tried to dictate where the puck would go. Scoring chances should never come from anywhere on the ice that the players do not expect. Julien never worried if other teams cycled the puck high along the walls on the perimeter. While shots from the points, high slot, outside the dots are acceptable, shots from the net-front area are not.

Center is an important position in Julien’s system. They must cover large patches of territory. They should assist their defensemen down low and try to block passes to the slot. However, even on the rush, centers are expected to be ready to hustle and backcheck to prevent odd-man situations. This is hardly a unique expectation of a center. However, with Julien, this positional expectation goes further. Writing during Julien’s time in Boston, Fluto Shinzawa, reported the coach’s favorable impression of the LA Kings’ take on centers.

If you look at their centermen, they were always coming back. Even in the neutral zone, the two wingers could be forechecking the two D’s if the other team had the puck. If their three forwards on the other team were at the blue line, so was [LA’s] centerman. So it was a three on three. Defensively, if they were forechecking, there was always a guy skating back hard. They had layers. They did a good job of that.

Both Zone and Man coverage focus on how to set up defensive coverage once the offensive team has set up in your zone. In Man coverage, the defense provides constant puck pressure and denying time and space to the opponent. As the name suggests it means picking up an opposing player at center ice and sticking with them. It is intense and exhausting. It requires high skill and effective skating.

By contrast, zone coverage focuses on defensive side positioning by staying in a direct line between the puck and the net. It requires focus on both the player and the puck and dividing the zone into defined areas. Importantly, it requires layers of coverage in the defensive zone. As players move through pre-defined areas of the ice, defense partners must work together, ensuring blanket coverage and clogging up passing or shooting lanes to limit premium scoring chances.

Aaron Ward considers Julien’s new defensive system a “major shift” for the Canadiens. To be successful, it requires communication and adaptation. It will take some time to work out the kinks. The biggest issue is that players need to understand their partners very well. This is difficult when you have a different defensive partner every night.  Both Shea Weber and Karl Alzner initially struggled to adapt. With a year of Julien’s approach under his belt, Weber is ready for a full year under zone defense. Julien recently noted that Alzner is still adjusting.

Karl Alzner : "I come from a team with very different systems and it's taking me some time to learn."

What About the Offense?

There are reasons to be optimistic for the Habs under Julien. His more standardized defensive system gives everyone a clear sense of their role and imposes far more structure in their own end. However, this positional approach to prioritizing defense has problematic implications for the forwards. Fans might worry, despite the strengths of Julien’s defensive system, that it will stifle the sort of creativity required to score.

A demanding defense-first structure may lead forwards to hold in check their offensive intuition and imagination. That seemed to be the case in Boston, where the B’s were among the worst in the league at creating offense. As I have previously observed, the inability to create offense is a problem Canadiens fans know all too well.

We are at the beginning of a curious season in Montreal. Fans may accept low-scoring games if it means the Habs win more and are a contender in the playoffs. An open question is whether ignoring the trend of building fast, smart, puck-moving defensive cores with offensive upsides was a good move. Can a structurally sound defensive approach overcome the team’s relative lack of speed and offensive ability?