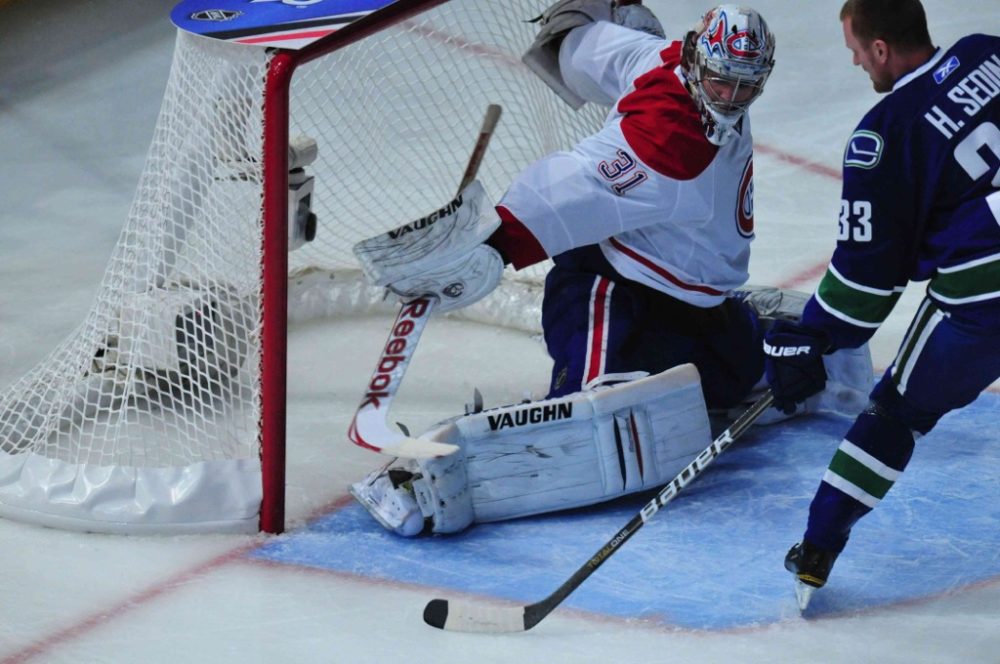 The Montreal Canadiens captured their 36th win in the team’s 66th game of the 2010-11 season yesterday evening versus the Tampa Bay Lightning thanks to yet another outstanding performance from 23 year old netminder, Carey Price.

The 5th overall selection from the 2005 NHL draft made 43 saves on 45 shots against a potent Tampa Bay team that boasts 2 of the leagues top 3 scorers, and was calm, cool and collected all evening long.

But that should come as no surprise to those who have followed the native of Anahim Lake, BC, since his days in with the Tri-City Americans. That said, the genie was truly let out of the bottle when he made his professional debut for the Hamilton Bulldogs in the spring of 2006-07, guiding the them to a Calder Cup championship while becoming the youngest player to earn the Jack A Butterfield trophy as playoff MVP.

Since then, Price has had his up and downs in his young career.

Lighting up the league as a rookie, Carey eventually cooled off through his second season of play, ultimately leading to Price’s most trying season as a player and a person in 2009-10.

The maturation process Carey went through last season, which may have been more akin to passing through a meat grinder than ‘learning lessons,’ has truly proven to be a beacon of inspiration for him this season as with each passing game any remaining doubt over his potential and future as a force in the NHL continue to quickly fade away.

But has Price come full circle?

Click here for my take on Price’s Vezina chances…

He certainly has in regard to his value to his teammates and the teams performance in the standings, but is he more than a team MVP?

While I make the case that Carey Price is quietly on his way to earning serious consideration for a Vezina Trophy, I also contend that he may possibly have a hat to throw into the ring when it comes to the Hart Trophy as league MVP.

The winner of the Hart Trophy is usually the MVP of his own team whose impact outshines that of all the other MVP’s…which is something that might very well define what he has meant to the Montreal Canadiens this season.

For, when it comes to Carey, it may have as much to with his statistical strength as his actual on-ice value.

Here’s a glimpse of statistical tirade Price is putting on;

And the list goes on, but there is more to Price’s play than simply his mastery of the crease this season. It lies in his demeanor and the affect he has on his teammates.

Price has started 85% of the Canadiens games this season(56/66) and is responsible for 86.1% of the teams points. His 31 wins and 6 OT/SO points account for 68 of the 79 points Montreal has on the season(ironically also 86.1%) and it’s hard to argue the team would have nearly as many were it not for his 7 shutouts.

In fact, when comparing teams ranked among the top 10 in the standings with the top 10 ranked goaltenders, Carey Price has been the most impressive and important of all.

For while Tim Thomas has 7 shutouts and leads the NHL in save percentage(.939) and gaa(1.97), he has only played in 46 games while his wins account for only 76.3% of the Bruins overall total.

The same goes for Jimmy Howard of the Red Wings and Roberto Luongo of the Vancouver Canucks for while both the Wings and Canucks have dominated the Western Conference, Howard has accounted for only 79.4%(31/39) of Detroit’s wins while Luongo has had a far lighter workload in earning only 73.1%(30/41) of Vancouver’s wins.

And while many will point out how well all 3 have played(to which I cannot argue), they still play for superior teams with highly capable backups who have not had to face season ending injuries to their top 2 defenseman.

So while it may seem like Price is not an obvious choice for the Vezina or perhaps even the Hart, the truth of the matter is that he is on pace to become the first goaltender to play 70 games in a season for the Habs since Jacques Plante accomplished the feat and is also quite likely playing his way onto a few award ballots in the process.

His play has startled opponents this season. His stick-handling(4th most assists for a goalie) and penchant for taking care of his own crease(4th most PIM for a goaltender) are constant indicators that coaches and players are going to have to start working overtime if they plan on beating him on anything other than an empty net.

His All-Star selection this season was no fluke and his status as MVP of the Montreal Canadiens is utterly irrefutable, but with another 16 games on the Canadiens calendar, there is also a strong possibility that Carey could play his way into a few more ballots and, who knows, perhaps some home ice advantage.

2 thoughts on “Most Valuable Price”