The whole is more than the sum of its parts — Aristotle

In the face of all my recent blather about the slippage on defense the Kings have seen this season, head coach Darryl Sutter was (of course) way ahead of me. While I was pontificating about how the defense wasn’t up to its usual standards this year — not the most difficult thing for a guy behind a keyboard to observe — Sutter was getting his hands dirty and fixing the problem. 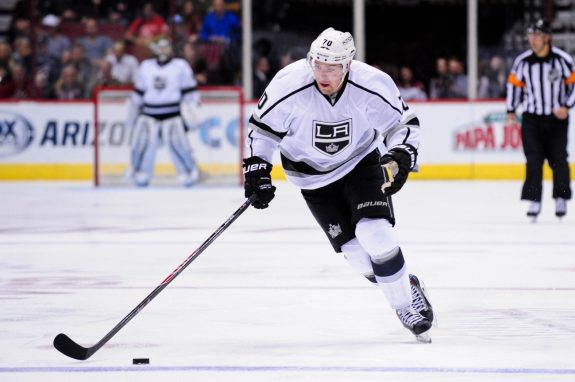 After having given up 28 goals in the previous seven games, L.A. surrendered a total of just six against San Jose, Calgary, and Edmonton. If shots are any indication, the defense has looked even better, allowing just 58 over the past three games. With exceptions here and there (the first period of the Calgary game and nearly the first 30 minutes versus the Oilers come to mind), the Kings haven’t simply had the advantage in terms of the flow of the game — they’ve dominated.

And yet, the Kings went 1-1-1 over that span, scoring a mere six goals of their own. It’s one of the smallest sample sizes imaginable, but now that the defense may be back on track, it’s time to work on the offense.

‘That 70s Line’ carried the Kings in October

How well did they do early on, you ask? Check it out:

They sure did get noticed. The Kings official Twitter account announced a ‘That 70s Line’ downloadable wallpaper:

Others tweeted out screen shots of their statistical significance, including this user trumpeting their respective place among the league’s +/- leaders:

#That70sLine is pretty amazing. I never thought I'd like Jeff Carter playing in a line without Richards. @lakings pic.twitter.com/Tjk4Mw2DTP

Still others resorted to Photoshop:

It was just eleven games, but ‘That 70s Line’ was quickly becoming a minor cultural phenomenon. They had also ascended into de facto top line status, especially after the continuing injury to Marian Gaborik and slow starts of both Anze Kopitar and Dustin Brown.

Marian Gaborik returned from injury, the trio cooled off a tad, Kopitar needed Carter on his line to help him get going, and other unrelated issues surfaced. ‘That 70s Line’ seemed to go the way of the ‘Pet Rock’ of the same era, which rocketed quickly to prominence before disappearing virtually overnight.

For quite some time, ‘That 70s Line’ has simply not been an option out on the ice for Los Angeles. Initially, it didn’t seem to matter, as the defense was the team’s Achilles’ heel, not the offense. Lately, however, the reverse has been the case. While the defense appears to have turned the corner, L.A.’s goal scoring has gone into the metaphorical deep freeze. 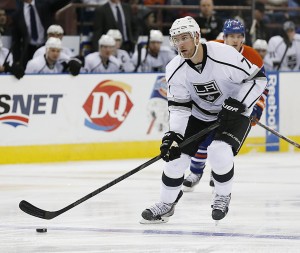 Of course, there’s no cause to panic. Despite some big names, the Kings didn’t consistently possess a high-octane offense during either of their Stanley Cup runs. Defense wins championships, and for all the struggles L.A. seems to have on one side of the ice, all that really matters is that they make the dance. They’ve proven over and over again that they are well-built for the playoffs.

With all that said, it’s time to jigger things once more. Gaborik and Kopitar are playing at a high level together, enough so that the big line is once again a force. There’s little risk in reassembling Carter/Toffoli/Pearson with the hopes that they’ll catch fire. Something needs to be done to shake the offensive doldrums, and if nothing else, the trio showed during both the 2014 playoffs and the first month of the year that they not only have great chemistry, but can energize the entire team — not to mention the league.