In year’s past, the Condors Report has been able to give insight into the Edmonton Oilers’ affiliate in Bakersfield. However, not all of the prospects within the farm system play in the AHL. So in an effort to expand the coverage related to the Oilers system, this season we’ll be looking at more frequent updates throughout the pipeline with a new series called “Oilers Prospects Update”.

This latest edition takes a look at three prospects; Filip Berglund, Cameron Hebig, and Caleb Jones. While Berglund is emerging as a solid top-pairing defender in Sweden, Hebig and Jones are finding their pro legs with the AHL’s Bakersfield Condors. Amongst the Oilers Top 20 Prospect’s rankings, Hebig was listed 12th, while Jones came in at 8th.

Here’s how these three are progressing through the early parts of the 2018-19 season.

Filip Berglund: Emerging as a Top Defender in SHL

Admittedly, it was an oversight not to rank Berglund amongst the Top 20 prospects in the Oilers system. If you recall, he was what became of the third round pick (91st overall) the Oilers acquired when they traded Justin Schultz to the Pittsburgh Penguins in February 2016. He’s still unsigned and is yet to debut in North America. He’s now playing in his eighth season within the Skelleftea organization which he’s been with since his U-16 days.

Whether Berglund ends up coming to North America or not remains to be seen. We should have an answer soon though. He signed a two-year extension with the Swedish club team back in December 2017, and there’s always the possibility there’s an NHL opt-out clause in that deal. The Oilers have four years from the time Berglund was drafted to sign him to an NHL entry-level contract (ELC), which gives them until June 2020.

That would get Berglund right to the end of his current deal in Sweden. It really doesn’t matter for Berglund and his agent at that point because whether he’s 22 (turns 22 in May 2019), or 23 year’s old, he’d be receiving a two-year ELC (the maximum allowable under the CBA for players of that age entering the league). Edmonton is looking good in Bakersfield right now with Ethan Bear, Caleb Jones, and William Lagessson developing.

Berglund has all the makings to be a reliable right shot defender at the NHL level, most likely in the No. 5 role. In the meantime, Berglund’s off to a strong start to the SHL season and already has four points in eight games. The 21-year-old is currently the No. 2 defender for his club team and is averaging 19:51 in ice-time. He’s emerged as a legitimate top-pairing option, much like William Lagesson did last season.

Cameron Hebig: A Jack of All Trades

In a recent conversation on Oilers Now, Condors head coach Jay Woodcroft sang the praises of Hebig. Bakersfield has been utilizing Hebig like a Swiss Army knife to start the year playing him on both special teams, as well in offensive and defensive roles. His versatility to play all three forward positions also allows him to play up and down the Condors lineup.

A key component to his game is his speed. It creates a ton of separation for him on the ice and has been a breath of fresh air for Woodcroft. Most of his time over the past few games has been spent with Josh Currie and John McFarland. He also got a brief look with Marody as well. Like Tyler Benson, Hebig also scored his first career AHL goal in the season opener against the Stockton Heat on Oct. 6. 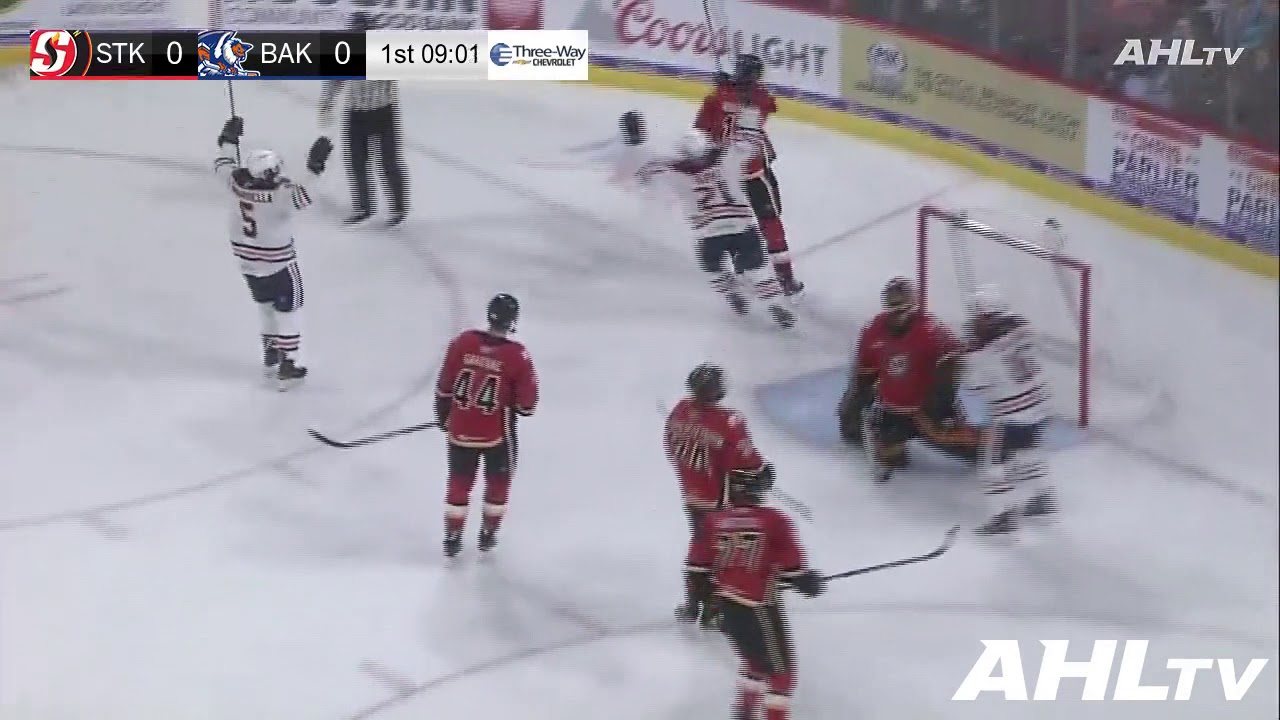 There’s a lot to like about Hebig in the early going who’s had a strong start to the year since his debut. He was never drafted but was on the Oilers radar for quite some time before they plucked him up and signed him to an ELC last December. The 21-year-old would go on to pot 41 goals and 90 points in 66 WHL games split between the Saskatoon Blades and the Regina Pats. He was a key piece for the Pats as they’d march their way to the 2018 Mastercard Memorial Cup Final.

The key now is figuring out how much of that offense will translate into Hebig’s pro game.There’s not as much time and space as there was in the WHL, defenders are bigger and stronger, and it’s harder to score goals in the AHL. If he can maintain this early success and prove his breakout campaign wasn’t mainly due to him being an older player in the WHL, the Oilers have themselves a heck of a hand here that could be a depth scorer for the big club in due time.

While Jones may not have had the type of main camp he desired, he’s been steadily playing as one of Bakersfield’s best defenders. He’s mainly been playing second-pairing minutes alongside Kevin Gravel and doing well in the process. Through the first two games of Bakersfield’s season, Jones played in the range of 22-23 minutes per night. In Woodcroft’s eyes, he gave Jones a glowing praise (see first link under Hebig), and emphasized what a key piece he was for the Condors.

Having three veterans on three different pairings at the AHL level has allowed Woodcroft to give Jones, Ethan Bear, and William Lagesson ample opportunity to play and grow with a steady presence on the ice next to them. It also gives Bakersfield the ability to let the youngsters be themselves and play a strong puck-rushing style that favors guys like Bear and Jones who had impressive offensive totals during their junior days.

The offense might not have been where Jones and the Oilers might’ve wanted in his rookie year as a pro, but he’s cleaned up some weaker parts of his game en route to eventually becoming a more complete defender. Don’t hesitate if the offense progresses at a slow rate with Jones, as he’s pegged to eventually develop into a  No. 4-5 two-way rearguard for the Oilers.

He’s got to improve his foot speed, overall mobility, and decision-making to take that next step. That said, expect a modest improvement over the 17 points in 58 AHL games that Jones put up last year. Expect something in the 20-25 point range this season which should include a healthy amount of power play time. The slow and steady approach will do the Oilers wonders with Jones.

All in all, there’s a good group of prospects developing in the system, and Edmonton’s overall drafting ability seems to have improved since 2015. There’s several key players the club has found outside the first round, including Berglund and Jones. As time goes by we’ll see how legitimate those claims will be, but right now, the Oilers look like they’ve got a strong pipeline perculating below the surface.