Pittsburgh’s eight-day break between second and third round playoff games is longer than their entire training camp was this season.

Players have had a chance to rest.  Coaches have tried to keep practices intense.  Media have been forced to dig to the depths of their notebooks for ‘storylines’.

The Eastern Conference Finals comes down to execution.  Powerplay, line matchups, forecheck, neutral zone, etc.  The coach and the team that can dictate play will win this series.

Pittsburgh likes to play an up-tempo style.  They break the puck out of their end, fire long passes through the neutral zone and then use their speed to punish on the forecheck.

Boston is more methodical.  They prefer a structured, physical style that wears down other teams.  They work for puck possession in the offensive zone and funnel the puck to the points for shots.

But what do all of those hockey buzzwords mean?

Aside from the scoreboard, how can a fan watching on Saturday night know which team is dictating the play? 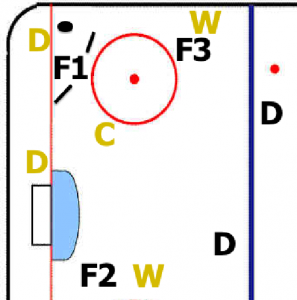 When Boston is forced to dump the puck, they often chip it cross-ice or into the corner of specific defensemen they want to target.

The first forward (F1 in diagram to the right) forechecks hard and takes away the middle of the ice as an option.  The Penguins’ defenseman (yellow D) has two options — pass it behind the net to his defense partner or move it up the boards to a winger.

Boston forwards are in position to take advantage of both.  F2 would pressure the defense partner as he tries to come around the net and F3 would activate on the winger along the boards if the Penguins choose that option.

Let’s assume the Penguins go ‘D to D’ and behind the net, as they often do.

In the picture below, the Bruins dumped the puck to Douglas Murray’s (3) corner.  He passed it to Matt Niskanen (2) behind the net and we see F2 attack the puck: 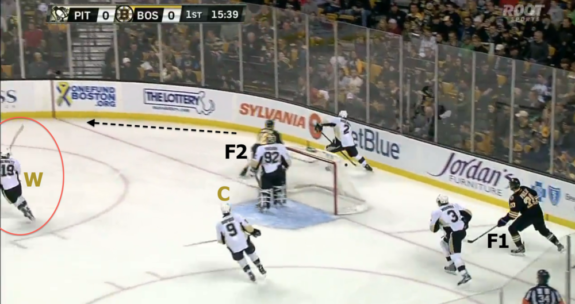 Niskanen’s easiest option under pressure is to fire the puck around the boards to the far-side winger.  In this case, Beau Bennett (19) is seeing the play develop and skating hard to get in position for an outlet pass.  The center Pascal Dupuis (9) is swinging into position for support.

Once Niskanen makes the pass, the Bruins’ far-side defenseman pinches down the boards.  In this case, F3 (Krejci 46) stays high and covers for the pinching defenseman: 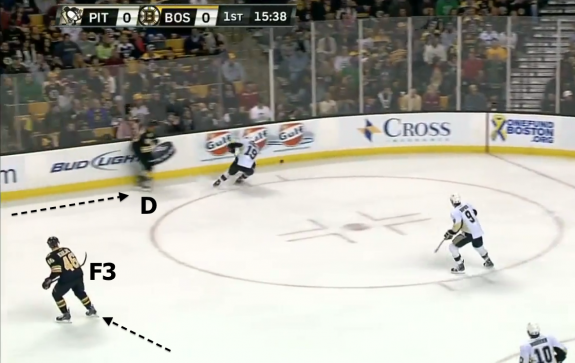 Rob Rossi of the Tribune-Review had a great article earlier in the week on the Bruins forecheck.  Rossi had quotes from Kris Letang and Matt Niskanen that sum up the situation we diagrammed above:

Letang: “Boston is similar to Ottawa.  The (first forward) is in really hard on you. The second one is coming in, and the third guy is up high. Their defensemen are conservative on one side, but on the far side they’re aggressive.”

Niskanen pointed out why the Boston Bruins have success: they’re smart.

Bruins coach Claude Julien doesn’t change up forechecks and forward combinations every shift like former Tampa coach Guy Boucher used to do. The Bruins are predictable, but efficient. They execute as a five-man unit with timing and precision.

The Bruins are a puck possession team, but not necessarily in the mold of the Detroit Red Wings — who try to avoid dumping the puck at all costs.

“Puck possession doesn’t mean you hold onto the puck,” Julien said.  “There’s times when you’re going to have to put it in areas where you can get it back. If you consider that puck possession, I’ll agree with you, but if you just mean holding onto the puck and not letting it go, that’s not our game.  We base it on a lot of forecheck.”

If the Bruins dump the puck and forecheck effectively, they should be able to create issues for the Penguins.  Douglas Murray is sluggish, and Brooks Orpik and Deryk Engelland struggle with breakout passes.

After a turnover, the Bruins cycle the puck and then work it back to the point.  If the Penguins are scrambling, the defenseman blasts a shot through traffic.  If he can’t get a quick release or a lane to the net isn’t there, he passes to his defensive partner on the far side for a shot.

Boston had a ton of success with this strategy against the passive NY Rangers defensive zone coverage in Round 2. Sooner or later a shot hits a body on the way through or the opposing goalie gets screened.

If the Bruins win battles for rebounds in front of the net and in the corners, they can funnel the puck back to the point and try again.

Watch this sequence from a matchup with the Penguins earlier this season and count the number of point shots they get:

They had three more point shots in this sequence that didn’t make it onto the video.

Tomas Vokoun is better than Marc-Andre Fleury at tracking shots through traffic, but the Penguins won’t survive the series if they allow Boston to do that again.

So how can the Penguins counter this strategy?

They’re not a great team in their own end under sustained pressure and that’s exactly how Boston excels.

The best way to limit the time you spend in your defensive zone is an effective breakout.

Remember the diagram above as we break down the following play.

Once again, the puck is dumped into Douglas Murray’s corner (that’s not a coincidence).  F1 pressures the puck and Murray looks like he wants to bump the puck to Niskanen, like we saw in the prior example: 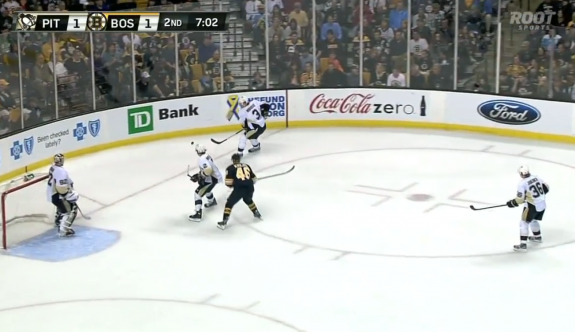 Krejci (F1) cheats towards Niskanen a bit, hoping to intercept the pass.  That doesn’t seem like much of an adjustment, but it ends up causing the forecheck to unravel.

F2 was in position to step up on Niskanen.  F3 was taking away the pass up the boards to the winger, but Krejci falls for the fake and Murray spins the other way: 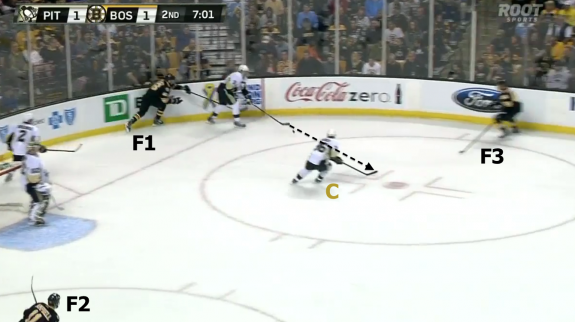 Center Jussi Jokinen times this perfectly and swings through the middle just as Murray spins out of the check.  Murray passes to Jokinen and the Penguins break out. (Random note: No player in the NHL has his stick always in position to receive passes better than Jokinen) 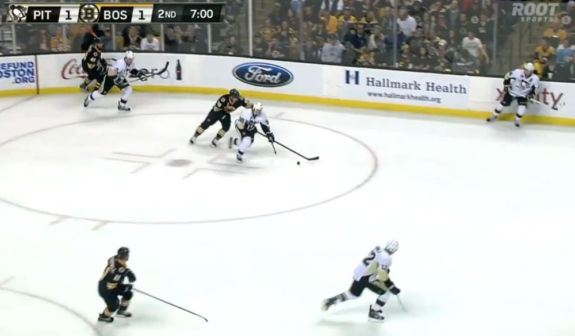 Expect the Penguins to target the Center on breakouts all series.

It’ll be up to their defensemen to sidestep F1 — easier said than done — but if the Bruins can’t sustain pressure in the offensive zone, they don’t have much of a chance to win.

Another variation the Penguins might try is to have the winger on the boards drop below F3.  The winger would then receive a breakout pass and bump the puck quickly to the center swinging through the middle.

This video clip is a good example of that type of breakout:

The Penguins will attack the Bruins in two ways. One will be off the rush with a ‘center drive’ attack (Click here for a breakdown) like they did in the clip above.  Murray drives the net, opening up space for Tyler Kennedy to make a cross-ice pass to Brandon Sutter.

The more common approach will be dump-and-chase in a more aggressive fashion than the Bruins.  Boston’s top shutdown pair of Zdeno Chara and Dennis Seidenberg has looked sluggish (and injured) in these playoffs.  Making both players chase down pucks and then absorb big hits will pay dividends as the series progresses.

It takes more than one player to chop down a tree like Chara, so expect the first Penguins forward to forecheck hard and separate him from the puck with a body blow while a second swoops in to pick up the scraps.

In the past, the Penguins always employed a 2-3 aggressive forecheck against Boston (we broke this down in depth two years ago), but they were more passive in their most recent meeting back in April.  Defensemen weren’t pinching and the Bruins were able to break the puck out easily to kickstart odd-man rushes.

I’d expect Pittsburgh to go back to the aggressive forecheck in Game 1 on home ice to put Boston back on their heels and then adjust from there.

The biggest key to the series is Boston defenseman Andrew Ference.  He’s struggling with an undisclosed injury and Julien said on Thursday that he hasn’t been medically cleared to play in Game 1.

Without Ference, Boston doesn’t have two defense pairs capable of shutting down the Crosby and Malkin lines.  If they keep Chara and Seidenberg together against Crosby, they face a miserable matchup of Johnny Boychuk and Matt Bartkowski against Iginla-Malkin-Neal.

If Boston splits up their top shutdown pair, they risk being stuck with no answer for both lines.