Viktor Arvidsson and his speed have been huge contributors to the Nashville Predators‘ identity since first being recognized in the 2017 Stanley Cup Final run. The way he blasts through the neutral zone and forces defenders on their heels always manages to get the fans out of their seats. Additionally, his willingness to battle in the gritty areas at a relatively short 5-foot-9 helped him quickly become a fan favorite.

It would negatively reflect on me if I failed to mention that he holds the regular-season franchise goal record at 34. Any good-natured Predators fan could go on about Arvidsson and his lion heart for hours. However, despite the effort, he lacks a fundamental component that upper-echelon players possess — a strong hockey IQ.

It has been very apparent so far in the 2020-21 season that Arvidsson is a shell of himself, which includes making some very concerning decisions with and without the puck. A popular narrative is that he hasn’t been the same since Robert Bortuzzo brutally cross-checked him in the back, causing harsh injuries that left him out for four weeks. It’s definitely a valid reason, and I’m sure it didn’t help his confidence. However, it’s well over a year removed from the incident, and he doesn’t seem to be improving in any of these areas. This begs the question, are these decisions due to a lack of confidence or his play-style being masked by goal scoring and creative playmaking?

Arvidsson is not Filip Forsberg. He doesn’t have the eye-hand coordination to consistently change his release and attack the defense from different angles depending on his body and hands. He is a volume shooter that pounds the puck at the net from all areas of the ice. From 2017 to 2020, he places fourth in individual shots for (iSF) on the Predators. He places behind the captain Roman Josi, the departed Craig Smith, and the aforementioned Forsberg. As for individual Corsi for (iCF), he places fourth behind Josi, Forsberg, and P.K. Subban. It’s clear that he is living up to his role. However, for the last two seasons, his shooting has been from very low-danger areas.

In this instance, red on the top is good and blue on the bottom is good. Those colors show where the unblocked shot attempts are coming from on the ice. The stronger the colors are, the more attempts being put on from that area. 2017-18 shows Arvidsson primarily shooting from the right side of the ice. 2018-19 (the year he broke the record) shows a knack for getting to the front of the net and continuing the trend of shooting from the right face-off dot. The next two seasons, he gradually moved away from the net, resulting in a lower expected goals for (xGF). This can also be shown in RAPM charts per Evolving-Hockey.

This version of Arvidsson was everywhere on the ice. He was shooting a lot, but they were from high-danger areas. He was contributing to almost two standard deviations worth of goals and driving an excess of that number as well.

Compare the first chart to this one, and the difference is drastic. He is still shooting a lot, albeit less, but the expected goals for per 60 (xGF/60) drops off a cliff. This can be attributed to attempting fewer shots and shooting from lower-danger areas. He is deployed on the power play (for the most part) has helped in xGF/60 in that department.

A major theme of Arvidsson’s offensive game is shooting off of the rush. He comes down the side with speed as the defenders frantically chase him and rifle a shot from the dot, usually the right one (evidenced in the heatmaps above found on HockeyViz). Some of the most memorable goals of Arvidsson’s career have been slap shots off the rush. It has become a patented part of his game. 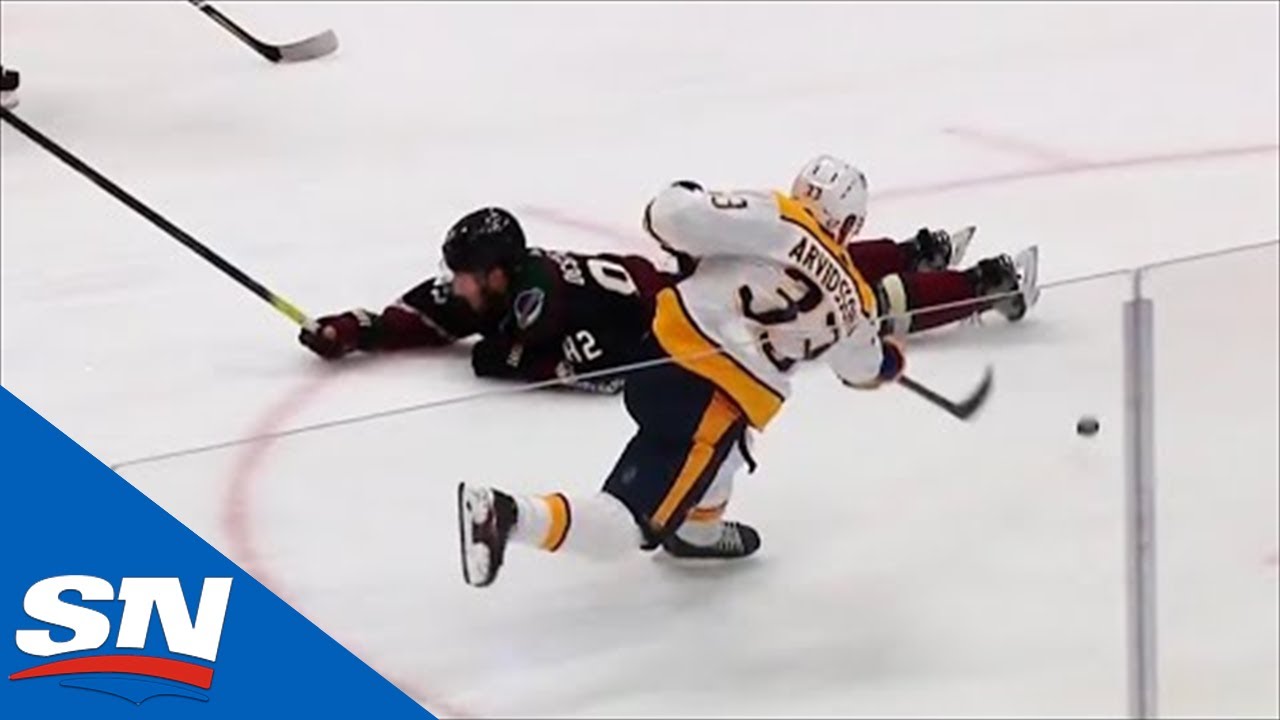 However, it has become that to a fault. Often he will abandon the opportunity for a better shot and resort to blasting one from the right circle. This lack of processing the game has proven to be detrimental to the Predators’ success. Arvidsson’s prowess around the net suggests he can score at any time within that vicinity. The slap shot is a good number two option, but not something that should be defaulted to when there are better plays available.

Additionally, when the slap shot could be considered the “best” option, Arvidsson misses the net consistently. If you have a solid slap shot that can be utilized in that situation, it should be put on the net at the end of the day. Firing shots anywhere but the net is not only a waste of a rush, but there are occasions where it results in a goal against. The puck rolls around the boards to the opposing player, resulting in an odd-man rush the other way. Arvidsson continues to use this tactic despite its ineffective nature and it is puzzling to say the least.

Speed and Only Speed

If it hasn’t been obvious so far, Arvidsson is fast. Very fast. So fast that instead of using his speed in advantageous ways, he uses it no matter the situation. A problem that has developed with him as of late has become his inability to stay on his feet, particularly when penetrating the offensive zone and going deep into the corner. He blows by the defender, gets to the corner, stops suddenly, but loses his balance in the process. Sometimes it doesn’t matter because the defenseman defends the opposing breakout well and keeps the zone. Other times the supporting forwards pick up the puck in time to keep possession.

However, despite the occasional save from his teammates, Arvidsson is often left on his own. The sequence most commonly found is a breakout, then the one-on-one matchup. Next, a controlled zone entry, a stat in which he ranked in the 87th percentile according to Corey Sznajder’s manually tracked micro stats. Then, the movement to the corner, a loss of balance, and ultimately a turnover. Arvidsson has trouble reading plays and doesn’t use his speed in reservation on breakouts. Instead, he forces a one-on-one situation in which he ends up being at a disadvantage. The sequence is turning into a bad habit for Arvidsson. It also costs the Predators valuable possession time and easily preventable goals against.

Arvidsson is a winger. As a winger, his defense is inherently less valuable than a center’s or, for obvious reasons, a defenseman’s. However, his subpar hockey IQ is well represented in his defensive prowess or lack thereof. He often gets caught puck-watching or chasing defenders. He cannot maintain a strong gap and put his stick in the right places to disrupt passing sequences or rush plays.

Nonetheless, his play along the walls at a stout 5-foot-9 is impressive. Arvidsson in 2018-19 clearly abandoned all defensive responsibilities to score goals. He was able to rebound the following season. With a worse offensive season came better defensive results, as most would expect with Arvidsson’s cherry-picking nature.

What Can Arvidsson Do to Improve?

Arvidsson has trouble reading plays at a high level, both offensively and defensively. He could utilize his skill set much more efficiently if he improved his defensive game even in the slightest. Creating turnovers in his own zone and keeping pucks to the outside would most likely benefit his run-and-gun style of play. Any training to improve defensive positioning with his body and stick simultaneously. His defensive game is not the only thing that needs to be improved upon if Arvidsson wants to get back to his previous form.

Any player with speed has an instant advantage in the game of hockey. A player like Arvidsson provides diversity to an otherwise slower lineup. However, not being able to use that speed in coordination with his mind — a subject written about by Hockey’s Arsenal — is detracting from the potential he could reach. Arvidsson very rarely takes a pre-scan of the ice before zooming through the neutral zone, which is touched on in the linked article.

It leaves him without an understanding of the circumstances around him. Pre-scanning the ice ahead of him and using his speed in reservation when penetrating the zone and moving to the corner. Any way that Arvidsson can limit his turnovers off the rush will greatly benefit his offensive game and the Predators.

Jeff is a consistent source for Red Wings content at The Hockey Writers. He was formerly a member of the Predators writing team, and he enjoys watching all sorts of hockey, from juniors to the pros. Jeff enjoys playing for his high school and local teams in Nashville as well. He’s a big proponent of hockey analytics, and you’ll often see him using lots of statistics and data to back up his main talking points. You can find his work here or check out his contributions on his Substack, Last Word on Hockey, On the Forecheck, Broad Street Hockey, Hockey Wilderness, and Puck Empire. Lastly, you can listen to him on the Youth Movement Podcast presented by On the Forecheck and the Triple Shift Podcast. For any inquiries about interviews or questions about statistics, analytics, or just general hockey opinions, you can message his Twitter, @jjmid04.