Reid Boucher burst onto the NHL scene with an assist and a momentous shootout goal in his NHL debut on December 4, 2013, with the New Jersey Devils. Now, heading into 2014-15, Boucher is determined to start the season with the big club even though the Devils have 14 forwards above him on their depth chart.

Drafted 99th overall in the 2011 NHL Entry Draft, Boucher opened the 2013-14 season with the Devils top affiliate, the Albany Devils of the American Hockey League. Skating on a line with AHL veteran Joe Whitney and newly acquired center Scott Timmins, he buried three goals and added four assists in nine October games. He finished the month with a four-game point streak in which he had two goals and two assists. He had by far his best month of the season in November when he had seven goals and 11 points in 12 games including a five-game goal streak to close out the month. He would not play in any games for the A-Devils in December but instead brought his streak down I-87 to the Prudential Center in Newark, where he would remain with New Jersey until he returned to the Albany lineup on January 24.

After notching his first NHL point with the primary assist on Michael Ryder’s second period goal against the Montreal Canadiens in his NHL debut, he scored the Devils first shootout goal in 15 chances to open the season. Despite the goal, New Jersey fell to the Canadiens 4-3.

Boucher picked up another assist three games later at the Columbus Blue Jackets but it wasn’t until his seventh NHL game that he lit the lamp for the first time in the NHL. A dozen minutes into the December 18 contest against the Ottawa Senators, Eric Gelinas fired a shot that caromed off the end boards and bounced right to Boucher, standing to the right of goaltender Robin Lehner. From there, Boucher buried the puck into the wide-open net to give the Devils a 2-0 lead. They eventually won 5-2. Boucher was named the Second Star of the Game.

Boucher scored his second NHL goal at the Colorado Avalanche on January 16 and got an assist in his final NHL game of the season on January 21 on home ice against the St. Louis Blues. In 23 games with Jersey’s Team during the 2013-14 season, Boucher had a pair of goals and five assists. On New Year’s Eve against the Pittsburgh Penguins, he played 15:34, his highest time on ice during the season with New Jersey. He also had four PIM during his stint with the big club.

Related: Dan Rice’s Q & A with Reid Boucher of the New Jersey Devils

Back with Albany, Boucher picked up an assist in each of his first two games back, bringing his AHL point streak to a season-high seven games. Throughout February, the Lansing, Michigan native struggled and finished with five points in ten games and cited “losing a little confidence” in his return to the AHL after spending nearly two months in the NHL. In the month’s final game, a 2-1 win over the Utica Comets at the Times Union Center, Boucher’s second period power-play wrist shot goal would hold up to be the game-winner, his first professional GWG. Timmins picked up the assist.

Reid Boucher wrists one against the Utica Comets on February 23, 2014, for his first professional game-winning goal: 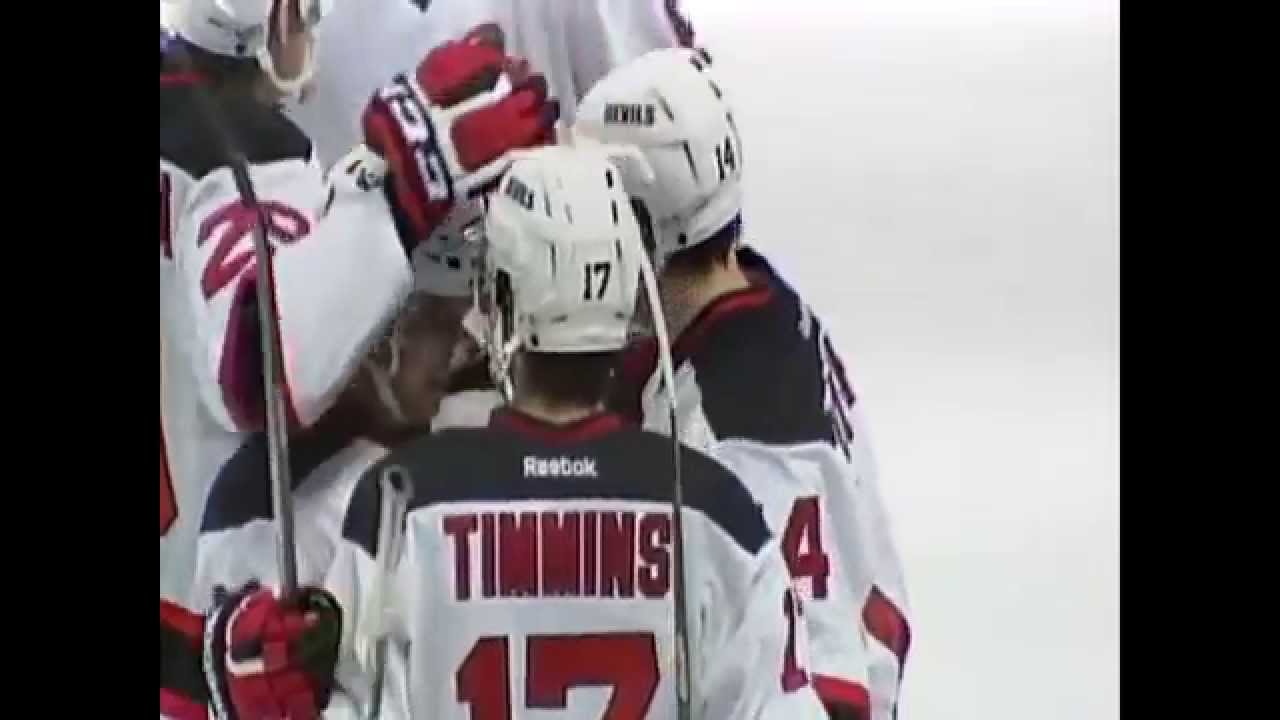 In his final 21 games to close out the season, Boucher scored eight goals and added four helpers. On April 13, he had his only multi-goal game of the season when he scored the first two goals of the game against the Syracuse Crunch in a 4-0 Albany victory. Boucher ended the season on a three-game point streak and finished with 22 goals, 16 assists, 38 points, a +/- of -3, and 10 penalty minutes in 56 games with Albany. His 38 points were 5th highest on the team and his 22 goals were tied with Whitney for 2nd. Mike Sislo had 23 to lead the A-Devils. Boucher’s 146 shots were also 2nd on the team behind Whitney’s 198. He was tied for 1st with Sislo with seven power-play goals.

His contributions helped Albany reach the postseason for the first time since 2010 when they were based in Lowell, Massachusetts. Down in Game 2 and in the series 1-0 to the St. John’s IceCaps, Boucher scored his lone postseason goal to knot the score just beyond the halfway point of the second period. Albany would go on to win 4-2 but the Devils fell in four games to the eventual Eastern Conference Champions. Boucher had 12 shots in the series which led all A-Devils. He also finished +1, one of only three Albany players along with Timmins and Harri Pesonen to end the series on the positive side.

One Full Pro Year Over, the Future is Bright for Reid Boucher

After scoring 62 goals and 95 points in 68 games with the Sarnia Sting of the OHL during the 2012-13 season and adding three goals and two assists in 11 games with Albany, Boucher had a solid season split between New Jersey and Albany in 2013-14. Following his first full professional season, Boucher took part in the 2014 Devils Rookie Camp, held from July 14 through July 18 at the AmeriHealth Pavilion at the Prudential Center. It was his fourth development camp with the Devils.

After the first (official) day, Boucher sounded like a man on a mission to crack the NHL roster come opening night this season, “I’m very determined. I didn’t change much from last summer. It seemed to work out pretty good for me. Stuck to my plan, and you have it in the back of your mind that you played there and you have a chance to do it again this year.”

Boucher continued, courtesy of the Albany Devils, “If you deserve it they will give it you. I can’t worry about who (the Devils) sign. I just have to work as hard as I can and try to earn a spot up there.”  He added, “I played a little bit up there and I want to start the season in the NHL. I think everybody in this room wants to do that and that’s what drives me right now.”

Head coach Peter DeBoer offered his take on the prize prospect, courtesy of the Devils official website, comparing him to a former Devils captain, “I’m looking for him to come into [training camp] and be in good shape. He’s a veteran and I’m looking for some leadership. He’s played some NHL games. For me with him, he needs to have a workmanlike mentality. Whether he’s playing on a first line or fourth line, he has to bring that workmanlike mentality. I told him that the beauty about Zach Parise was that he was a first-line player with a fourth-line work ethic. I think Reid can take some notes from that.”

Training camp will determine if Boucher will crack the NHL lineup come October but regardless of whether he opens the season in Newark or Albany, the future is bright for the Devils top offensive prospect.