With the NHL free-agency period fast approaching, the talk of the NHL is set to where the big name free-agents will end up.  Ryan Suter, Zach Parise and Alexander Semin are just a few of the names that are being floated around every NHL city.

Sometimes, the best free-agent signings may not even be one of the big guns.  Certain guys can sneak under the radar and turn out to be quite the impact player for his new team.  On the flipside, the big time player could turn out to be a big time flop.

Still, free-agent period is one of the most important times of the year for every NHL club.  Every team is always looking to improve; free-agency could be the deal-breaker when playoff time rolls around.

Last summer, there were 157 professional players that switched NHL clubs via free-agency.  Not all were impact but not all were busts, either.

The big-time busts from last summer were listed in the Top 5 Worst Free Agent Signings of 2011.

But for now, grab your Delorean because it’s time to take a look at the top five free-agent signings from 2011.

One of the best stories of the season came out of Phoenix.  Former GM of the Year winner and Coyotes GM Don Maloney had quite the problem heading into the summer of 2011 since long-time Coyotes starting goaltender Ilya Bryzgalov wanted a big contract.  With the Coyotes’ unstable ownership situation and financial troubles, the Coyotes had to move him to the Philadelphia Flyers before free-agency began.  There was an extremely short list of possible NHL starters and Mike Smith was at the bottom of the list, according to most NHL experts.

Coyotes Head Coach Dave Tippett had coached Smith in his time in Dallas a few years before.  He and Goaltender Coach Sean Burke agreed that Smith could be a quality starter, despite his inconsistency in parts of four seasons with the Tampa Bay Lightning.

Smith was signed on July 1 and was penciled in as the starter, since backup Jason LaBarbera was still in the mix.  The response to this was that Maloney and the Coyotes had taken a huge step back.

The playoffs were even a bigger success than the regular season.  Smith was one of only three goalies to finish the playoffs with a GAA lower than 2.00.  His .944 save percentage was second to only Conn Smythe winner Jonathan Quick.  He tied Quick and Vezina Trophy winner Henrik Lundqvist with three shutouts.  This was all in an effort that took the Coyotes to their only Western Conference Final in team history.

What will go down as one of the biggest bargains in NHL history, the Blues signed either a replacement for the departed backup Ty Conklin or the starting goalie for the Peoria Rivermen of the AHL.  Either way, Elliott rose above the low expectations in 2011-12.

In training camp, Elliott was slated as the #3 goaltender on the Blues’ depth chart.  Jaroslav Halak was expected to be the top minute-getter while youngster Ben Bishop was the top choice for the back-up role.  Elliott shined in camp and in the pre-season, stealing the back-up job from Bishop and earning a spot on the Blues’ opening day roster.

But Elliott was not finished there.  After a dismal start to the season by Halak, Elliott stormed onto the scene and stole the hearts of Blues fans.  Elliott’s brilliant play even jumpstarted Halak to take control of his game, as both goalies became the best 1-2 punch in the NHL.  Elliott was awarded a two-year, $3.6 million contract extension in January.  This unheralded success even gave the Blues the option to trade Bishop to the Ottawa Senators.

Elliott finished the season with the top-spot in GAA (1.56) and save percentage (.940) while also posting 9 shutouts, which was the second best total in the league.  He and Halak combined for 15 shutouts which tied a modern-day NHL record originally set by Chicago Blackhawks great Phil Esposito in 1969-70.  Elliott and Halak finished with the lowest goals-against in the league, winning the William M. Jennings Trophy. 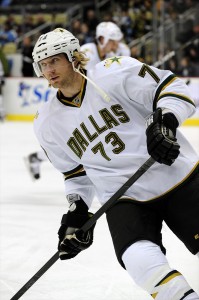 After Ryder won the Stanley Cup as a member of the Boston Bruins in 2011, word spread that he would become a hot commodity in the free-agent market.  The Bruins agreed with Ryder that they would negotiate with him if he was unable to find a suitor willing to pay him what he wanted.  It didn’t take long for Ryder to move on.

Stars GM Joe Nieuwendyk announced on July 1 that the club agreed to terms with the right-winger on a two-year deal worth $3.5 million each season.  It was widely speculated that the Stars overpaid for a player that hadn’t reached 30 goals since 2006-07.  The Stars needed offensive help since star Brad Richards had made it public that he would not return since he would be seeking a very expensive contract.  With a depleted offensive free-agent market, the Stars felt that they had to work with what they could afford.

The offense came from Ryder, as he finished the 2011-12 campaign with 35 goals, ranking first on the Stars’ roster.  He would also add 27 assists and 62 points to help the Stars finish just 6 points out of the playoffs.  With the expectations that the Stars had heading into the season, that is a pretty good finish.

One of many brilliant finds by Tallon, Tomas Fleischmann had a career year in 2011-12 in goals (27), assists (34) and points (61).  His goal and point totals set him atop the roster as the team-leader in both departments.

This came after Tallon was criticized for overpaying the then-27 year old.  Fleischmann, hailing from the Czech Republic, was considered being in the prime of his career and had already had stints with two separate teams (Washington and Colorado).  Fleischmann’s highest goal total before 2011-12 was 23 (set in 2009-10 with the Capitals); he was also diagnosed the season before with having two blood clots in his lungs.  He played in just 45 games in 2010-11.

“We are excited to welcome Tomas Fleischmann to the Florida Panthers organization,” said Tallon last summer when signing the forward. “Tomas is a big, hard-working winger that can play a variety of roles for our team and will add depth at the forward position.”

That depth became the go-to-guy in key situations.

With negotiations headed nowhere fast with starting goaltender Tomas Vokoun, Panthers GM Dale Tallon made the move on July 1 to lock up former Hart Trophy winner, Jose Theodore.  The veteran netminder had become a journeyman since leaving the Canadiens in 2006.  In the summer of 2010, Theodore was left unsigned after the Capitals cut him loose to free-agency.  He earned a job in Minnesota just before the regular season started, only because backup goalie Josh Harding had to undergo season-ending hip surgery.  Theodore posted a 15-11-3 record with a 2.71 GAA and an unimpressive .882 save percentage in 32 games.  Needless to say, Tallon’s decision seemed rash.

But Theodore quieted the critics almost immediately as two months into the season, the Panthers were in the driver’s seat, sitting pat as the Southeast Division leader on December 1.  Theodore’s goaltending was not the only reason for the Panthers’ early success; the Panthers had 10 new players added to their roster via free-agency or trade to start the 2011-12 season.

Theodore finished the 2011-12 campaign with a 2.46 GAA and a .917 save percentage, including 3 shutouts.  After the Panthers captured their first division title in franchise history, the Southern Florida hockey team lost in 7 games to the eventual Eastern Conference Champion New Jersey Devils.  This long series was due in large part to Theodore’s 30-save, 3-0 shutout victory in Game 5.

After scoring 6 goals and 13 points in the 2011 playoffs for the Nashville Predators, Ward hinted that he could be a big-game player.  He signed a contract with the Washington Capitals, who seemed to be lacking players with game-breaking potential.

Ward, used mostly as a gritty third and fourth line winger, scored just 6 goals in 73 games for the Capitals in the regular season.  But that is not what gets him an honorable mention; along with Ward’s checking presence, he scored one of the biggest goals in recent Capitals history.  During the Capitals playoff run, which saw them fall to the New York Rangers in 7 games during the second round, Ward scored the series-clinching goal in the Capitals’ first round upset of the Boston Bruins in overtime of Game 7.  While one goal in the playoffs may not be all that exciting, Ward was able to catapult a team in the playoffs that needed something to give their fans after years of playoff disaster.

Brad Richards was the most highly sought-after free-agent last summer and it took a lot for the Rangers to lock him up.  It took so much that it currently makes Richards the highest paid player in the NHL.

While Richards may not be the clear-cut best player in the NHL, he does bring a lot to the Rangers’ roster.  Because of his nose for the net and ability to find open linemates, Richards opens the ice up for his teammates to become more of a threat.  With Richards on the roster, Marian Gaborik was able to put 41 pucks in the net, ranking him third in the league.  Winger Ryan Callahan was able to have a career-year in goals (29), points (54) and power-play goals (13).  Richards was also able to have a pretty good season himself, posting 25 goals, 41 assists and 66 points in 82 games played.