After being ranked number one in the Eastern Conference and winning the Stanley Cup in 2004, the Tampa Bay Lightning became a mediocre team in the National Hockey League. They qualified for the playoffs in the two succeeding years as the seventh and eighth seeds, but failed to make it past the first round in both appearances. In 2008, the club hit rock bottom. The Lightning finished last in the NHL with 71 points, making it the first time the team missed the postseason since 2002.

New ownership arrived in the summer after Tampa Bay’s forgettable season. They were desperate to make changes and immediately looked to move Dan Boyle to help revive the franchise. Boyle had been subpar for the Bolts after their Cup victory, earning a minus-37 rating and suffering an injury that caused him to miss a good portion of the 2007-2008 season. However, the blueliner’s contract held a no-trade clause, which means management had to convince him he wanted to be dealt to another team. The organization said they would waive him if he was not moved by the start of the season.

In the summer of 2008, the San Jose Sharks were coming off of another disappointing playoff exit after being eliminated by the Dallas Stars in quadruple overtime in round two. Despite the loss, team knew they were close to being in the Stanley Cup Finals; they played well in the series and lost three of the six games in overtime. They just needed an extra push.

That offseason, general manager Doug Wilson elected to allow offensive-defenseman Brian Campbell to walk in free agency. He was merely a rental that played just 20 games in the regular season for San Jose. This team was close to being a legitimate contender but they needed goals from the point to be successful. The Sharks had to acquire another scoring defenseman to replace Campbell, and they were willing to give up picks and prospects to do so.

Before the start of the 2008-2009 campaign, both the Sharks and the Lighting came together to make a deal. Boyle willingly waived his no-trade clause to be moved to San Jose so Tampa Bay’s management took advantage of the opportunity. The Lightning chose to move Boyle, along with defenseman Brad Lukowich, to San Jose in exchange for Matt Carle, Ty Wishart, a 2009 first round pick, and a 2010 fourth round pick.

The way Tampa Bay handled their return in the trade was very interesting to say the least. The primary pieces of the deal for them were seemingly the young Matt Carle and the 2009 first round pick they acquired. However, both of these pickups were moved before the season’s end.

Just 12 games into the 2008-2009 campaign, the Lightning traded Carle and a 2009 third round pick (Simon Bertilsson) to the Philadelphia Flyers in exchange for Steve Eminger, Steve Downie, and a 2009 fourth rounder (Alex Hutchings). The Alaska native would return to Tampa Bay in 2012 via free agency.

The first round pick they obtained from San Jose was eventually traded (along with Filip Kuba and Alexandre Picard) to the Ottawa Senators for Andrej Meszaros. After being dealt to the Philadelphia Flyers, the New York Islanders, and the Columbus Blue Jackets, the pick ended up in the hands of the Anaheim Ducks, who used it to select Kyle Palmieri 26th overall. Meszaros did not fare too well in the bay as he posted just 33 points in 133 games while registering a poor minus-18 rating along with a 47.7% corsi.

The remaining two parts of the deal for Tampa Bay– Ty Wishart and the 2010 fourth rounder that became James Mullin– have been insignificant thus far for the franchise. Mullin has yet to break into the NHL and Wishart has played just five games with the club.

Boyle and Lukowich were both fantastic in teal, though it is pretty clear that Boyle made the bigger impact on the team. Lukowich played just 52 games in San Jose but earned a stunning 54.6% corsi in his lone season with the club. Unfortunately, he and Christian Ehrhoff were traded to the Vancouver Canucks after the Sharks were upset by the Ducks in the 2009 playoffs. In return they received Daniel Rahimi and Patrick White, neither of which has played a single game in the NHL. This trade is probably one of the worst moves San Jose has made in their existence.

While Lukowich lasted only one season and was practically traded for pocket lint, Boyle was a force in teal for six years. In 431 games as a Shark, he tallied 68 goals and 201 assists in addition to a plus-19 rating and a dominant 53.5% corsi. Boyle was a threat in the offensive zone and responsible on his end of the ice, which is why fans consider him one of the best defensemen in franchise history. He was even named an assistant captain during his tenure in San Jose.

On top of his dynamite statistics with the Sharks, he was also part of the 2010 Canadian Olympic hockey team. He registered six points and was a plus-five during the event as he helped Canada secure the gold medal in Vancouver. 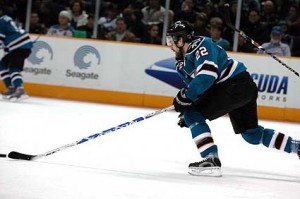 In the 2013-2014 campaign, Boyle suffered a concussion in a game against the St. Louis Blues after a dirty hit from Maxim Lapierre. While he was able to play two weeks later, he did not look the same as he did in previous years. He earned just 36 points in 75 games and was a minus-eight on the year, making it one of his worst seasons in his career. After the 2014 playoffs, Wilson traded the rights to Boyle to the New York Islanders for a conditional fifth round pick. The blueliner did not reach an agreement with the Islanders and instead signed a two-year deal with the neighboring New York Rangers.

When looking at the players involved, there is no doubt that San Jose wins this trade by a long shot. The only two players who made any impact for Tampa Bay were Steve Downie and Matt Carle after he signed with the team again in 2012. Even then, those two players are average at best. San Jose was able to get one solid defenseman for a year and one franchise defenseman for six years. Lukowich was good in his limited time with the Sharks and Boyle will be remembered as one of the top blueliners in the team’s history. Even though both players left the club for virtually nothing, San Jose able to get quality time out of both of them– especially Boyle.

The way the Lightning handled the trade was very strange and proved to be ineffective. They may be a playoff team now, but it is not because of this move. At the very least, the Sharks were able to utilize their acquisitions effectively while they had them and didn’t squander their assets on a bunch of short-term or irrelevant players without letting them play for at least one season. Tampa Bay ended up trading a good defenseman and a great defenseman for peanuts.

Miikka Kiprusoff for a Second Round Pick (Marc-Edouard Vlasic)