During the course of the long, arduous NHL schedule, there are times when a team has back-to-back games that paint an extremely accurate portrayal of where the team is.

For instance, the Buffalo Sabres had one of these occurrences last week when they faced the Pittsburgh Penguins at the Igloo and followed up with the Washington Capitals the next night at HSBC Arena.

For the Chicago Blackhawks, the 5th and 7th of March provided just that type of opportunity. In part one of the “twin-bill”, the Hawks faced off with their newest rival, the Vancouver Canucks. It was the type of “slobber-knocker” that Keith Jackson would have loved, with both teams playing a physical brand of hockey and coupling it with some great offensive play as well.

Then, to cap off the weekend, the Hawks took on their oldest rival, the Detroit Red Wings. These are two teams that still do not like each other, no matter what rule changes the NHL has implemented over the years to cut back on physical play, and they showed it on Sunday morning. There were hits galore, and the feistiness was palpable even through a television screen.

With rivalry weekend over, and the Blackhawks only getting two of the available four points, it seems like an appropriate time to step back from the proceedings, and get into the nitty gritty of what the fanbase learned about the team during the previous two games.

1. Are the Blackhawks Capable of Playing a Full 60 Minutes?

In what has slowly become a recurring theme after the Olympic break, the Blackhawks have played really solidly for about 40 minutes of the game, and for about 20 minutes each night they seem like they are on a different planet.

As an example, take their game on Tuesday night against the Islanders. Now, the team had just come together the day before this contest after the break ended, but there was still no excuse for the poor effort the team put forth in the second period of that game. They were out-hustled, out-muscled, and out everything during a second period barrage that saw them give up four goals and see Antti Niemi skate off the ice with his tail between his legs.

On Wednesday night against Edmonton, the Hawks pulled the exact same “take a period off” trick against the Oilers, and they came out after 40 minutes tied at two apiece. If it had been an actual NHL team they were taking on, not one missing nearly all of its halfway decent players, the Hawks very well could have found themselves facing a significant deficit.

Sunday afternoon was the icing on the cake, however. The Detroit Red Wings came out of the dressing room after the first intermission and proceeded to hang a five spot on the Hawks. They got traffic in front of the net, dictated the tempo of the contest, and chased Cristobal Huet from the game. Chicago did come back to make the game interesting toward the end, but the lack of urgency on the part of the team in the second period was extremely alarming.

Logically, with these kinds of lacking efforts in the second periods of games, the question can be asked as to whether or not this team is capable of putting together a solid effort for a full 60 minutes. Even in the Vancouver game, the Hawks were still able to take their feet off the gas and coast to victory, but when playoff time rolls around and every goal is magnified by 1000%, is Chicago going to be capable of stepping up to the challenge with a solid effort.

2. The Hawks Are Physical Enough to Stand Up to Anyone

At the beginning of the current NHL campaign, the standard knock on the Chicago Blackhawks was that they were an all sizzle, no steak kind of team. In other words, they could skate circles around you and fill the net up with goals from every angle, but they would never be a team that could hold its own in the physicality department.

Writer after writer and fan after fan banged the “get a goon” drum for the longest time before the season started, but as the campaign has progressed, it has become quickly apparent that the Hawks are a team that can hold its own when the going gets rough.

Players like Andrew Ladd, Troy Brouwer, and Dustin Byfuglien are not only guys who can score goals, but they can also throw their bodies around and drop the gloves if necessary. Ladd was a perfect symbol of that dichotomy today when he scored a hat trick against the Red Wings, and still flew around the ice hitting every white jersey that moved.

In addition, the team also possesses scrappers like Ben Eager and Adam Burish, who may not load up the stat sheet every night but can still change a game with a well-timed fight or taunting remark.

When your squad is a Stanley Cup contender, it is extremely important that they can defend themselves against physical challenges. As Chicago demonstrated in its cold-blooded beating of the Vancouver Canucks on Friday, they are more than capable of simultaneously scoring at will and beating the snot out of whoever dares to step up to them.

3. Role Players Will Make or Break This Team….. 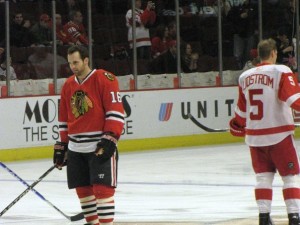 Sunday’s game against Detroit demonstrated a lot of qualities about the Blackhawks. One of the two biggest personality traits of this team has been the depth that they possess, and they illustrated it to perfection on Sunday afternoon.

The aforementioned Ladd had a hat trick in the game, but another player that didn’t draw a lot of attention with his play was Kim Johnsson. The minute-eating defenseman not only participated in any on-ice situation as needed (whether short-handed, on the power play, or even-strength), but he was very effective in all of them, including contributing an assist on Ladd’s second goal.

4. Unless the Defense Does First

As well as Kim Johnsson and Duncan Keith played in Sunday’s game against Detroit, there were a few weak spots that made themselves known. Niklas Hjalmarsson and Brian Campbell each had awful games, repeatedly finding themselves out of position and letting Detroit run amock in the second period.

Hawk defenders also made it a point not to clear out screens from in front of Cristobal Huet, making tracking the puck difficult and allowing two goals to be scored on the frazzled goaltender.

They also allowed several breakaways to be sprung, and that inability to seal off the backside of the offensive zone led to two more Detroit goals, including one by Pavel Datsyuk with two seconds left in the second period.

With the goaltending situation as a major question mark, the defense has to be solid enough in front of them to minimize opportunities, and to at least give their keepers a fighting shot at stopping pucks. If the team’s defense isn’t better than it was against Detroit, then this team could find themselves out on their rears after the first round of the playoffs come April.

5. Chicago Has Found the Formula To Score on Anyone

In the playoffs last season against the Detroit Red Wings, the Blackhawks encountered stiff resistance that made it nearly impossible to score goals. Whether it was the unrelenting physical play Detroit employed, or the breakout skill of the Wings forwards, the Hawks were back on their heels for much of the series, and it was a major contributing factor to their defeat in five games.

This season, however, the Blackhawks have begun to solve the riddle of complex and physically daunting defenses. Not only is the key to hit back when the team is being hit hard, but it also involves smarter puck movement and discipline, and Chicago seems to have generated that maturity in droves this season.

While maturity can be pointed to as the main reason guys like Patrick Kane and Jonathan Toews have become smarter with the puck, another contributing factor has been the acquisition of Marian Hossa. Perhaps better than any other player on the ice, Hossa has been a mainstay in the Hawks offense, and his deft passing and nose for openings to skate through has helped mold the Hawks into one of the best puck possession teams in the league.

Having blue liners who can move the puck like Brian Campbell and Duncan Keith certainly don’t hinder matters either, but the Blackhawks’ time of possession certainly is the biggest factor in their offensive success.

1 thought on “What Rivalry Weekend Taught Us About the Blackhawks”