Brendan Morrow has a cap hit of $4.1 million.

Douglas Murray has a cap hit of $2.5 million.

The Pittsburgh Penguins added all three to their payroll this week without sacrificing a single roster player. They’re already committing $8.7 million each to former MVP’s Sidney Crosby and Evgeni Malkin, and $5 million each to James Neal, Paul Martin, and Marc-Andre Fleury.

How can this dream team fit underneath the salary cap? And how is it possible that, as of today, General Manager Ray Shero still has the ability to add over $15 million more in cap hits via trade?

In short, the lockout was the best thing to ever happen to the Pittsburgh Penguins. While the salary cap is officially at $60 million this season, teams are permitted to spend up to $70.2 million as part of transition rules to help them adjust to the new CBA limitations.  The league and players’ association agreed that it was unfair to expect General Managers to suddenly trim millions of dollars in payroll in a matter of days coming out of the lockout.

The Tribune-Review’s Rob Rossi says that the trade of Jordan Staal at the draft last June also kick-started a salary cap perfect storm for the Penguins and Shero:

Staal was traded at the NHL Entry Draft, as was defenseman Zbynek Michalek. Even with center Brandon Sutter as part of the return, the Penguins saved nearly $6 million in cap space. They also bolstered the strong part of their prospect system — defense — through a couple of Round 1 picks and players who came from Carolina and Phoenix.

The perceived whiffs were a stroke of luck; Shero’s cap space was preserved.

The combination of that cap space, the depth among defensive prospects and a collection of draft picks — the Penguins basically had held onto their selections instead of including them for rental players at the past three trade deadlines — has proven golden.

The Penguins had money and assets to make a play during this deadline period.

I’d argue that the current situation could even be linked all the way back to Shero’s swing-and-miss with Marian Hossa in the summer of 2008.

In our ‘Penguins Blueprint’ series two years ago, we discussed how the Hossa experience forever changed the way Shero approached management, contract negotiations, and trades. Shero offered Hossa his choice of five, six, or seven years at $7 million per season.  When Hossa turned his back on the Penguins and opted for a one-year deal with Detroit instead, Shero was left without a Plan B.

He’s never again allowed a player to dictate his strategy.

When Sergei Gonchar was unsure about his future in Pittsburgh, Shero quickly moved on to Dan Hamhuis, Paul Martin, and Zbynek Michalek.

When Staal made it quietly known that he had his sights set on Carolina one way or another, Shero locked in maximum return through a trade with the Hurricanes.

When the shortened 2013 season created a seller’s market with limited supply and excess demand, Shero was decisive again.  He overpaid for Brenden Morrow and Douglas Murray, but made sure he got the players he wanted.  The Jarome Iginla deal all but fell into his lap after Iginla turned a 29-team auction into a one-team exchange by using his no-trade clause to force a trade to Pittsburgh.

It was all possible because Shero was proactive and decisive.

And it was all possible because of the lockout and salary cap space.

The Penguins entered the season with just over $9 million in space under the $70.2 million salary cap ceiling.  Although Eric Tangradi and Ben Lovejoy were traded at midseason, it still doesn’t make sense that the Penguins could add three players this week with a combined cap hit of $13.7 million. 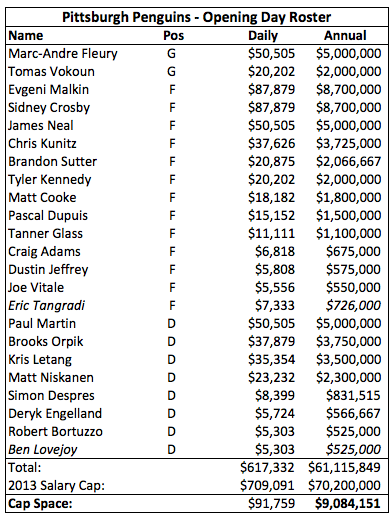 The answer lies in how cap space is actually calculated throughout the season.  Media and fans often talk about player cap hits on an annualized basis (like we just did), but the league actually calculates team payroll on a daily basis.

For example, imagine Father Bettman has given your team an “allowance” of $70.2 million for this season.  That amount is divided by the number of days in the season (99) to get a daily allowance of about $709,000.

Apply the same calculation to a player’s cap hit and you get his daily “cost” to the team.  Crosby and Malkin cost the Penguins about $88,000 per day.  Neal, Martin, and Fleury cost about $51,000 per day.  Every day that a player is on the NHL roster his cost gets charged against the team’s allowance — even if he’s injured.

A team can’t tap into tomorrow’s allowance to pay today’s payroll, but if they don’t spend their entire $709k allowance on a given day, they can effectively stash the leftover amount for later in the season.

This is where the Penguins benefited from starting the season with a lower payroll.  Because they had $9 million in annual cap space to start the year, we can assume they were stashing at a rate of about $92,000 per day.  After nearly 65 days of stashing those dollars, Shero had the flexibility to do anything and everything he wanted to at the trade deadline.

He already added Iginla ($71k), Morrow ($41k), and Murray ($25k).  By our calculations, Shero still has the room to add $157k of daily costs to his roster as of today.  That translates to an ability to add players with about $15.8 million in annual cap hits.

The Penguins aren’t alone in this situation.

Cup contenders like Chicago ($13m), Boston ($24m), and Anaheim ($50m) can all add insane amounts of cap hits for this season.  With that in mind, Shero’s proactive moves have probably driven the prices for other remaining rentals (Jaromir Jagr, Mike Ribeiro) through the roof.  As we discussed a few weeks ago, teams aren’t going to want players with additional years left on their contracts but they’ll gladly add high-priced rentals for this season.

While they battle in an auction to determine who gets to overspend for 10 games of Jagr, Shero will have moved on to his next prey.

On Monday morning, we’ll reveal who the final piece of the playoff roster is likely to be.

[Note: The above numbers were adjusted to fix an error in number of days calculated]

4 thoughts on “How is the Penguins’ Dream Team Actually Cap Compliant?”