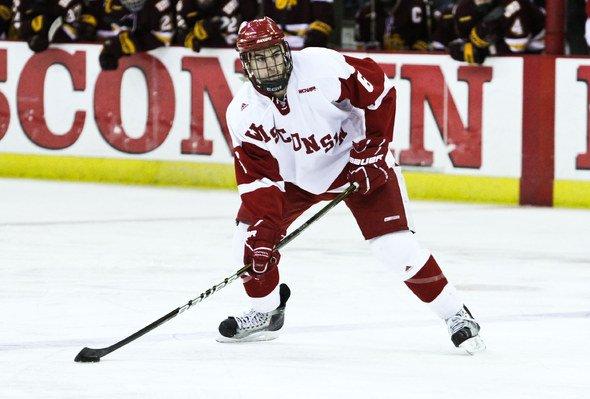 On June 21, 2008 defenseman Justin Schultz was drafted in the second round (43rd overall) by the Anaheim Ducks. He spent the season immediately following his draft year playing for the Westside Warriors of the BCHL, skating to an eye-catching 50 points (15g, 35a) in 49 games. Following the 08-09 season, Schultz left for the University of Wisconsin and the NCAA. Under the watchful eye of Wisconsin coach Mike Eaves, Schultz steadily developed as an offensive defenseman, twice being nominated for the Hobey Baker award, racking up a career total of 113 points (40g, 73a) in 121 games, and generally becoming widely thought of as a ‘can’t miss/blue chip’ prospect.

The plan was for Schultz to, along with Cam Fowler, become the bedrock upon which Anaheim would build their defensive corps for years to come. Ducks fans fantasized about a one-two power play attack featuring Schultz and Fowler – fantasized about claiming as their own not one but two defensemen who could skate like the wind, make a great first pass, and light the lamp with regularity. Dynamic didn’t begin to describe the theoretical Schultz/Fowler combo. It should have been the beginning of something special.

Now though, due to a ridiculous loophole in the CBA, and despite spending four years patiently waiting for Schultz to develop, the Anaheim Ducks will lose Schultz to free agency without him ever having played a single game for them. The Ducks will never get to sew ‘SCHULTZ’ on to the back of an Anaheim jersey, or pencil him into a line-up card. Justin Schultz will never score a goal for the Anaheim Ducks short of pulling a Steve Smith (delicious irony if ever there was such a thing).

From the Collective Bargaining Agreement, Section C of Article 8.6:

In plain English this means that because Schultz played a year of junior hockey after his draft year and before matriculating as a University student, should the Ducks be unable to sign him to an entry-level contract, he can become a free agent four years after being drafted and sign wherever he wishes. (The standard course of action for a player unable to come to terms with the team that drafted him is to re-enter the draft as a 22-year-old – a far more equitable system that simultaneously doesn’t reward players for having plans of their own.)

In even plainer English, what this means is that the plan was bunk.

The Seeds of Schultz’s Spurning Anaheim

The narrative of Justin Schultz’s suddenly high profile, glacially-paced divorce from Anaheim plays something like slow, inevitable spiral down into a hopeless situation. One needs only read the following headlines from Eric Stephens and the OC Register to get a sense for the trajectory of this story.

From March 12th, just as Wisconsin’s season had finished:

Could Schultz Be Joining Ducks Soon?

From March 29th, as word came down that Schultz wanted to finish the school year out:

From April 5th, as the CBA loophole was becoming more widely reported on:

Ducks Believe They Are Still in Mix For Schultz

And finally, from June 24th:

It isn’t as though a high profile draft pick deciding to (or at least threatening to) spurn the organization that drafted him hasn’t happened before. There was, of course, the Eric Lindros-Quebec drama, and even Super Mario didn’t initially want to be a Penguin. In fact, this exact loophole in the CBA has been exploited before, in the case of Blake Wheeler and the Phoenix Coyotes. It’s difficult to excuse this kind of behavior in any circumstance, but that said, there is a distinct difference between Lindros/Lemieux and Schultz/Wheeler.

Where both Lindros and Lemieux were hailed as transcendent, once in a generation talents pegged since their mid-teens to be taken first overall in their respective draft years and therefore understandably possessed of large egos, Justin Schultz and Blake Wheeler are simply very good-to-great hockey players. They’re not not ‘once in a generation’ talents. And yet, in Schultz’s case, he’s currently holed up in a conference room at Newport Sports Management (his representation) in Toronto, ‘deigning’ to meet with the movers and shakers of a handful of NHL teams, and weighing their “please, please, please come to play for us” pitches in advance of July 1st (when Schultz can actually put pen to paper and get his NHL career in gear).

Without having played so much as a single game at any professional level. Sounds pretty egocentric.

Simply put, the 21-year-old rookie is pulling a Brad Richards (he of the Conn Smythe trophy, Stanley Cup ring, and legitimate status as one of the premier centers in the game), and it’s more than a little bit embarrassing – to Schultz, to the League, and to the game itself.

Keep in mind that money is not the issue with Schultz. Because of his age, he can only be signed to a two-year entry-level-deal worth a $925,000 base salary, including $92,500 signing bonus, plus $2.85 million in performance bonuses. No, this is simply a matter of Justin Schultz deciding take matters into Justin Schultz’s hands and dictate where Justin Schultz wants to play – and Anaheim is clearly not that place. Why? We may never know. Schultz and his camp have been completely silent as to why he doesn’t want to sign in Anaheim. But in not saying anything, Schultz has effectively let a controlled burn become a wild fire.

(For what it’s worth, according to Anaheim GM Bob Murray, Schultz had given every indication that he was excited to join the Ducks.)

Many key Ducks decision makers have talked w/Schultz this season, coming away w/feeling that he wants to play in ANA.

Justin Schultz must have one hell of a poker face…

Perhaps all of this ‘holding court’ and the resultant media circus is exactly what Schultz’s agent desires – after all, it’s a hell of an advertisement for Newport Sports Management and the power they apparently wield. What’s a shame, however, is that despite Justin Schultz getting exactly he wants, by handling this situation the way Newport Sports Management has, they’re setting their client up for failure.

To reiterate: Justin Schultz Has Played Zero Games In The National Hockey League – and the NHL is a long step up from the NCAA. Who knows, maybe Schultz will sign wherever his heart desires and step out onto the ice for his first NHL shift, strip a player like Pavel Datsyuk of the puck, go the other way and score a spectacular goal on an end-to-end rush, and then proceed to dominate the NHL for the next 20 years.

There’s every chance, though, that he’ll stumble out of the gates and be subject to the kind of intense scrutiny and pressure usually reserved for the high profile, multi-million dollar superstar veteran player perceived of as being a free agent bust. But Justin Schultz hasn’t earned his high profile – any profile he has is a product of unrecognized potential and the exploitation of ridiculous loophole. Even if he doesn’t falter – if he’s simply ‘okay,’ will it be fair to Schultz to be the recipient of such pressure? Not necessarily, but in conducting this circus like he and his agents have, he’s brough it upon himself.

Schultz could have made it so much easier. The Ducks had every intention of signing him at the end of last year and putting him directly into their line-up. This would have burned one whole year off of his two-year entry-level deal, thereby making him a Restricted Free Agent following the conclusion of the 2012-13 season. He would have established himself (at least to some degree) as an NHL player – but instead he’s set to enter the NHL as perhaps the highest-profile 22-year-old rookie in recent memory, with all the pressure that that entails. He’s essentially asking teams to bet  on him, and there seems to be no shortage of organizations ready, willing, and able to ante up. That’s ballsy.

Regardless of whether or not he thinks he’s ready for that kind of scrutiny, he’s setting himself up to fail, and depending on which team he signs with (four Canadian teams are reportedly in the mix, including Toronto), the demolition show could be spectacular to watch.

According to TSN’s Bob McKenzie:

By the time this piece is published, it is very likely that it will have leaked out just which team Schultz intends to sign with.

And on July 1st, Justin Schultz will do just that, with whichever team he decides will provide the best fit for him going forward. In one way, the circus will be over, but in other ways, it will have just begun. One thing is for certain: the first game between the Anaheim Ducks and [Insert_Team_Here] will be one to circle on the calendar.

(For what it’s worth, he seems to have lost a fan in Duck-for-now Bobby Ryan)

13 thoughts on “Justin Schultz Is Setting Himself Up For Failure”