New York Rangers rookie Lias Andersson made his debut on Monday night against the New York Islanders at Madison Square Garden. He may only be 18 years old, but he is competing for a spot on the opening night roster, head coach Alain Vingeault said as much on Monday.

It was a noteworthy offseason for the Rangers. They made a huge trade when they parted ways with Derek Stepan, who played the first seven years of his career with the Rangers, and then on the first day of free agency they made a big splash by signing Kevin Shattenkirk.

Trades and signings are part of every offseason. Do you know what isn’t? First round picks. The last time the Rangers had a first-round pick, they selected Brady Skjei 28th overall in 2012. Skjei has blossomed into a good player, but that was five years ago. Cut to 2017 and the Rangers had not one but two first-round picks thanks to the acquisition of the seventh-overall pick from the Arizona Coyotes. That pick turned into the 18-year-old Swedish forward Lias Andersson. 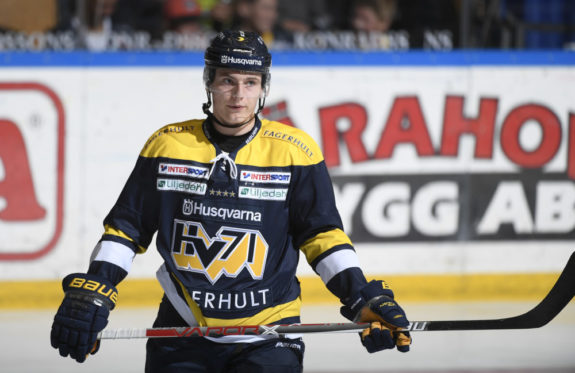 It was unfamiliar ground for Rangers fans during the draft, as they have not seen a top 10 pick since Dylan McIlrath in 2010. I think it is safe to say, that one did not turn out well. So, as the Rangers are about to embark on another quest for the Cup with the aging Henrik Lundqvist in net, Andersson could prove to be an impact player as soon as opening night.

The Rangers came under some criticism for the pick, as he was considered a reach. However, he received some high praise about his play and work ethic this summer at the World Junior Summer Showcase from his coach Tomas Monten.

“Lias is a player that leaves everything on the ice every time,” Moten said. “That’s a big key factor for your team. We need the leadership, that kind of work ethic on the ice.”

He has shown an eagerness to learn about the game, mentioning in the video below how he has adapted to playing on the smaller ice and the sort of tempo required to succeed. This sort of understanding is crucial in the development of a young player. He knows the NHL presents a new set of challenges and discusses ways to overcome those hurdles.

"I’m going to get goosebumps out there at the warmups.” – @liasandersson on making his @TheGarden debut tonight for #NYR. pic.twitter.com/hqAUM9mEkO

In the interview, Andersson credits J.T. Miller with teaching him some “face-off things,” which is interesting. In his 5 year career with the Rangers, Miller has been used at both center and on the wing. However, his 157 face-offs last season was a career high. He has probably learned a thing or two to pass onto Andersson, who is also a center, but, like Miller, is capable of playing on the wing.

With these traits in mind, it is easy to see Miller becoming a positive influence on Andersson and helping the young Swede to develop his skills at center. It is worth noting, Andersson won seven of his 11 face-offs Monday night against the Islanders.

Alain Vigneault Likes What He Sees

In a press conference, head coach Alain Vigneault fielded some questions that touched on what he’s liked out of Andersson saying, “What I’ve seen so far, I like [his] skill set. I like the energy he brings. I love the way he interacts with his teammates.”

Vigneault compared Andersson’s interaction with teammates to Mats Zuccarello, who gleaned information from former teammate Marty St. Louis. “I see the same type of personality as far as asking questions,” Vigneault said, “I hear that in his teams back home he had been a captain and leader. I believe that in Lias’ case we have real good personality and a real good person.” This sounds promising for the Rangers, who lost a leader in Stepan. The early impressions of Andersson seem to indicate he could be a viable candidate to fill those shoes.

If Andersson does make the team, he would be the first 18-year-old to play a regular season game with the Rangers since Dan Blackburn way back in 2001.

The @NYRangers haven't had an 18 yo play a reg season game since Dan Blackburn in '01. Lias Andersson and/or Filip Chytil could change that.

Remember Dan Blackburn? That’s a name from the past. Anyway, it would be a heck of an achievement to make the opening day squad at that age, but making the cut is not the ultimate indicator of success going into Andersson’s rookie campaign. It’s staying power, and that requires intelligence, a strong work ethic, and the inclination to learn. All traits that the young Swede seems to possess.

Erik Haula Would be a Great Fit for the Penguins

How Alternate Sites Can Lead to NHL Popularity Growth

Riveters’ Tatiana Shatalova: From Belarus to the Metro