Be sure to stop by THW’s “Book Room” page dedicated to book reviews.

Stumbling On Wins: Two Economists Expose the Pitfalls on the Road to Victory in Professional Sports 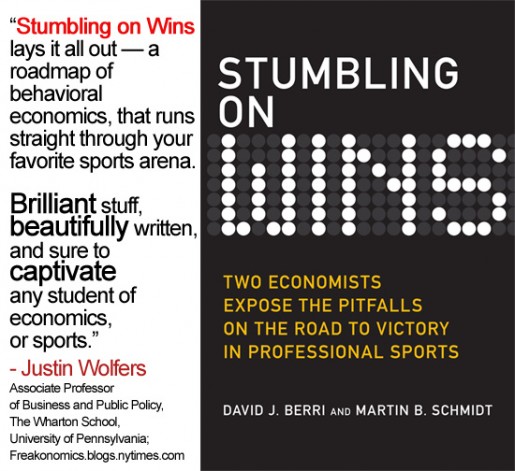 It’s admittedly difficult to sum up this book better than this statement:

“’Moneyball’ should have been called ‘MoneyBaseball.’ Stumbling on Wins covers everything else.” — Darren Rovell, CNBC

Michael Lewis’ classic Moneyball helped bring complex sports statistical analysis to the limelight. While baseball remains at center stage amongst major league sports and stats analysis, other sports including hockey have also seen somewhat of a revolution in terms of how in depth the breakdown of stats and events can get.

Beyond the stats, economics has also invaded major league sports. HockeyNomics was one such book to skim the surface of blending hockey, advanced statistical analysis and economics. As I noted in my book review of that book: “HockeyNomics explores various questions not just based on opinion, but based on unique statistical analysis. In the process, the reader is often left to draw his own conclusion from the data presented. In each exploration, however, Norman has achieved what I believe to be his main goal – to challenge the reader to think outside the box and realize the daily box scores and scoring leaders far from tell us the whole story.”

You know the times they are a changin’ when traditionally ran teams like the Calgary Flames are now led by innovative personnel such as GM Jay Feaster, who hired Chris Snow as Director of Statistical and Video Analysis. As THW’s own Mike Colligan reported on Forbes Sports Money:

But most fans still see hockey as a game of flow managed by former players making decisions based on instinct and decades of experience. Chris Snow has seen first-hand how quickly that culture can change.”

Back to the task at hand – Stumbling On Wins is yet another intriguing entry in the realm of sports statistical analysis, as well as sports behavioural economics. Admittedly, I did not agree with several of the conclusions drawn by the authors, especially pertaining to hockey. However, I was in fact pleasantly surprised to see the NHL referred to at all in a sports economics book that also reviewed subject matter from all of the major North American sports. As well, I think the authors accomplished much of what they set out to do – generate thought-provoking concepts for the thinking sports fan.

The following points highlight a sampling of some of the information presented in the book that resonated with me. Please note I’ve only provided some key points and have purposely not elaborated in depth as I encourage you to read the book to gain further insight.

What Others Are Saying

“If you’re a general manager in basketball, baseball, football or hockey, going about your business the same old way things have always been done, this book is that clock radio in your hotel room. You didn’t even set an alarm, but there it is, annoyingly blaring to life. Aghast, you don’t know how it turned on, nor how to turn it off. You just want it to go away. But guess what, unless you can figure out how it works, it’s not going to shut up.”  – Henry Abbott, ESPN

From FT Press, the book’s publisher:

Don’t they want to win? Every sports fan asks that question. And no wonder! Teams have an immense amount of detailed, quantifiable information to draw upon. They have powerful incentives for making good decisions. Everyone sees the results of their choices, and the consequences for failure are severe. And yet, they keep making the same mistakes over and over again…mistakes you’d think they’d learn how to avoid!

Now, two leading sports economists reveal those mistakes in basketball, baseball, football, and hockey—and explain why sports decision-makers never seem to learn their lessons. You’ll learn which statistics are linked to wins and which aren’t…and which statistics can predict the future and which can’t (information that just might help you dominate your next fantasy league!).

The next quantum leap beyond Moneyball, this book offers powerful new insights into all human decision-making. Because if multimillion dollar sports teams are getting it wrong this badly, how do you know you’re not?