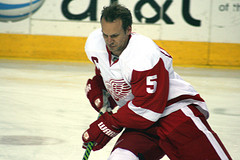 Anything can happen in Game 7. The Washington Capitals found that out a couple of weeks ago, and the Penguins failed to avoid the same fate last night, losing to…

Following up on back-to-back appearances in the Stanley Cup Finals, can the Penguins win it again? Here are ten reasons why they’re likely to fall short.

Just like 2007 and 2008, the Pittsburgh Penguins will begin their playoff run against the Ottawa Senators. In the ’07 playoffs, the young Penguins seemed just happy to be there…

By Mike Miccoli, Special to NHL Trade Deadline In a day that many hockey fans circle on their calendar each year, the trade deadline is the final opportunity for NHL…

The boos rain down from the orange-clad stands of the Wachovia Center. Sidney Crosby stands at center ice with the puck on his stick. As he skates forward, the crowd’s…

The 2000s have been an up-and-down decade for the Pittsburgh Penguins. Today we look at the best players to suit up for the Penguins over the last decade and name the “Team of the 2000s.”

Christopher Ralph is a staff columnist at THW. As I watch the conference finals and as much as I want to see a Penguins – Blackhawks final, I am facing the…

The season may be winding down, but there’s still the playoffs lurking right around the corner. It may seem like a short time, but the offseason is a long way off. While some teams will undoubtedly be looking at the 09-10 season sooner than others one thing is certain; the elite teams that have spent up to the salary cap ceiling will have to do some creative work to hold together for next year.

I’m not going to type a long, drawn out play-by-play here but I will say this about the 2009 ASG Skills Competition: It’s great to see these guys get into…