A mere four days after Sweden announced their women’s roster for the 2018 PyeongChang Winter Olympics, their men’s team was announced. As to be expected, the roster is chock full of familiar names. Included among the talent is a Stanley Cup champion, as well as a 17-year-old who is anticipated to be at the very top of the 2018 NHL Draft.

There is unfinished business on the table as far as Sweden is concerned. Their men’s U20 came ever so close to winning the gold medal in Buffalo at the World Juniors. In the end, the silver medal would belong to them. The following week, the U18 women came away with a silver themselves at the tournament in Moscow, Russia. Between a loaded women’s national team roster heading into South Korea, and this roster below, the Swedes have two more opportunities to add more silverware to their 2018 collection. Tre Kronor hopes that one of those pieces will be a gold.

Jonas_Ahnelöv (#51) will be a physical defenseman for Sweden in PyeongChang ’18 (By Frankie Fouganthin (Own work) (CC BY-SA 4.0 (https://creativecommons.org/licenses/by-sa/4.0)), via Wikimedia Commons)

THW takes a look at how Sweden’s men’s finalized 25-player roster is compiled. Not surprisingly, there is a smörgåsbord of KHL players and former NHL talent. Here is how their roster will look for the upcoming games in PyeongChang: 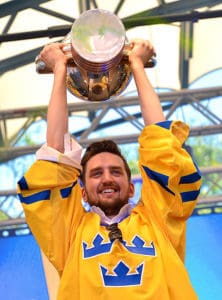 Jhonas Enroth will be participating in his second Winter Olympics for Sweden (By Frankie Fouganthin – Own work, CC BY-SA 3.0, https://commons.wikimedia.org/w/index.php?curid=26396754)

For the bulk of his professional career, Jhonas Enroth has been a pretty good goaltender. Many in Buffalo felt that he could have even been the Sabres starter. Playing in parts of six seasons with the Sabres, Enroth played admirably well. His finest campaign was the 2013-14 NHL season when in 28 games he posted a 2.82 goals against average and a .911 save percentage. After the Sabres shipped him to the Dallas Stars in an obvious effort to “tank” the season, Enroth never really quite caught on. He would have stops with the Los Angeles Kings and the Toronto Maple Leafs as well. In 153 career NHL games, he posted a record of 50-69-16. That includes a .909 SV% and a career 2.84 GAA. Enroth would be very deserving of a starting role in PyeongChang. This season with the KHL’s Dinamo Minsk, Enroth has been awesome – in 48 games, he has a 2.02 GAA and a .924 SV%.

If Enroth is not the starter, then it will fall upon the shoulders of Viktor Fasth. At the very least, the two will split goaltending duties. Fasth seemingly came out of nowhere during the 2012-13 season with the Anaheim Ducks, and surprised with some excellent numbers of 2.18 GAA and a .921 SV% in only his first year. Trouble was, those numbers would dwindle as did his performance to some extent as Fasth played just two more NHL seasons with the Ducks and the Edmonton Oilers. After a mired 2014-15 season when he went 6-15-3 for Edmonton, with a rather sheepish 3.41 GAA and .888 SV%, Fasth absconded from the NHL and moved over to the KHL where he played brilliantly for two years. He has continued to do the same having returned to his native Sweden and playing for Växjö Lakers HC.

Magnus Hellberg is an interesting selection to make the squad. Not that his selection should be questioned – he belongs on the team. It’s just that there are a lot of unique things about him. First of all, he is much larger than either Enroth or Fasth, as he stands 6-foot-5 and over 200 pounds. Secondly, Hellberg may have had a couple of the worst first two games in NHL history. Originally drafted by the Nashville Predators in 2011, he would play only one game for the team. Coming on in relief of Carter Hutton, Hellberg allowed one goal on four shots for an inflated 5.00 GAA and a .750 SV%. After being traded to the Rangers, he would have a similar showing as Henrik Lundqvist’s backup when he allowed two goals on six shots to the Washington Capitals. After those first two showings, Hellberg fell into a rhythm and did rather well. He would have much better showings in his final two career games with the Rangers. Now he is the starting goalie for the KHL’s Kunlun Red Star. In 47 games this year Hellberg has a 2.33 GAA and a .927 SV%.

If the starting nod does not to Enroth, then it will be Fasth or both of them sharing the duties. Hellberg is still a nice option given his size.

Sweden has chosen to go with eight defenders for these Olympics. Of the veterans selected, the most recognizable would be Staffan Kronwall. The big 6-foot-5 defender has played six straight seasons in the KHL for Lokomotiv Yaroslavl. North American fans will certainly recall him from his 66 NHL regular season games spent between the Maple Leafs, Washington Capitals and Calgary Flames. At 35, Kronwall is the oldest of all Swedish defenders, and second oldest skater on the team by only a few months.

It may be interesting to form a top defense pairing for Sweden by using Kronwall with 17-year-old phenom Rasmus Dahlin. No defender at the 2018 World Junior Championship was better than Dahlin. In nearly every instance, Dahlin looked like a man among boys in Buffalo. Now he will take his game to the biggest stage. He finished the World Juniors with six assists in seven games, which tied him for second place. Dahlin was also a plus-10. Even at 17, he could be Sweden’s best defender in PyeongChang. If he does not perform the best, it is only due to his age as he is certainly the most skillful regardless. Dahlin is widely recognized as the favorite for top overall selection for the 2018 NHL Draft. 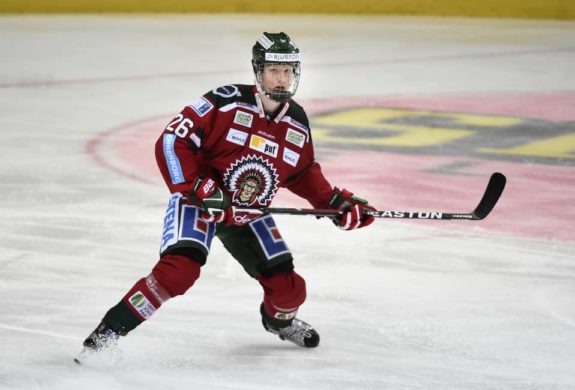 Jonas Ahnelöv is a big, punishing defenseman and will get the job done for Sweden in his own zone. He has played three straight seasons for Avangard Omsk in the KHL. Ahnelöv was originally drafted by the Coyotes back in 2006, and spent three years in their organization playing for the San Antonio Rampage. Playing in Omsk this year he has scored three goals and seven assists in 40 games. At 6-foot-3 and 220 pounds, Ahnelöv will be the Swedes’ muscle.

The most skillful forward on Sweden’s roster is Viktor Stålberg. He won the Stanley Cup with the Chicago Blackhawks during the lockout-shortened 2012-13 season. Stålberg has 488 regular season games to his credit, and played for the Blackhawks, Toronto Maple Leafs, Nashville Predators, New York Rangers, Carolina Hurricanes and Ottawa Senators. His best season came with Chicago in 2011-12 when he potted 22 goals and 21 assists in 79 games. Stålberg is a tremendously fast skater, and has excellent size at 6-foot-3 and 209 pounds. 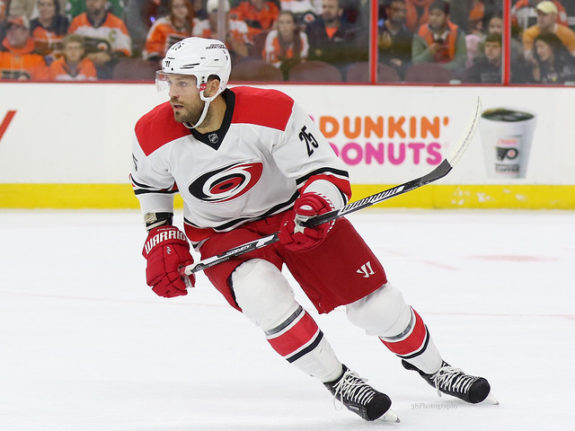 Oscar Möller had a relatively brief NHL career with the Los Angeles Kings, but is still a talented hockey player. He has played back to back seasons in the Swedish Elite League with Skellefteå AIK, after having played two in the KHL. During the 2013-14 season with AIK, Möller scored 27 goals and 18 assists in 48 games. Part of why Möller’s abilities never translated to success in the NHL is because the Kings already had a logjam of talent on their team and in their minor league system before they went on to win two Cups. Möller accounted for 12 goals and 14 assists in 87 games during parts of three seasons in L.A.

Never quite measuring up in the NHL, Linus Omark has played four very solid seasons in the KHL, both for Jokerit and Salavat Yulaev Ufa. Playing for Edmonton and Buffalo, Omark had a mere eight goals and 24 assists in 79 NHL games. One might say satisfactory at best. In the KHL, however, he has potted 80 goals and 163 assists for 243 points in 280 games – nearly a point per game player. 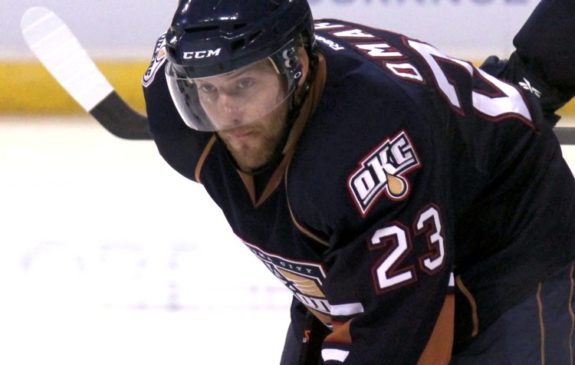 Linus Omark never quite caught on in the NHL, but his success in the KHL is proof enough he will have an impact for Sweden in PyeongChang (Ross Bonander/THW)

Of course, there is also “King Henrik’s” identical twin brother Joel on the team too. He has 134 games of NHL experience behind him, all with the Dallas Stars. More importantly, Joel Lundqvist has 352 points in 633 Swedish Elite League games in a long, successful career for Frölunda HC.

The Swedes have just as good a shot to win gold in PyeongChang as anybody. The NHL and KHL talent on the roster is similar to other countries who have announced their final rosters. In fact, they may have one of the better teams, at least on paper. There won’t be any need to worry about goaltending. All three Swedish netminders are reliable and can get the job done.

It will be especially pleasing to watch Rasmus Dahlin partake in these games. Granted, the level of talent may be watered down compared to what he will face in the NHL someday. But in many ways that is irrelevant – there will be truly talented players in PyeongChang on his roster and against it. A number of them have won and lost Stanley Cups. It will be very interesting to see how he measures up. Just think – Dahlin is 17, while USA’s team captain Brian Gionta will be 39 by the time the games get started.

Almost as interesting as what Dahlin will do in PyeongChang is getting the opportunity to see what once-highly heralded NHL prospects can do for Sweden. Möller, Carl Klingberg, Anton Lander, Joakim Lindström, etc. – these were all players selected within the first two rounds of their draft years. This may be their one and only opportunity to win an Olympic medal. With a relatively even playing field, the Swedes could, in fact, take gold.